SWTOR - Tips for Trash in Operations

Hello everyone, today I'm going to talk to you about trash mobs in operations, you know, those friendly enemies, devoted to their master who are going to attack you on sight for the sole purpose, let's be frank, to slow you down ...

Admittedly they are not Bosses, but they are part of the raids and deserve a little our attention. They come in all kinds, sizes, strengths and quantities.

While some are just small posts without talent (I will not dwell on it), some should be approached with more caution and reflection or simply with a minimum of mistrust vis-à-vis certain characteristics of these mobs. In addition, in order to come to the aid of the "lootovaure" that you are, I will also try to help you avoid as many mob packs as possible in order to waste as little time as possible between the bosses, who are the only guardians of your precious sesames. I hope this won't shock PvE purists and players hungry for legacy points;). 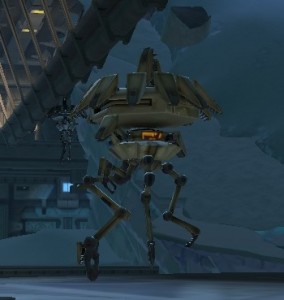 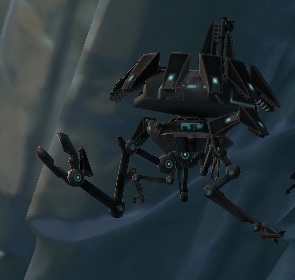 They are not normally a problem. You just have to note that the black probes (on the right), unlike the brown probes (on the left), will throw you. Knowing that from a certain place in the room, there are several black probes, and a large void in the middle, be careful not to place yourself between a black probe and the void, otherwise you risk doing your baptism of free fall, without a parachute and having to return on foot at reduced speed, your friends being in combat again;).

Second set of mobs after the Annihilation Droid XRR-3, just before Gharj:

In a charming little tunnel, very warm, that's the case to say it, you will meet 3 small herds of mobs, for simplicity we will say that it looks like dogs, both in appearance and in the little cries of distresses they push. So, for mobs, they have a lot of HP and normally "restricted space + concentrated pack = Aoe party" but I will try to simplify your life: the void, which the moment before was your worst nightmare will become your best friend.

It's simple, your tank, equipped with its defensive CDs, will pull the mob packs (all 3 if possible), and quickly go back, exit the tunnel and approach the void of the previous room. No Dps, and no heal (if possible) so as not to regain aggro and keep a nice pack. Then give free rein to your bump in order to destroy the dogs from the bottom. By the way, avoid doing all your bumps at the same time, do them one by one in order to always have one in reserve in case of fail. 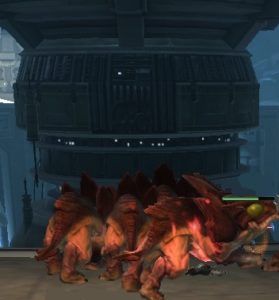 Note that it is possible that a dog, so loyal to his master, magically ascends, you can once again indicate the direction to take. In addition it is "normal" or at least not very serious that you are still in combat although all the dogs have fallen, it is common and that does not prevent you from continuing, you will pass out of combat a few moments later.

Avoid wildlife in the jungle after Gharj:

After having got the better of this dear Gharj, you change the scenery and enter a pretty jungle, unfortunately populated by a few hostile creatures. Here is a map where I present to you in red the route to follow and by the green diamonds, the packs of mobs, normally faced in an ordinary path, that you will avoid. 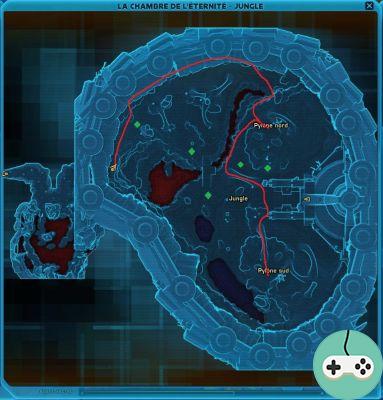 The main thing is to take the first rock next to the first green diamond. After having traveled the edge of the map, a small mountaineering session is offered to you (watch out for the lava!). The first group stays on the north pylon and those in the south can walk along the lava and go through the "vegetal bridge" to avoid the two packs at the bottom and join the south pylon.

In the Court, from the start of the operation:

Karraga, a benevolent host, sends you a welcoming committee as soon as you enter the courtyard of his palace. I suggest a small "bis" path to avoid the first pack. So I know, it's not a huge time saver, especially since the little pigs are rather weak, but it will always be useful to the most impatient among us. You will be forced to use force for the mob pack at the palace gate anyway. 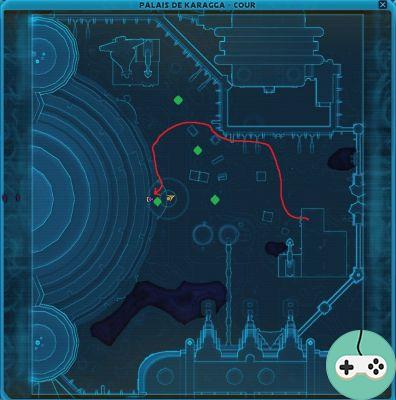 Just before entering the sewers like ninja turtles, you will have to face a rather special pack since the death of one of the enemies (not just any) will result in the death of the others. Then ask your DPS to silence him (Gamorean Machine Healer), it will only be a matter of a few seconds. Here is a small screen that will allow you to easily spot it: 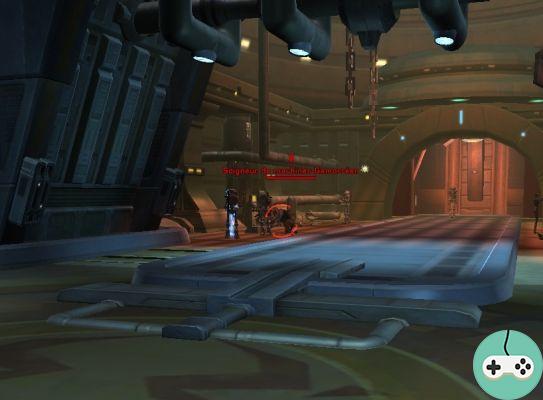 In the area before the Foreman Shredder:

After having slain a few small rats, you see the end of the tunnel, the light from the outside attracts you but be careful, don't go any further, I suggest you save time by avoiding rather powerful mob packs. 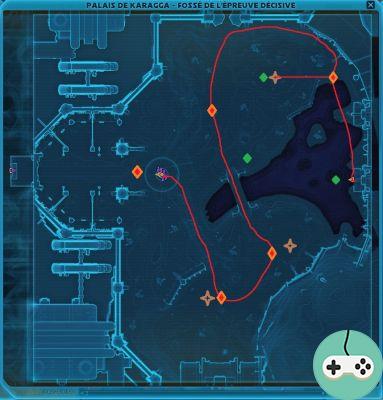 In green the main packs that you will avoid, in orange, the mobs that you will face, knowing that the 3 orange diamonds which are not on turrets are made up of only one enemy. As soon as you come out of the sewers, you have to shave the wall on the right so as not to aggro the pack in front of you, beat the first enemy sitting in the grass. While the rest of the raid follows the route, one of the players can activate the first turret without aggro, just climb behind it and move forward millimeter by millimeter until you are within range of the console. No need for fufu to approach, although that reassures a little whoever sticks to it;). 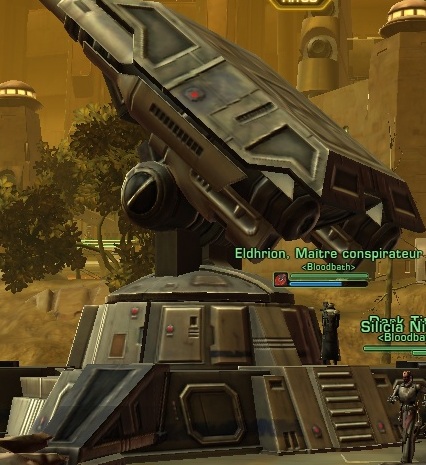 Then the second diamond is a patrol, which also has the annoying tendency to grip you. So you have to be careful not to aggro the patrol near the few other mob packs that surround the area, I advise you to ask a specialist / vanguard / assassin / shadow to use their grappling hook to eliminate it in a safe area. Now you have to follow the red path and eliminate the enemies in front of the other two turrets. Go up to the boss, face the last mob and get ready for battle (be careful, this mob is a little stronger than the others).

After the Crusher Foreman and after the Heavy Manufacturer:

Right after these two bosses, you encounter mob packs that require meticulous organization. These packs are composed as follows:

-A Probe, immune to CC and interruptions, it will continuously cast an audible alert that calls for reinforcements that accumulate until the death of the probe (to kill very quickly you guessed it)

-Technicians / specialists, not immune, who will treat the alarm probe (above) that you are trying to kill as quickly as possible, so you have to put them out of harm's way with checks (avoid aoe). New difficulty, for the pack in the Heavy Manufacturer's room (picture 2), you have to control them at the same time because they have the ability to free their incapacitated friends if they themselves are not under control. In the event that there is an error in the CC synchronization, nothing serves to focus the probe, the heals it will receive will be higher than your DPS however good it is, you just have to kill as quickly as possible possible technicians / specialists to switch after on the probe. 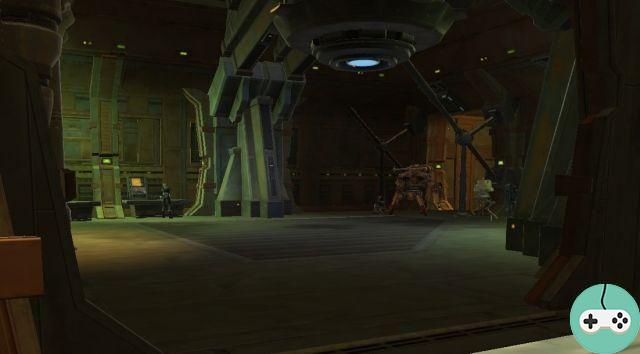 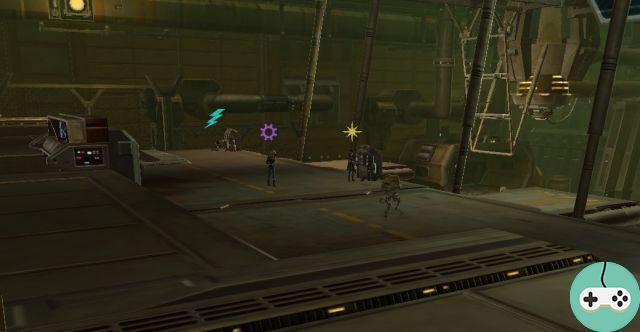 A few mob packs consisting of a turret, a staff master, and two other guys.

The two enemies on the sides can be controlled. Once these two are out of action, you need to pull the big bad guy in the middle and pull him away from the turret, which is fixed, so you can easily put the whole party out of turret range. Now here you are 8vs1, it does a lot of damage but should drop quickly. Be careful, this mob will force some members of the raid into the air. However, you observe some small voids in the combat zone, which will make you fall into what looks like the false skeptic of Karraga (poison damage), impossible to go back up unless a wizard / scholar friend quickly draws you towards him. Then you have to destroy the turret which will also throw you so there again beware of falls synonymous with dead. Then continue on the last two to overcome the pack.

So, while waiting for the next operation I think I have done the tour (do not hesitate to point out errors and absences to me).

All these tips have been tested and approved several times.

Hoping to have made your progress in these operations a little easier, good game to you!

Add a comment from SWTOR - Tips for Trash in Operations