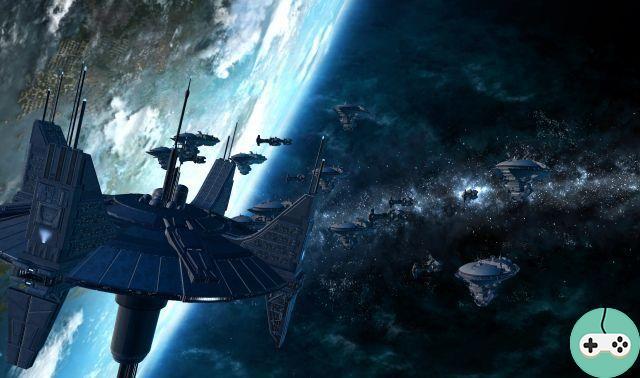 War creates certain situations and these are sources of opportunities. Thus, by being in the right place at the right time, we can become a legend. But as the Jedi say "a lot of the truths we hold depend primarily on our own point of view." So who can tell if a moment is good or bad? A catastrophe may very well become the source of a very great victory. And a teenager accused of murder may well give his name to the Republic's main military base. 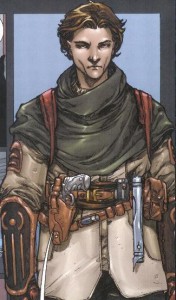 Zayne Carrick was born in - 329 before the Treaty of Coruscant on Phaeda, planet of the Cademinu sector on the Outer Rim. The third in five children in a family of which he is the only son, he was spotted by the Jedi and joined a group of initiates on Dantooine. At that time, the Jedi did not sever ties with those close to them, and he still maintained some relationship with his own. It was the keeper Lucien Draay who became his master, and he took him with him to the brand new enclave of Taris. Unfortunately, the five masters of Taris belonged to the Jedi Pact, a group within the Jedi Order that manipulated certain events to make politics work for them. A vision warns these masters that they would be killed by someone wearing the spacesuit their apprentices were wearing. With big words the big remedies, it was necessary to make a sacrifice. Unable to identify the threat, they decided to eliminate their five apprentices. They invited them to a great ceremony under the pretext of honoring them and raising them to the rank of knight. But it was because of Zayne that his comrades began to have doubts. He was the dunce of the class, absolutely not ready to rise to the next rank. But it was too late to escape the assassins. When the latecomer arrived there, he could only see the corpses. He managed to escape with the help of Snivvian criminal Marn "Gryph" Hierogryph and Arkanian fugitives Gorman "Camper" Vandrayk and Jarael. Unable to catch him in time, the masters accused him of the murders of his four comrades and unleashed many bounty hunters after him. 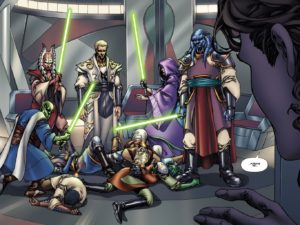 For months, Zayne Carrick sought to prove his innocence. Which wasn't easy at first, but the context didn't help. It was the year - 311 BC. TC, the year of the Battle of Vanquo, the first battle of the Mandalorian Wars in Republican territory. In fact, Zayne and his allies witnessed firsthand what happened in Vanquo. They participated in the capture of Demagol by the Revanchists on Flashpoint. One of their leaders, Alek Squinquargesimus, the future Darth Malak, befriended him. He was also present in Serroco when the Mandalorians bombarded the Republican fleet. He was captured by the future Admiral Saul Karath, but escaped during the Battle of Omonoth where the group lost Campeur. Finally, it was while returning to a busy Taris that he encountered a real beginning of the trail in the person of Celeste Morne, shadow of the Jedi Pact. She was looking for an artifact containing the ghost of the Sith who had created the rakghouls. He succeeded in making her doubt his superiors and she pointed out to him where he could refute his suspicions or find evidence. He also saved Cassus Fett's troops from massive rakghoul contamination, earning him recognition as the Mandalorian warchief. He eventually finds enough material to present to the Jedi Council for them to intervene before justice and the innocent, as well as get rid of the pact shenanigans. But not until one of Taris' masters decides he has had enough and testifies on his behalf. The Jedi proposed that Zayne return to the Order and pass the trials to become a knight. But he refused. What he had seen during all these months on the run encouraged him to retain a certain freedom of action. By the way, the prophecy that was to kill the masters of the Jedi Pact did not concern one of their apprentices. The suit of the last of them was worn by most of his party, and it was Marn Hierogryph who was most active in their deaths. 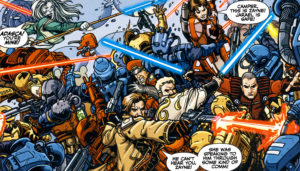 Now that he was free, Zayne Carrick founded two companies. The Rogue Moon Project (name of the moon in Taris where the masters of the Jedi Pact had their vision) with the families of his former comrades in Taris was used to help many refugees from the war but also to find accused people in twists to give them the means to defend themselves. And with Marn Hierogryph, Cargryph Capital a very classic business company. With his friends, he got involved in the fight against pirates and slavers. He was involved in the escape and death of Demagol. He also became a champion of swoop races. The Revanchists courted him, but it was not with them that he reinvested in the war. When the Mandalorians arrived on his home planet, he joined the local militia to help them defend themselves and thus found himself embroiled in the case of the Mandalorian Knights (four Jedi who were fighting on the other side). He also worked with Captain Dallan Morvis, of whom he became one of the advisers. A busy life then. 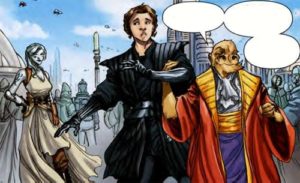 To some, Zayne Carrick was an unfinished Jedi, insecure and erratic with the Force, and an unbelievably unlucky one who found himself in impossible situations. But, for the majority, he is above all a hero of the Mandalorian Wars. One that can be celebrated without facing the specter of the Dark Side that accompanies all of those who have followed Revan. And he came out of these situations with great panache. The career of his partner Marn Hierogryph, a specialist in propaganda, should not be ruled out either. It is not for nothing that we gave its name to the large station where the Fleet of the Republic is found.


Do you want to be up to date and know all the tricks for your video games? In gamesmanagers.com we enjoy playing as much as you do and for that reason we offer you the best tricks, secrets or tips for you to play non-stop. We offer you quality content and always updated to keep you up to date. That's why, in our website, you will find not only videogame guides but also tricks, secrets and thousands of tips so you can play to the limit. Are you ready to get it? Enter now and enjoy your videogame!
GW2 - Written RP: Gor Tokren ❯

Rift - The Cairns of Storm Legion

EoN: the return of news?

Add a comment from SWTOR - Wrong place at the right time