A band of dissident Mandalorians have captured a Republic ship. Objective: to recover it and prevent it from falling into the hands of the Imperials who want to add it to their fleet. And of course, if you're on the Imperial side, grab it before the Republic.

To start it, please go to the area "Departure of missions => Hangar of the transport vessel" of the Imperial fleet or the Republic, a holoterminal awaits you there to brief you. Dark Malgus (Empire) or Shan villages (Republic) will explain to you that a ship has been captured by a Mandalorian clan. The motivations of your Empire / Republic leaders being different, we still have the following objective: to recover the ship. Let's go for the adventure! 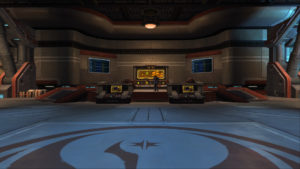 Both dogs cannot be taunted, and on top of that, as soon as they get close to Braxx, his damage increases. The best solution in this case is for the tank to taunt the boss, then take him away from the group, best being near the door with the red rays on the left and sticking against the wall. It will be easy for him to keep it on him, the boss having the annoying tendency to jump on players who are a little too close.

The two DPS and the Healer will therefore focus on the two Dogs, one after the other. They are not very mean, but can still represent a certain danger, especially when they are both. Once one of the two is dead, it immediately becomes easier for the Healer, so feel free to use the markers to eliminate one first quickly. 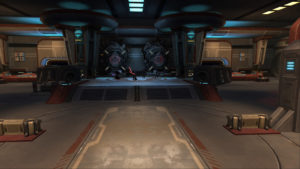 In front of you are 4 enemies, each representing one of the 4 classes of the opposing faction. Here the markers will be important, to be able to coordinate and eliminate these enemies quickly, preferably in this order:

Whenever an enemy is defeated, the remaining ones fight more aggressively, and gain additional abilities.

One technique that can be quite effective is to group them together in one place and bombard them with AoE, like in this image: 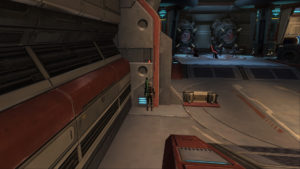 Gather together in this place, let them come, and swing the zones! 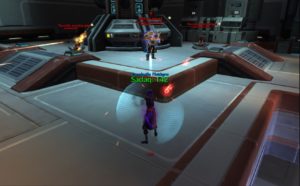 At first, the boss will regularly place himself in three corners of the room (every 20% of health approximately), spawning turrets. It is important to stop shooting the boss as soon as they appear and focus on them. As these spawns are tied to the boss's hit points, you could quickly get overwhelmed if you continued to deal damage.

So with each appearance, take care of the turrets exclusively, then once destroyed, go back to the boss. After three spawns of turrets, he will jump in the middle for the grand finale, and you can eliminate him in peace.


Do you want to be up to date and know all the tricks for your video games? In gamesmanagers.com we enjoy playing as much as you do and for that reason we offer you the best tricks, secrets or tips for you to play non-stop. We offer you quality content and always updated to keep you up to date. That's why, in our website, you will find not only videogame guides but also tricks, secrets and thousands of tips so you can play to the limit. Are you ready to get it? Enter now and enjoy your videogame!
Staxel - A few tips for getting started ❯