Rakghoul epidemic, murky atmosphere and shrill cries worthy of a survival horror, this is what awaits you in this contentious zone.

The planet Kaon is a victim of the rakghoul plague, the epidemic is spreading rapidly on the planet. You are sent there to investigate this disease and why it has appeared.

Meet on the fleet ship Gav Daragon / Shadow of Ziost, in the Tion operations hangar.

Note: You may find in this ZL a bonus boss linked to the Rakghoul Resurgence event, which can drop a "Midnight Rakghoul" Pet.

From the start of the ZL, a step-by-step mission is offered to you, giving you access to a bonus boss: 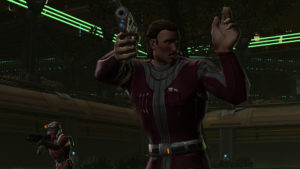 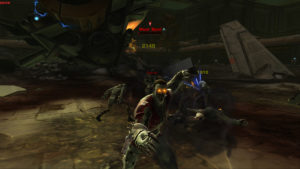 A group of infected will come to invite themselves to the party. Eliminate them quickly. You will then realize that Major Byzal accompanying you is not in great shape. You have to choose:

On the way, beware of the Bloated Contaminants. As soon as their health approaches zero, they turn all green and explode after a few seconds. You are strongly advised to back down in these cases. 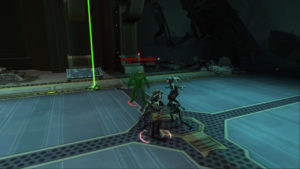 A little further, in the tunnels of rubble, certain groups can harm your group. Do not hesitate to use your dizziness on them, especially on the Mercenaries. 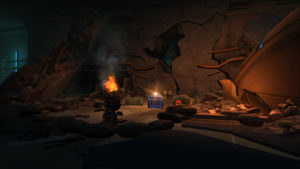 It is not a boss strictly speaking, but a phase which still requires organization. To be able to move forward, we will have to blow up the wall behind, but it will take time, and the rakghouls are arriving en masse. We will therefore have to eliminate them with the cannon, a bit like in the Colicoid War Game ZL.

Rather, it is advisable that one of the DPS (not Ranged if you only have one in the party) take control of the cannon. The Ranged DPS will stay behind with the Healer, and the Tank will stay near the cannon to pick up enemies that have escaped the cannon.

A little tip for Ranged and Healer DPS: You can use the scenery to climb up the small hole in the wall, which will protect you from enemy attacks. Follow the indicated path to get there. 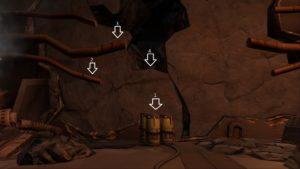 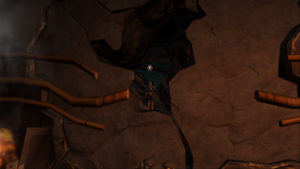 A little tip for the player in the cannon: it is easier to look at the minimap to detect where enemies are placed and thus know where to fire the cannon. 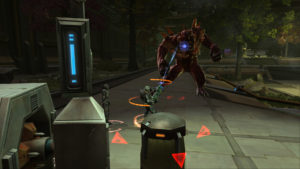 In the four corners of the park area, you will find cans of explosive fuel. They will be of great use to you in coming to terms with this atrocity. 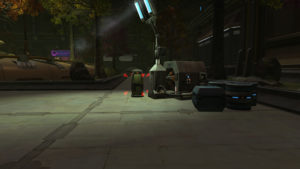 Indeed, at certain moments of the fight, a message will warn you that "the monster has gone mad". 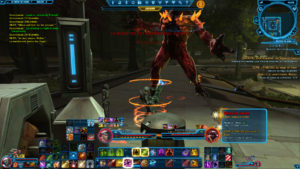 He then has a buff that allows him to absorb most of the damage. It will therefore be necessary to bring it near a can (really close, otherwise it does not work), then explode it to remove this buff and be able to inflict normal damage on it. This tactic will have to be repeated 4 or even 3 times in the fight depending on your DPS. 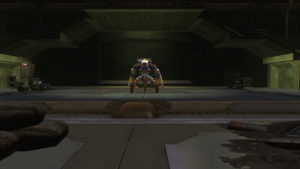 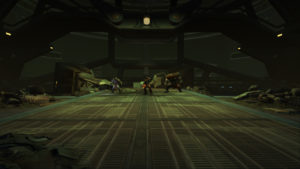 When one of the three dies, a tainted wave appears. Eliminate them quickly with damage spots.

It is not possible for the Tank to provoke enemies, so they will have the unfortunate tendency to attack just about anyone in the group. It is advisable to eliminate them in a certain order: G'klarg first, then Chak'aghakh then finally the Commander. Feel free to use the target markers to make your job easier.

add a comment of SWTOR - ZL: The Siege of Kaon (Story)