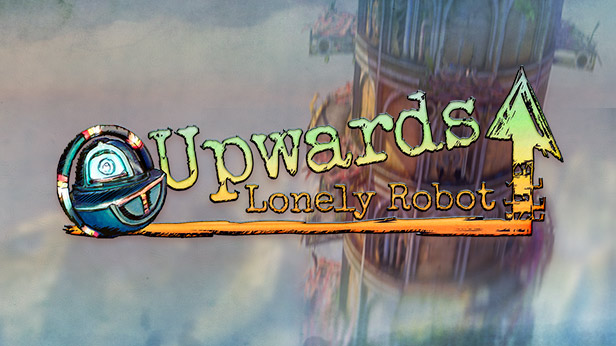 The old ones (like me!) Will perhaps remember Marble Madness, a game with an ultra simple concept: to direct a marble in an environment while avoiding certain pitfalls.

Upwards, Lonely Robots will take up this concept a bit, but instead of a horizontal plane, gigantic towers will have to be climbed with his small ball.

To situate the story a bit, some crazy scientists wanted to create a kind of artificial intelligence that rebelled against them, in the form of robots, and humanity was forced to hide in high towers, hence the presence of trees at their top. But obviously, these trees are not a sufficient source of food (and living on top of a tower all the time, it must be annoying all the same), so our dear scientists are trying to find a solution. But hey, let's just say it, the semblance of narration is a bit superfluous, it's not necessarily what we are looking for in a game like that. 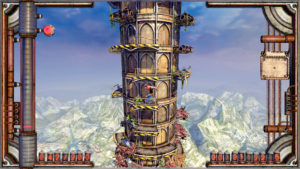 The operation is very simple, we direct the robot to the right or to the left (with the arrows on the keyboard or the joystick of the controller) and a button to jump from platform to platform. Some powers can also be unlocked, such as teleportation or double jump.

As the levels progress, the difficulty increases and enemies begin to appear (and therefore to be avoided). Taking the appearance of insects, we must initially avoid simple slugs, crawling on the platforms. Then they diversify, start to fly and avoiding them will require more and more reflexes and anticipation to go to the end.

Especially since these insect-robots will not be your only enemies. Time will also work against you. A gauge empties gradually, representing the energy of the ball. Once arrived at zero, the ball is out of order and the level lost. Fortunately, fruits are scattered throughout the levels, making it possible to recover this precious energy. But inevitably, that requires to anticipate even more its movements, according to the enemies and the platforms available. 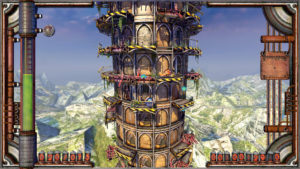 To vary a little from the simple story mode, with almost useless narration, the game offers two other modes: the infinite mode, where you climb an endless tower, which will delight fans of scoring. As well as a two-player mode, who must climb the tower before the other, with a whole bunch of possible settings. 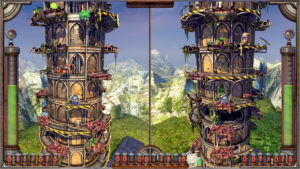 Before concluding, I just wanted to make a little point about the music, which is one of the strong points of the game. Heady, it reminds me a lot of certain RPG melodies from the 90s. The only downside is that I feel like I hear the same one all the time. A little variety with the same quality would have been appreciated.

In conclusion, Upwards, Lonely Robots is not fundamentally a bad game. I especially think that it is one of those games where you either love or dislike at all. Fans of scoring could find their account there, as well as occasional players wishing to spend a few minutes of relaxation. But there is little chance that he will revolutionize the genre.