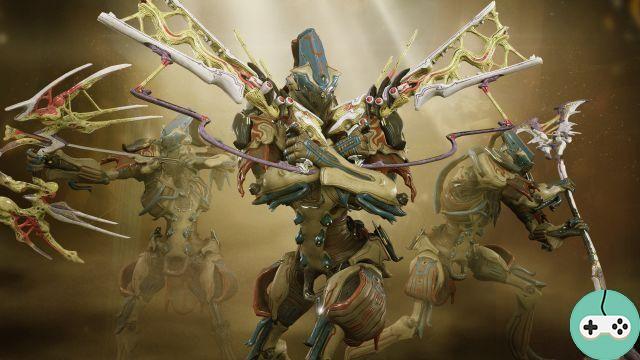 The years go by for Warframe which is already blowing its third candle. Since release in 2013, over 22 million players have completed 2.1 billion missions, created over 18.5 million Warframe in the Foundry, killed over 13.8 billion Grineer enemies, and gained over 53.9 trillion XP! 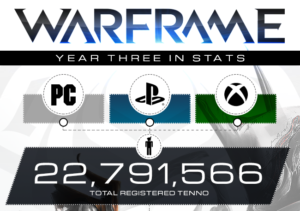 For the occasion, the Sands of Inaros update, already available on PC, is now available on consoles (Xbox One and PlayStation 4). And if you play Warframe between April 8 at 20 p.m. and April 15 at 20 p.m. still on consoles, you will automatically receive the Dex Sybaris, a Lotus-themed weapon, as well as the two weapons from previous birthdays (the Dex Furis and the Dex Dakra). PC gamers must have received these weapons in a previous update.

Here are the skills of Inaros: Absorb the life of your enemies and enjoy increased health with the new Lotus Warrior, Inaros. Use your skills to appropriate the lives of those who dare to challenge you, or subdue them by summoning the power of the sandstorms of Phobos.

MOON OROKIN - NEW GAME MODES: The Orokin Moon environment has been expanded to include new game modes. These additions include:

Stand out on the battlefield and join the dark side of style with the new Trinity Deluxe Skin Collection. This collection of skins features a new Deluxe skin for Trinity, the Bo Staff skin, as well as Trinity-inspired armor for your Kubrow.

FOCUS 1.1: Players will be able to recover "Convergence" loot in missions if they have the focus lens equipped.

CHANGE ON CHAT: The Sands of Inaros update also brings a complete overhaul of Warframe's user interface, including new features and more intuitive settings for private chats and player searches.