The Warhammer franchise welcomes a new offspring to the family: Vermintide. Based on the heroic-fantasy counterpart of the series (and not the futuristic Warhammer 40,000 series), Vermintide offers a four-player first-person co-op adventure.

The city of Ubersreik is invaded by Skaven, kind of belligerent ratmen and willing not to leave you alone. The aim of the game ? Simply survive through hordes of enraged Skaven. 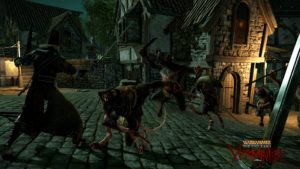 The main ambition of the game is to give pride of place to cooperation. The levels are crossed at four, only. Don't even hope to survive alone in the city anyway. Better to avoid playing it solo and wait for your little friends.

Five heroes are offered to you to go hunting Skaven. Five heroes for four players, which always leaves the choice to the youngest, it's pretty good. 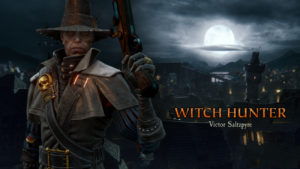 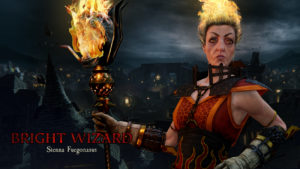 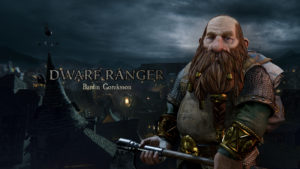 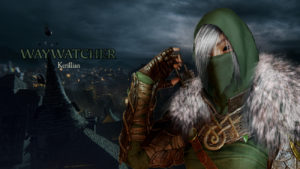 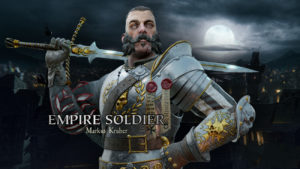 After choosing our hero, we meet at the hostel where it is possible to stock up on ammunition, and especially to prepare the next mission via the table in the center.

Four players are therefore necessary to launch the mission. It is thus possible to group together with friends, or to directly launch a group search and find temporary comrades. Or, if you want to play it solo yourself, it's still possible to team up with AI-controlled bots. 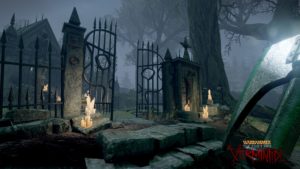 The first level starts, and we find ourselves in the city of Uberskreik. The few tutorial messages advise us to play it discreet and avoid making noise. Indeed, the Skaven have fine hearing, and making noise risks arousing hordes of humanoid rats.

My advice: do not rush, move slowly, and especially avoid separating. The game is really hard, very hard, because you quickly get overwhelmed by dozens and dozens of Skaven. Better to play it thin and eliminate the Skaven lying around at a distance. Certain fights will be inevitable, however, and it will be necessary to play the pruning in the bodies en masse to hope to survive. 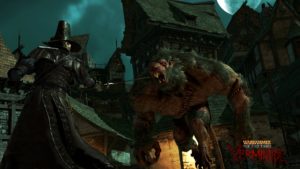 You shouldn't hesitate to dig into every nook and cranny either. Indeed, chests are scattered in certain places, which can contain potions, allowing you to recover health or increase your power.

Unfortunately, because of this difficulty and technical concerns (systematic crash at the end of the first level), it was not possible for us to see more, especially on the progression system, allowing to improve the hero and be able to carry other weapons. But that RPG feature is there anyway. 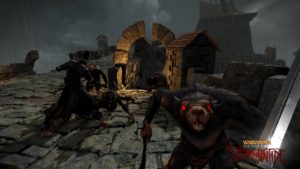 I love first person shooters, especially the ones that offer something original. Vermintide had this beautiful promise to offer a different, medieval-fantasy universe, which we hadn't had in a while in a FPS, and I was very excited about this idea. The five heroes are very different on paper, but ultimately, the gameplay remains more or less the same: we attack from a distance at first then we switch to the melee weapon.

A little repetitive all that, even if obviously different objectives punctuate the levels. I say "obviously", because as said above, several elements made that we could not pass the first level and it is a shame. Technical issues, but after all, it's a beta, so nothing to worry about. But above all the difficulty of the game. A difficulty poorly measured for me and where the player can do nothing, because it is based on the number of enemies impossible to manage. Hopefully the developers will correct this before the final release because the game still has qualities and it can offer interesting entertainment.

This new opus faithfully takes up the universe of Warhammer Classic. The races, especially those that we embody (dwarf, human, sorcerer, etc.) are well defined, whether graphically or at the level of the story. Regarding the enemies, I was only able to meet the Skaven who are always so annoying to come out of their hole or to land from behind.

Gameplay level, the game is quite difficult, whether in groups or with AI. It must be said, the AI ​​can sometimes do crazy actions like doing a big Leeroy Jeenkins on a boss. On the player side, it will be necessary to make weapon changes between the melee weapon and the ranged one. The Melee Weapon Block feature is essential for survival. On the offensive side, we can load our weapons to inflict more damage. For example, the witch can charge a fireball.

On the graphics side, the Warhammer touch is present. Even if the game is quite greedy in ultra, it remains fluid. Allied and enemy characters are also well represented. As for the general atmosphere of the city being explored, various events in history will cause it to change in nature (collapsed tower, collapsed bridge, etc.). If you have time to listen to the music of the game, it is also characteristic of the Warhammer universe but between the sounds of Skaven charging you and the sounds of weapons, you will not hear much, it must be said. .

The story is quite classic, we evolve in a city on 4 player instances in corridor mode. In each instance, we have an objective which will evolve in continuity with our progress in the level. At the moment there are 13 levels to go. I was able to do the first two in the beta (without finishing the second because of a crash on the end boss). Even if we are in "corridor mode" the game is really addicting. The difficulty is such that you have to be focused from start to finish. To finish a level, it is possible to play it trickster, it sometimes works but the times it fails, your group will be expensive (very expensive even). One thing to take into account, you must always stay together, special Skaven can appear and bring you to a corner. If you're familiar with Left 4 Dead, there are enemies a bit similar to the Tank, the Hunter, and the Smoker.

In short, this game is a good discovery on the Warhammer side. It is not yet at the level of what the franchise can be with opus like Dawn Of War but you will have a good time with friends to evolve in this city infected with Skaven. Last thing to know, the characters will evolve according to your progress. Unfortunately I could not see this content with the missions I was able to perform.


Do you want to be up to date and know all the tricks for your video games? In gamesmanagers.com we enjoy playing as much as you do and for that reason we offer you the best tricks, secrets or tips for you to play non-stop. We offer you quality content and always updated to keep you up to date. That's why, in our website, you will find not only videogame guides but also tricks, secrets and thousands of tips so you can play to the limit. Are you ready to get it? Enter now and enjoy your videogame!
GW2 - # S40 - WvW, PvP & Tournaments ❯