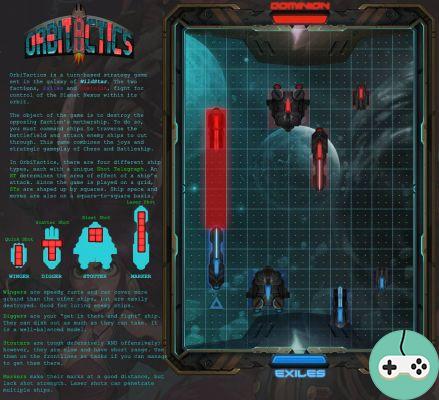 Last week, in partnership with Carbine, we launched a game where you had to invent a mini-game. We had great proposals, it was really difficult to choose, we would have liked to have dozens of T-shirts and posters to win, unfortunately we only have two ...

Unanimously, our first choice fell on the Guide proposal. Here is his proposal: 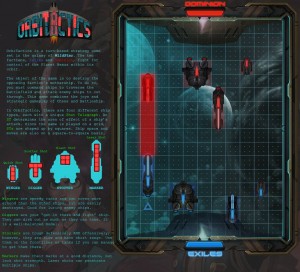 In addition to a very neat presentation, Guide offered us very comprehensive rules for a turn-based strategy game. The two factions, Exiles and Dominion, battle it out for control of the planet Nexus in orbit combat. The objective is to destroy the opposing faction's mothership by commanding its ships to cross the battlefield to attack enemy ships. This game combines the joys of naval battle and chess.

There are 4 different ships, each with a different firing zone (called ST = Shot Telegraph in English). The game takes place on a grid so the STs, as well as the ships and movements are represented by squares. Here are the different ships:

Several proposals were competing for second place and we finally agreed on this game where the author, Alexandre, imagines a mini-game that would be accessible via an arcade machine located in a capital with possibilities of rankings or even duels. It would be enough to transpose the mechanics of PvE and the atmosphere of WildStar in a Shoot'em Up. By taking a model from an R-Type or a Metal Slug (this remains to be determined), we could integrate the game's bestiary or adapt an instance / raid in a Shoot'em Up version. The possibilities are limitless.

Imagine being able to discover the techniques of the bosses of raids or dungeons aboard your small ship, all in a retro style (level 8 to 16-bit graphics). The author tries, at the risk of being scolded, a parallel with another game, World of Warcraft and his first raid, the Heart of the Magma. The first level of the game would be a light version transposed into Shoot'em Up taking up the theme of fire with the watches and the bosses of the raid. We can even imagine an application to try the game on his smartphone. This rather demanding mini-game could give, once the level is completed, a useful improvement in combat.

The choice was hard and we wanted to thank a few ideas that caught our attention ... we had to choose. In order, we also liked a lot:

We will be posting all these other ideas in the coming days and are preparing a document for Carbine to let them know about your ideas! Who knows, maybe they will be excited and we will slightly influence this great game that they are preparing for us.

Do you want to be up to date and know all the tricks for your video games? In gamesmanagers.com we enjoy playing as much as you do and for that reason we offer you the best tricks, secrets or tips for you to play non-stop. We offer you quality content and always updated to keep you up to date. That's why, in our website, you will find not only videogame guides but also tricks, secrets and thousands of tips so you can play to the limit. Are you ready to get it? Enter now and enjoy your videogame!
Rope Racers - Grab the Rope! ❯

Add a comment from Wildstar - Result of the mini-games