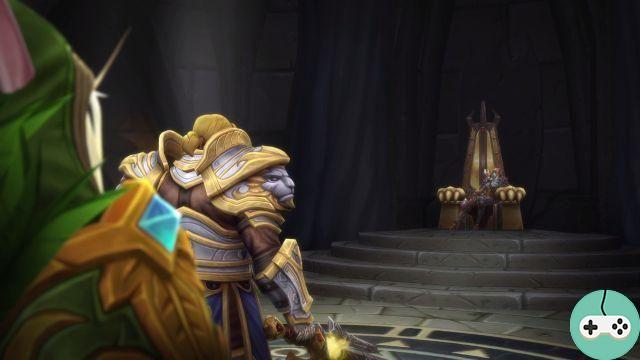 At the end of August, the new expansion for World of Warcraft was released. For the occasion, all our characters could go from level 110 to level 120, and enjoy a whole host of new content that I will try to detail below. A WoW player since the first hour, I never really stopped playing, although I had a few slack periods over the expansions. So it was with enthusiasm that I joined the war with my thief on the Alliance side. But it all actually started a few weeks before the expansion's release, with a storyline that took one to explore the premises of war, to confront Sylvanas on her throne, in the Undercity, in a scene that wasn't without recalling Arthas, before the queen of the Forsaken takes revenge by destroying the world tree. 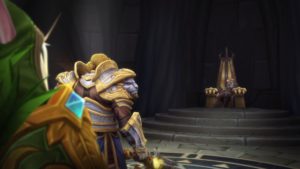 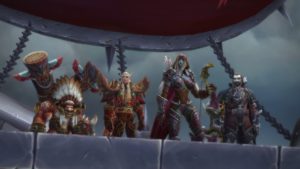 The Undercity attack scenario remains playable thanks to the expansion's introductory quest that launches from each capital. Once the instance is complete (doable solo), head to the new continent: Kul'Tiras for the Alliance, Zandalar for the Horde. These continents are very alive and much more varied than what we have seen recently during Legion and Warlords of Draenor expansions. 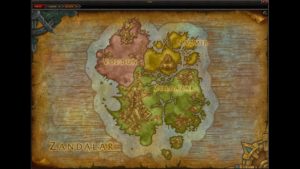 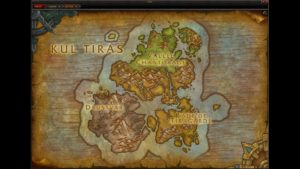 As you progress through the main quest, the war against the opposing faction becomes clearer, things escalate and it looks like nothing can fix the two camps in a more player-versus-player-oriented expansion than ever before. For the occasion, Blizzard has changed the way the PvP marker works in the open world: there are now no more PvP servers, it is up to each player to activate or not their personal marker. For the brave, there are additional bonuses, including more experience gained ... with the risk of having bad encounters because no area is safe.

Indeed, the quests take you through the three zones of its continent, but also those of the enemy continent to establish outposts. I didn't play on the Horde side, so I couldn't detail the story for you, but on the Alliance side, it mostly revolves around the character of Jaina Proudmoore, who is the youngest daughter of Grand Admiral Daelin Proudmoore, former ruler of this continent. . Since the events of Theramore, and the death of the Grand Admiral, everyone has held Jaina responsible and the family reunion will not go as smoothly as the Alliance had hoped. 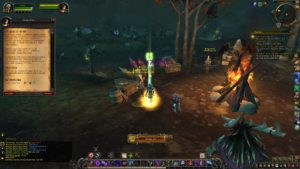 Once the maximum level is reached (allow about fifteen hours) and the main quest completed, the world quests are unlocked, on the same system as in Legion. Every day, at 9 a.m., morning and evening, quests are activated in the six zones, with different loot: war resources, Azerite, gold coins or equipment. In addition, these quests allow you to build your reputation with several factions with the key to equipment, mounts, mascots, plans for trades ... 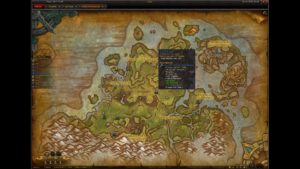 Heart of Azeroth and Traits

From the start of the expansion, it becomes clear that the planet has been hurt by the events that unfolded at the end of Legion, and we must do what we can to repair the damage. To do this, our character is given a very powerful artifact, a necklace called the Heart of Azeroth, which charges with Azerite. This intangible currency is earned during world quests, but also through various high-level activities. 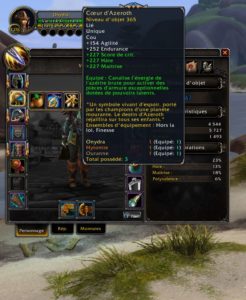 With the levels gained, the power of the collar increases and unlocks specific traits on three special pieces of armor (head, torso and shoulders). For example, I have a level 21 collar, but the piece of equipment 255 that I wear on my head requires me to have a level 22 collar for the third circle, then 25 for the center. So for the moment I only have two active lines, on the two outer circles. 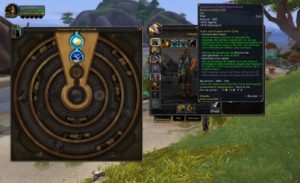 Reconfigurable at will for a few gold from the so charming (and traders) Ethereal, these pieces of armor offer a new way to customize your character and continue to advance him in the long run, although talents do not. evolve more since level 100. A feature that I personally appreciate, which has the advantage of not limiting the weapon carried as in Legion, but which also creates a new puzzle because the traits are not all equal, and some even drastically change the way of apprehending its cycle, capacities hitherto negligible becoming more than useful. Blizzard is actively working on trying to improve the balance of all traits, but it will undoubtedly be a long and tedious task.

In addition to hoping to find allies among the local populations, each camp calls on allied races. Three new races are added to character creation (or by a paid race change). On the Alliance side, we have the Draenei Sancteforge, the Dark Iron Dwarf, and the Void Elf. 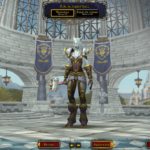 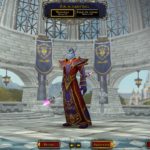 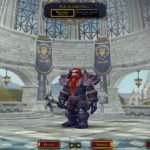 While on the Horde side we find the Nightborne, Highmountain Tauren, and the Mag'har Orc. 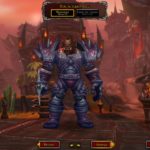 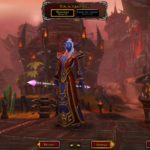 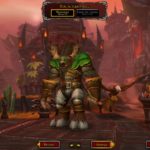 These races are unlocked through in-game achievements, followed by a series of quests. The new character is directly level 20, with new racial bonuses that you can find on the official site.

Each faction has access to four normal dungeons during the leveling up, then the eight dungeons become accessible to all in their heroic version, once level 120 has been reached (and minimum equipment obtained). In addition, two other dungeons accessible only in Mythic are unlocked for the best players after a series of quests. There are therefore ten dungeons available at level 120 in Mythic. 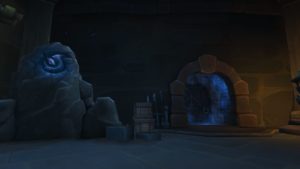 The mythical system is copied from that of Legion, with the same principle of keys that increase the difficulty of the instance and add different random effects from one week to the next (more enemies, more damage, more hit points, explosive effects on death ...). A successful instance within the allotted time sees the level of the key used increase for another random instance, otherwise the key is downgraded to the lower level (at least +2). Loot scales with difficulty as well, with a random piece of gear at the end of each week based on the highest difficulty achieved during the week.

As in PvP, a season system is in place to offer loot that will follow the progression of raids. 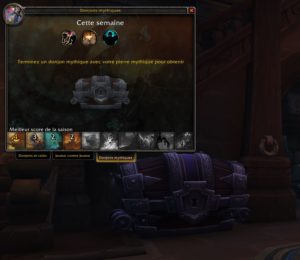 Raids, let's talk about it. There is currently only one raid of eight bosses, Uldir, which takes you to a former Titans research center. The bosses are very varied even if some are reminiscent of other instances such as Ulduar in particular, with their lots of innovative mechanisms. Mobility and responsiveness are the keys to success, almost all fights require attention to harmful spells which, if not far from others, result in the death of the entire group. Long live the wipe!

Thanks to the new guild that Clamoune and I joined on Dalaran, we went to the penultimate boss (Mythrax) after two weeks in normal, a more than honorable advance while we were no longer looking for progression since long time. 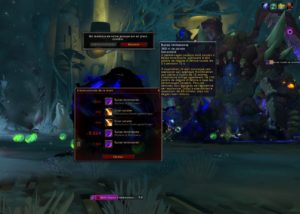 Another style of three-player instances, the islands take you to areas where both factions try to harvest as much Azerite as possible within the time limit. There are currently three islands, in four different difficulties: Normal, Heroic, Mythic, and Player vs. Player. 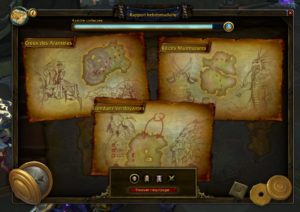 As well as being able to obtain pets, mounts, or parts for transmog, islands are a good source of Azerite for the necklace. 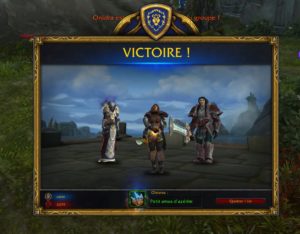 Very intense, the islands are quickly made contents, but which do not bring a real interest as the interesting loots are rare.

The Alliance and the Horde clash in an endless war where each side, one after the other, amasses resources, gains access to a boss, then again loses control of the area to the benefit of the other faction, which in turn will have to amass resources.

At the time of writing this article, we were in the fundraising phase: the resources to bring back were extremely expensive, which resulted in a rather long phase where the personal interest in giving was not very clear. Subsequently, the front was unlocked, a 20 v 20 instance where it is not possible to go in guild because only groups of 5 players maximum are allowed. Once there, different points to capture against Horde NPCs (a bit like a battlefield), resources to collect (wood and iron), some quests to complete to get bonuses and finally a boss to kill with, at the end of the day, a piece of equipment 370. I admit not having been very convinced by this first experience, the fight is rather long and messy, the players are scattered on the map and the lack of healer made the overall experience a little fun. 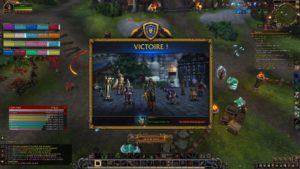 We had the fiefdom, then the class domain, now we go to the boat. 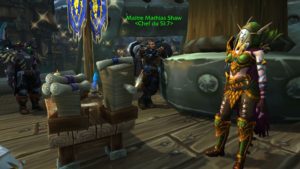 Here, there is no instance or place dedicated to a character, but an open area, in the middle of the capital, where we find the mission table. Exactly as for the two previous expansions, for war resources, subjects go on a mission with different rewards such as gold, reputation or Azerite. As the expansion is not very focused on this feature, missions become a quick secondary way to get some rewards, without being very useful (especially in the long term, once reputations have been built). 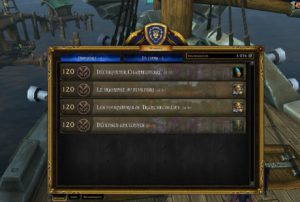 PvE player in front of the Eternal, I haven't been in PvP yet, and I don't know enough about it anyway to rule on this side, so I will refrain from any comments. For the part that I know better, Battle for Azeroth has been able to take the best Legion systems by improving them, and in particular for the mythical dungeons which have become a real means of obtaining viable equipment, in the same way as raids , without the constraint of large groups. The rhythm is very intense at the beginning of this expansion, hardly the normal and heroic modes opened, that the mythic mode arrived. Guilds are already well advanced (7 out of 8 bosses have fallen into mythic at the time of writing this article), but the different modes allow most players who give themselves the means to also access this content, if only with the group search tool (LFR) which already offers the first wing (and the first 3 bosses).

The big question now is about long-term sustainability. At my level, I undoubtedly have several weeks, even months, before I manage to overcome the raid in normal, even heroic, as well as aim for bigger keys in Mythic. But won't the rapid pace of this early expansion lead to an even longer "dead" period at the end? It is still too early to know, but this beginning of BfA is in any case explosive, so much so that it made me want to play again, and it was since WotK that I had not been so motivated! 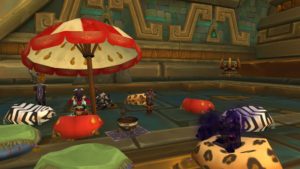 Do you want to be up to date and know all the tricks for your video games? In gamesmanagers.com we enjoy playing as much as you do and for that reason we offer you the best tricks, secrets or tips for you to play non-stop. We offer you quality content and always updated to keep you up to date. That's why, in our website, you will find not only videogame guides but also tricks, secrets and thousands of tips so you can play to the limit. Are you ready to get it? Enter now and enjoy your videogame!
Earth Liberation - Play strategic to liberate the earth ❯

WildStar - Destruction of the Mechanic

Add a comment from World of Warcraft – Battle for Azeroth