A new version of 6.1 has been deployed on the test server! Let's take a look at what's new in this patch, along with some screenshots from the PTS.

As promised, there is now the option to land at the next flight master.

There are also some new mascots: Young Talbuk, Slithershock Elver and Bone Serpent.

Queues are going to be improved for Ashran!

@JoeyGiggles_FTW In 6.1, we’re revamping the queuing system for Ashran to regional, similar to battlegrounds.

An NPC sells "rush orders" as well as items to change the traits and profiles of subjects. Finally, there is something to unlock the "Scout" missions which allow you to obtain apexis crystals (800) against fief resources (200). 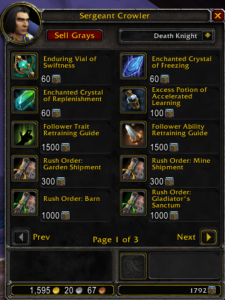 All other items can be upgraded a fourth time, increasing armor to 680 and weapons to 670. This requires 30x Savage Blood, 40 Primals and 200x Profession Item.

Here are for the main additions. Everything else is visible on my two sources:

Add a comment from WoW - 6.1: information extracted from client # 2