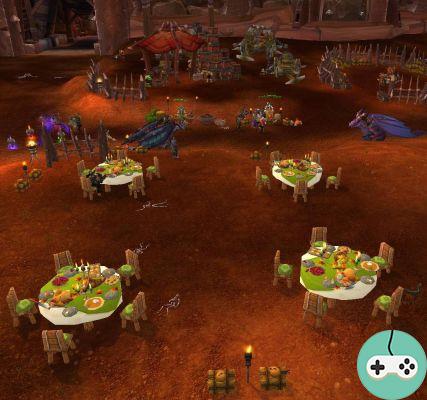 The worldwide event, The Benefits of the Pilgrim, returns from November 24 to December 1 in all Alliance and Horde capitals as well as in smaller towns:

You will have various quests and achievements to do on this occasion. 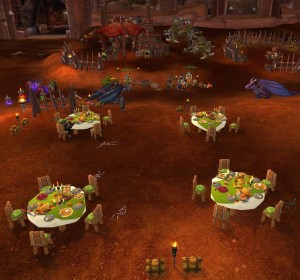 This event is linked to cooking, so it's the best time to improve your skills thanks to the recipes offered (even if things are much simpler now thanks to the Plowmen). 5 recipes can be purchased during this week from the vendors of the event for 1pa: the cookbook of Bounties (horde / alliance). This container contains 5 recipes needed to do the quests afterwards:

To complete all the quests, therefore plan a minimum of 280 in the kitchen to learn the ultimate recipe. The first recipe requires knowing how to cook spiced bread, the recipe is taught by any master cook (we find some in the biggest camps), from the start of the profession of cook (1). 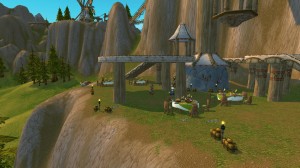 A quest is offered by a commoner, in the capitals, which leads to the main event camp, either Undercity and Stormwind. This quest begins a sequel, related to the kitchen profession, which will take you for a walk:

Before leaving a city, systematically buy the resources necessary for the preparation of the following recipe, from the seller of the benefits of the pilgrim otherwise you will be good for a free round trip. Note that when you go through the forest of Elwynn / the clearings of Tirisfal, you have to kill turkeys, to get 5 (necessary for the last part, roast turkey).

At the end of this ballad, you get a turkey call that allows you to summon a lone turkey! 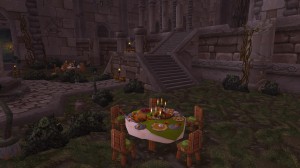 There are 5 daily quests, the equivalent of the classic quests mentioned above, just as the quantities are increased (20 for each dish). Feed your mount well, it will have to gallop:

As before, you need components (20) from another city. I therefore advise you to start from Undercity / Hurlevent (with pumpkins and turkeys) then go to Pitons-du-Tonnerre / Darnassus. You can return the pumpkin quest there and buy the potatoes. Then go to Orgrimmar / Ironforge where you can return the turkey quest and do the spicy bread quest (requiring no components). Before leaving, buy the cranberries and then return to Undercity / Stormwind, you normally have the potatoes and cranberries to finish! You can of course stock up and avoid the final trip.

As a reward for these quests, you will obtain a bag, The Benefits of the Pilgrim, which can contain various items, some of which are necessary for the achievements:

You will have to do the daily quests 12 times in order to obtain a chest piece, the hat and the 10 turkeys. 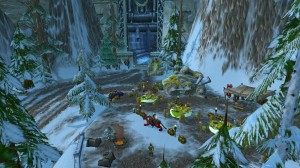 There are 9 achievements linked to this world event which allow you to obtain a beautiful mascot, a plump turkey and a title, the pilgrim / pilgrim: 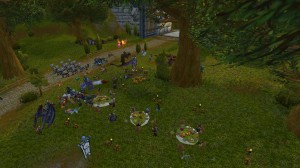 Have fun and don't overdo the turkey!

Roots of Insanity - A small step towards madness ...