Much like Shadowmourne, Dragon's Wrath, Tarecgosa's Rest is a weapon that you will see gain in power as you complete quests.

In order to acquire the first quest, you will kill a Lava Lord in the Firelands, this is an NPC present throughout the raid and in all difficulty settings. You will then need to go to Stormwind / Orgrimmar in order to speak to Coridormi / Ziradormi in order to return a quest called Your Time Has Come.

This is the first quest given to you once after talking to Coridormi / Ziradormi. She asks you to go to the Caverns of Time in Tanaris and speak to Anachronos.

Anachronos provides you with your second quest, she just asks you to talk to her again. A cutscene will then start.

Here is the third quest, still from Anachronos. It is from this moment that the continuation of the quest becomes more full-bodied. Indeed, you will have to recover several components:

Embers can be obtained from all bosses in the Firelands raid and are present in all difficulty settings. However, it appears that embers have a higher chance of dropping in 25 mode, around 55%.

The Sands of Time can be purchased from Yasmin in Uldum for the modest sum of 3.000 gp / unit.

This quest asks you to speak to Tarecgosa in the Borean Tundra in Frimarra. A cutscene will be triggered.

The fifth quest asks you to go to the Nexus to fight alongside Tarecgosa the various Draconian minions of Deathwing. Tarecgosa will give you all the information you need to complete this project when you are inside. Once finished, it will ask you to click on a vortex in order to have a vision of the Blue Flight.

You must speak to Tarecgosa to tell him about the vision you just had. She seems skeptical ... But, as a precaution, she asks you to go see Kalecgos in Nordrassil in Mont-Hyjal to find out more.

You tell Kalecgos about your vision. He is careful and asks you for a mission: recover the Branch of Nordrassil in the Firelands. In order to create this branch, you need to acquire 4 elements in several different ways:

During the battle between Beth'tilac, you will need to find Obsidian-speckled Chitin Fragments. To find them, you must kill the Braisstar Workers. These leave behind Obsidian-speckled Chitins that contain the Fragments you are looking for. Collect 3 to create the Discharged Chitinous Focus that must be used upstairs on the web when Beth'tilac casts her Burning Devastation spell to charge it. Then retrieve the charged Chitinous Focus.

During the fight between you and Shannox, you will need to collect 3x Gravelstone Fragments. These shards can be found in Gravel Shards after a Crystal Prison Trap has been destroyed. Then create the Discharged Pyrocoque Focus that will need to be charged. To do this, use it just before Shannox casts the Throw Spear spell. If you are alone, the spear will be thrown at you, place your focus well because it will have to be hit by the spear! Once done, it will be charged and you will be able to recover the Charged Gravel Focus.

During the fight between you and Alysrazor, you will need to find 3x Pyrocoque Fragments. They can be collected from Pyrococcus Fragments that appear after a Ravenous Baby egg hatches. You will then be able to create the Discharged Pyrocoque Focuser which will need to be charged. To do so, it must be used just before she reaches Full Power, ie when her energy bar reaches 100. Place your focus shortly before her energy bar is full and wait his fate. It will no longer be enough to recover the Charged Pyrocoque Focuser.

Once these 4 elements are at your disposal, go to the portal near the area where Beth'tilac is located (Exact location), then use all your focusers to deactivate the fire portal there. Once through the portal, a fight against Volcanus takes place. At level 100, it is not very difficult to kill him. Once Volcanus is defeated, search it and collect the Branch of Nordrassil.

Kalecgos asks you to follow him further into the Borean Tundra. On your arrival, an event will start.

Kalecgos asks you to bond with Tarecgosa by agreeing to carry the essence of a dragon.

Kalecgos once again asks you to return to the Firelands in order to find 1000x Boiling Embers. Embers fall on all bosses and in all difficulties. However, the number of embers is considerably higher in Heroic 25 difficulty, up to over 60 embers per boss!

Once the 1000 embers have been obtained, return to Kalecgos.

You will need to attend an event. At its end, return to Kalecgos to return your quest, he will in return give you the Runed Staff of Nordrassil, your second reward.

Your penultimate quest requires you to retrieve the Heart of Flame from Ragnaros along with 250x Smoldering Essences. These essences can be obtained from all bosses in Firelands and in all modes. Again, the essences are 10 per boss in heroic 25 mode unlike other modes which give much less.

Once you have acquired the components, go see Hallegosa in the Borean Tundra.

You have arrived at the end! Talk to Hallegosa, she gives you the quest The Cloth of Legends which asks you to attend the wrath of the dragon ceremony. At the end of this ceremony, you will obtain the staff: Wrath of the dragon, the Rest of Tarecgosa!

Small peculiarity, the event is located in the middle of your capital, Stormwind or Orgrimmar in front of all the players. Tarecgosa will fly over the capital and all the other players will be able to come and witness your new acquisition!

I leave you with a screenshot of the final event: 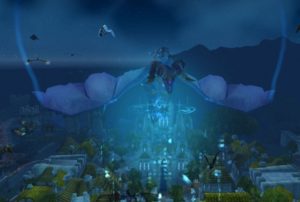 
Do you want to be up to date and know all the tricks for your video games? In gamesmanagers.com we enjoy playing as much as you do and for that reason we offer you the best tricks, secrets or tips for you to play non-stop. We offer you quality content and always updated to keep you up to date. That's why, in our website, you will find not only videogame guides but also tricks, secrets and thousands of tips so you can play to the limit. Are you ready to get it? Enter now and enjoy your videogame!
GW2 - Bilan de la Convention de Salma ❯