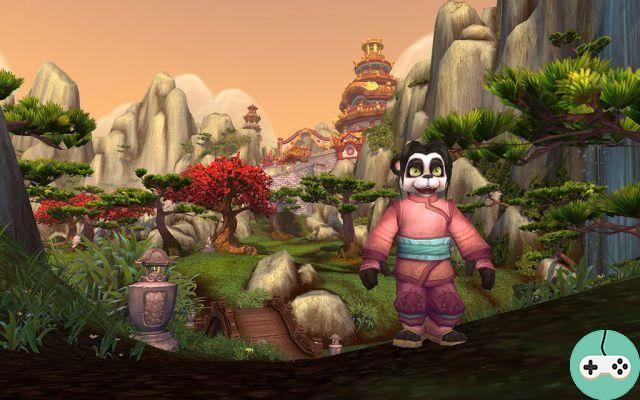 “My name is Li Li Storm Brown, pandaren born on Wandering Island or Shen Zin Su. I decided to explore the place where I live like an explorer, a philosophy described by Uncle Chen in many of his letters. In fact, it means taking each journey one step at a time, observing everything around you, talking to everyone you meet and absorbing everything down to the smallest detail ”. So begins Li Li's diary. 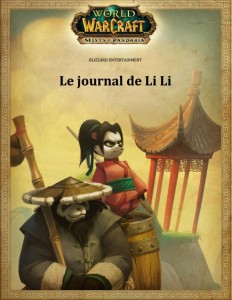 Li li wants to do like Uncle Chen: explore. She therefore crosses the Arch of the Daybreak, not without nostalgia while listening to the story of the first pandaren explorer Liu Lang in the classroom below the bridge! Arrived at the Temple of the Five Mornings, the water spirit, Shu, shows him the way to meet Liu.

Crossing the valley of the dawn planted with puzhu trees, she arrives at the village of Wu-Song, but loses the puddle that served as a guide. Despite her meeting with Aysa Poet of the Clouds, mistress of the Tushui school of thought (defending what is right), and Ji Fire Paw, a master of the Huojin way (direct action), she does not manage to find the trace of the puddle. A little distraught, she follows the carter Lun whose hozen thieves have plundered the reserves.

At the Dai-Lo farm, we can clearly see the traces of the hozen which run through the forest north of the Spans, towards an area called the Singing basins (magic water); Li li is ready to do battle, but the hozen having stolen to feed their babies, she just throws them a pumpkin! And leaves for the forest of Pei-Wu guarded by two doors which she climbs at night. A noise ! Is it a tiger? No, it was the villager Bo Le who followed her and brought her back to her unhappy father. She leaves immediately, this time in the forest of a thousand sticks where Shaopai, a pandaren of great wisdom, offers her the worry stone. 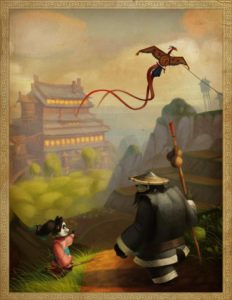 Uncle Chen has returned to the Wandering Island and sets out with Li Li in search of the land of their supposedly extinct ancestors, Pandaria. Thanks to the pearl of Pandaria, they land in the Jade Forest where they fight against the lizardmen, the sauroks. The victory allows them to recover the jade blocks stolen by the Sauroks: the Pandarians hail them as heroes because, without jade, they could no longer sculpt the statue called the Heart of the Serpent and Yu'lon, one of the four celestial beings. who watch over Pandaria, could no longer transfer his life essence into the statue. Harmony regained, Li li and Uncle Chen then meet the Order of the Cloud Serpent community whose members breed cloud serpents. Li li grants herself a small flight on the back of one of these cloud snakes thanks to Zhu of the Rain to whom she offers the pearl of Pandaria.

And then, with other travelers, it's the exploration of the Jade Forest. There, they learn of the existence of a Brune d'Orage brewery run by Uncle Gao. And even if this brewery is in a bad state, we rebuild the building while telling family stories. Brutal interruption because mantids, very nasty insects, attack the village of Chasse Pierre. They emerge victorious, but still hovers the fear of Sha, indefinable evil spirits ... Taking advantage of Uncle Chen's enjoyment of Uncle Gao's beer, Li li rushes towards the wilds of Krasarang. It was there that Liu Lang first left Pandaria on the back of Shen Zin Su, the turtle who, as he grew up, eventually became the Wandering Island.

She crosses paths with a fisherman Ryshan who is very afraid of a raccoon! Reminding her of her brother Shisai, she tames the animal and adopts it! In the evening, when the fish are grilling, these devils of Sha are mentioned again. In the morning, an airship driven by Shin Cloud Whisper lands to load fish which he must then deliver to the Temple of the White Tiger in the Kun-Lai Mountains. Li li leaves with him. 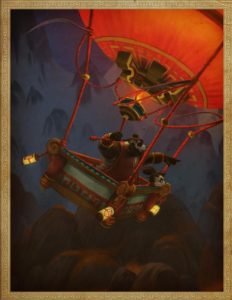 They arrive at the temple, frozen. Shisai, the raccoon, has incomprehensible outbursts of anger. To cure him, Li li and Shin decide to go see Yon; this pandaren advises them to teach Shisai to fight against other animals to channel his anger. Shisai calmed down, they balloon back up. The Gate of the Venerable Stars being inexplicably open, Li li decides to borrow it to discover the Vale of Eternal Spring.

Le Val is a paradisiacal region, once populated by the Mogu. She travels with two refugees, Buwei and Petit Fu, who are fleeing the Kun Lai devastated by the yaungols, nomads themselves driven from their lands by the mantids. Arrived at the village of Brown Tomb, she leaves her friends, also leaving Shisai to Petit Fu and leaves to explore the rest of the vale. The grumpy, Fishtail Messenger, catches up with her and gives her a message from Uncle Chen. The latter, who has found other Storm Brown at the Chai du couchant, a camp in the lands of Anguish, asks him to find him in a tower of the guards, along the Spine of the Serpent. She leaves there, escorted by Messenger Fishtail.

Min awaits him, a member of the Shado-Pan, an order that watches over Pandaria from the Serpent's Spine. On the other hand, Uncle Chen is not here. And the mantids attack. Min fights them fiercely as Li li ties a rope around his waist and walks down the wall. The reception is a bit brutal! However, Li li decides to find her uncle and the Chai du Couchant on her own. 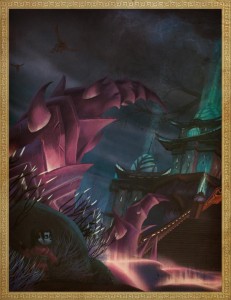 Despite her very great fear, she arrives at the Chai where she finds Uncle Chen, who, warned by Min, was preparing his rescue with three Stormy Browns: Han, Mama and Big Dan. It is the joy of reunion, just clouded by the memory of the missing. For them, for Buwei, for Petit Lu, Li li refuses to return to his village and intends to stay in the lands of Anguish to help free Pandaria from the harmful influence of the sha.


Do you want to be up to date and know all the tricks for your video games? In gamesmanagers.com we enjoy playing as much as you do and for that reason we offer you the best tricks, secrets or tips for you to play non-stop. We offer you quality content and always updated to keep you up to date. That's why, in our website, you will find not only videogame guides but also tricks, secrets and thousands of tips so you can play to the limit. Are you ready to get it? Enter now and enjoy your videogame!
ESO - What to expect - October 16 ❯

WoW - Blizzard returns to the price of sesame