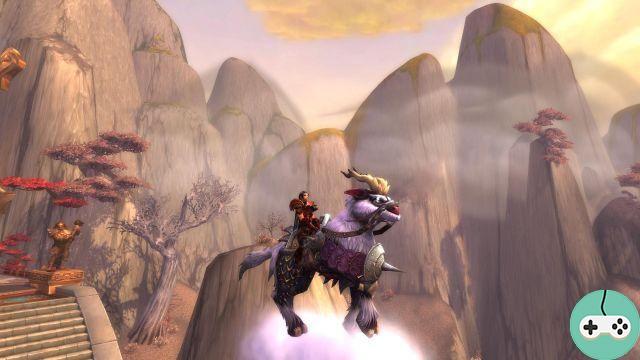 A currently very controversial discussion on the forums concerns the flying mount and its use in Warlords of Draenor. Prepare to bring out the old land mounts, as the developers have a good chance of not allowing flying mounts before patch 6.1.

Bashiok explained this decision on the forum:

There's a lot of discussion about flying/not-flying and I'd like to try to sum things up and maybe realign the discussion a bit. Some of the other threads are near-cap, some have really gone down tangents, so I'm just picking this one to throw a reply into. Apologies to the other threads.

We intend to disallow flying while leveling from 90 to 100, and have flying become available again in the first major patch for Warlords of Draenor.

No flying while leveling has been the case during Burning Crusade, Wrath of the Lich King, and Mists of Pandaria. We allowed flying during Cataclysm because as those zones were mixed-in with the 1-60 world it just would have been really jarring to dismount you as you fly into Hyjal, etc. but we would have disallowed it for Catalcysm zones as well if there was a reasonable solution there.

Flying trivializes combat. A lot of people like to say we're trying to force world PvP, or that we just really want people to look at the pretty trees we made, but those really aren't the reasons that drive this same decision we've made every expansion. Flying allows you to escape or enter combat at-will. There's a reason why flying isn't allowed in dungeons and raids, or battlegrounds and arenas, and that's because it would trivialize the core mechanic of the game in those areas - combat. For much the same reason it trivializes how content is approached in the outdoor world based on the simple fact that you can lift off and set down wherever you like.

So that's the main reason. But sure there are a lot of other problems it can cause for content design such as zones having to get a lot bigger because flying mounts can travel so quickly (and thus making ground travel in them take much longer), it reduces the impact of elevation within zones, it completely removes the ability for us to pace or present content in any structured way, and in general removes our ability to determine how and when players approach a situation, see a vista or location, or charge into/out-of a combat situation. It just greatly reduces any gameplay we want to create by allowing infinite choice in how content is approached to best suit a player's intention to (usually) avoid that content.

I totally sympathize with people's desire to do that, they want to be efficient and have it be their choice, but we have to balance our intent to create a game against creating a sandbox where anything goes. There's a happy medium there somewhere, but flying mounts in most cases just do too much to undermine too many of our core intentions with the game world, the basis of the game: combat, or guiding players through a game experience, and for those reasons we have continually chosen (when we could) to disallow flying mounts in the 'current' outdoor content. In the past that's meant only while leveling, but in our experiences with the Isle of Thunder and Timeless Isle we feel like we can extend that for a bit longer in the new content, and have it be kind of a big deal again once you're able to earn flying in the first big content patch, and in the meantime putting focus on flight paths as well as having some more interesting travel options for players to use.

In Warlords, they will try to modify the experience of the quests, drawing inspiration from what they did in 5.1 (Operation Shield) mixed with the teachings of Timeless Isle. The arrival at high level will be more natural, with a better transition. Indeed, until now, we follow a story and as soon as we reach the maximum level, we chain repeatable quests. They don't want that anymore and the high-level experience will be more like what you get when leveling up.

Finally, they want to make the theft unlock epic, a reward and not a given for a few gold coins. We can accomplish the first steps to obtain the mount once level 100 but the final steps will be added to patch 6.1.

So a couple things I wanted to bring up in addition to what I posted earlier. The first was that we're of course refining our questing experience, you may have heard a bit about it from BlizzCon, and that expands to max level content as well. In Mists of Pandaria there was quite a bit of outdoor content at max level, but it was almost entirely in the form of dailies. From BlizzCon we shared we're looking to provide something quite a bit more story driven like the 5.1 Operation Shieldwall/Dominance Offensive with some of the exploration lessons we learned from the Timeless Isle, and that extends to the max level experience as well. We want the transition at max level not to be questing and story to a harsh "now you do dailies", but something that's more natural and feels a lot like the leveling experience just at max level for better reward. And so that goes back to all of the reasons I gave before about how flight interrupts some of the core mechanics we think present the best leveling and questing experience, and I thought it'd be good to point out that it'll also play a big role at max level due to our questing refinements.

The second thing is we really like when flying feels like a reward and something you've earned for each new expansion or area. It's such a powerful ability and we look back at BC (at least for epic riding) or Wrath and those were really big keystone achievements for us as players (mainly because they had some pretty huge gold costs on them...). Regardless of the unlock method though it was one of the bigger moments when you unlocked flying, took to the skies, and were able to see the world from an entirely different vantage because for most of us it wasn't easily attainable. Our plan has been to recapture some of that but make it a bit cooler, and while we don't have specifics just yet, it'll be something more involved than just paying gold; something that further emphasizes how powerful flight is. Unlocking it won't just be level 100 on the day 6.1 comes out with some gold, but something you'll be working toward over the course of the initial expansion release, and 6.1 will introduce the final steps to complete it. Think of something like a mini Legendary cloak quest. It's such a enormous power to be able to fly we really want it to be more of a key moment when you unlock it, and something that feels like an accomplishment more than just shelling out some gold like we've had in the past.

Anyway, I felt like those two things were worth spelling out.

So that's what we know for the moment on the subject. Everything can be changed by the time the expansion is released but they seem to be pretty sure of themselves.

Add a comment from WoW - No flying mounts before 6.1