With the new expansion, ten new reputations have arrived, all with their stewards and their bundle of rewards. AtlasLoot is very useful to take stock of which faction has which piece of equipment necessary for your optimization but it is not always easy to find your way there even if in each sanctuary, of each faction, emissaries indicate how to help as well as the location of the steward of each reputation.

Here are the different factions, for each I indicate the location of the steward, the presence (or not) of repeatable quests and a brief description of the items offered.

Note that for 2 days, as announced on the forum here, reputation prerequisites have been removed on certain blue 358 quality items in order to facilitate access to heroic dungeons with the group search tool.

This mysterious Pandaren society seeks to solve the mogu problem once and for all.

Jaluu the Generous, the steward of the Golden Lotus, can be found at Mogu'Shan Palace, on the rotunda in the middle of the small lake, in front of the Vale of Eternal Spring. 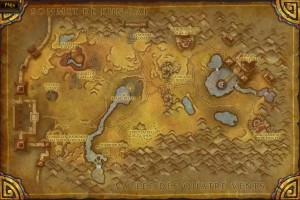 Repeatable quests can be found just west of the Quartermaster and start at the Golden Pagoda. Once these first quests are finished, a quest will take you to a second destination among 5 (Lac Blanc-Pétale, ruins of Guo-Lai, the Golden Staircase ...). As you progress through this reputation, you unlock quests and other reputations:

He sells several items per class, of blue quality (level 458), for justice points, not requiring a reputation level:

The dressmakers will also find their happiness with these 6 bosses (honored):

In addition, the ultimate exalted quest (The Ultimate Power) grants a 489 neck after an epic boss fight that might give you a hard time!

These ancient mantids were spared the corruption and madness that swept away the rest of the mantid swarm. They attempt to work together with the races of Pandaria to restore their queen to her former glory.

Amber Blacksmith Zikk, the Quartermaster of the Klaxxi can be found in Klaxxi'vess, in the midst of the Dread Lands. 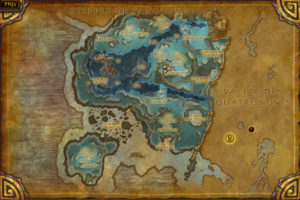 Repeatable quests can be found all around him. There are also 3 other quests depending on the quest location:

He sells 1 item per class, of blue quality (level 458), for justice points, not requiring a reputation level:

The  blacksmiths will find 11 bosses (honored):

Additionally, the ultimate Exalted Quest (Shadow of the Empire) grants a ring 489.

Stewards always sell small items, unnecessary but essential. For the Klaxxi, it is revitalizing amber, allowing to save his life in the event of a hard blow.

In addition, by talking to some Klaxxi, you will be able to get buffs, which only work in the region:

Order of the Cloud Serpent

Guardians of the Eastern Temple

San Ruby Scales, the Quartermaster of the Order of the Cloud Serpent can be found far east at the Arboretum in the Jade Forest. 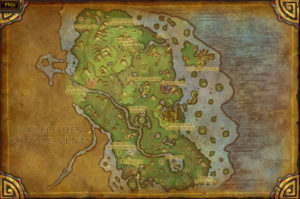 There are many repeatable quests that are taken directly around the Quartermaster, allowing you to grow within the faction. These quests revolve around a serpent's egg, which hatches, grows, matures into a large jade cloud serpent. A race course allows you to ride your snake companion and fly through the clouds in the sky race:

The rules of the race by the instructor Lame du Vent

Your cloud serpent is approaching, Onidra. When you're ready, step on it and we'll get started. The students of our order put their speed to the test in an aerial competition known as the Sky Race. I will teach you the rules of this race. Follow me ! As the exercise progresses, I will go faster and faster. Try to follow.

Do you see the pennants hanging right above our heads? These flags mark the speed race. If you ever get lost, they will serve as your guide.

Scattered among the arrows are ten hot air balloons or checkpoints. We are just in the process of passing one. In the real race, you will have to pass through each of the racing flags to validate the checkpoint. You have to go through all 10 checkpoints before you can complete the race. The flags indicate the route of the circuit, but finding another route will not be penalized. You might find other faster paths.

I showed you part of the circuit. Now let's go see the finish line. Follow me ! Remember that in a real race you will be against the other recruits in the order. The stakes will be high. The faster you are, the greater the reward.

This is the finish line. When you have passed the 10 checkpoints, go below to validate your ranking.

And that's all for our lesson.

The jewelers will find 5 drawings:

These brave Pandaren protect the temples of Pandaria from the evil shas. 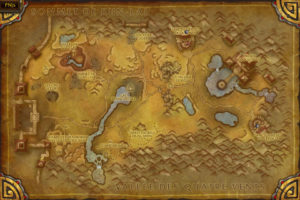 Repeatable quests can only be accessed once revered at the Golden Lotus and take place in 4 temples in 4 regions: at the Temple of the Jade Serpent to the east in the Jade Forest, at the Temple of the Red Crane to the south in the wilderness at the White Tiger Temple to the north at the top of Kun-Lai and at the Niuzao Temple to the west in the Tanglong Steppes. They sell several items per class, of blue quality (level 458), for justice points, not requiring a reputation level:

Other items can be purchased for Valor and are Epic Quality (489): Honored Bracers (1250) and Revered Boots (1750) and Hands (1250). Exalted, in addition to the tabard, he offers 1 mount: Thundering Venerable Cloud Serpent Reins (1k gp).

The  enchanting will find 3 formulas (revered):

The couturiers will find a patron (exalted):

Stewards always sell small items, unnecessary but essential. For the wise men of the Venerable Stars, it is a celestial offering, asking to be honored and offering an improvement depending on where we are:

Enigmatic protectors of the temples of Pandaria, the Pandashan are shrouded in mystery. 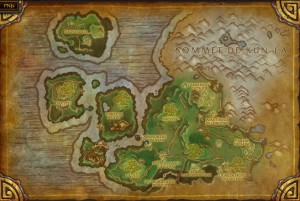 Repeatable quests can only be accessed once revered at the Golden Lotus. Rushi sells several items per class, of blue quality (level 458), for justice points, not requiring a reputation level:

The  enchanting will find 3 formulas (revered):

Stewards always sell small items, unnecessary but essential. For the Shado-Pan, these are 3 items to train in the monk's combat methods:

In addition, once exalted, there are 4 helmets (cloth, leather, mesh, plate), without stat, used for transmogrification.

Irion the Black Prince is the last of the Black Dragons. He is said to richly rewards those who earn his trust and support his efforts.

This faction is a bit special in that there is no steward or repeatable quest but a quest line offering (for the moment) a gem of legendary quality.

It all begins with the quest in a foreign land that brings together Wrathion, the black prince at the Tavern in the Mists, in the Veiled Staircase, a tiny region wedged between the Vale of Eternal Spring and the Jade Forest. 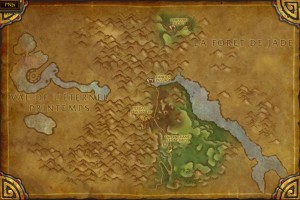 Once the introductions with the prince are made, two legendary quests are available:

These quests completed, the sequel asks to go and kill the sha of fear, in the Spring Terrace raid (fear incarnate) before finally obtaining the famous gems (the breath of the black prince). Might as well get started now because there is no doubt that these quests will have a sequel!

In order to gain reputation with the prince outside of raids, you have to kill level 90 mantids and Mogu. You will certainly come across them while doing your other daily quests. However, to speed things up, know that a tip is given on Wowhead: there is an island called Dao Shan'Ze, east of the Townlong Steppes, where there are particularly profitable Shan'ze illusionists (1.96M). and doable alone: ​​this nice villain makes 4 illusions appear, each giving 10 or 11 reputation points, himself giving 31 or 32 points ... A quick addition: 74 per illusionist, it's a gift. 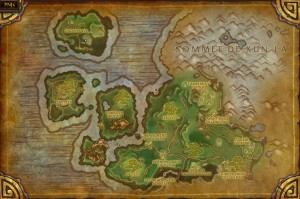 Anglers are a group of Pandaren fishermen who wish to feed their people and increase their fishing knowledge.

Nat Pagle, the Phishers' Quartermaster, can be found southeast of the Krasarang Wilds, at the Phishing Wharf. 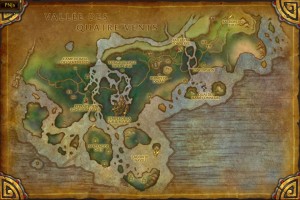 At the same time, Nat has his own reputation (in the manner of the Ploughmen) which is raised by offering him special fish for 500 reputation points:

These are green fish that, once caught, give Nat a quest: 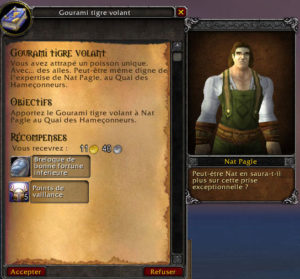 Revered, he sells his Nat's Fishing Log (read this log to permanently increase your fishing skill by 50, up to a maximum of 600) and Nat's Hat.

Plowmen are peaceful, hardworking Pandaren who cultivate the land to satisfy the hungry appetites of their people.

Gina Griffe de Tourbe, the landlady of the plowmen, is in the village of Micolline, in the middle of the valley of the 4 winds. 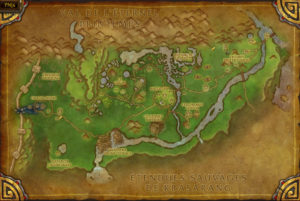 Daily quests are all around Gina, including the farm quest line, related to the kitchen profession. Revered, Gina offers a Pandaren Scarecrow. You have to be elated to buy all the other items: the tabard, the 3 mounts (reins of a brown riding goat, reins of a black riding goat and reins of a white riding goat) and two useless and therefore essential items (set of Gin knives Ji and sepulchral).

The quests of this faction give, in addition, a specific currency, the mark of Iron Paw, which allows you to buy items related to the kitchen profession in Nam Iron Paw, also in the village of Hiccup. Without needing Reputation, you can buy Cooking Components (One Hundred Years Old Soy Sauce, Rice Flour, and Black Pepper), Super Cook's Set, increasing Cooking by 10 (Frying Pan, Rolling Pin and apron), bags containing meat, fish or vegetables and finally unnecessary objects (kitchen school bell and reversible table). At the same time, there are also the 10 reputations of farmers to build, for more information on this, I invite you to read my guide: plowmen: your future friends.

Guardians of the mysteries of Pandaria, these brave souls roam the continent, hoping to learn from their history.

Tan Shin Tiao, the steward of the chroniclers, is in the Mogu'shan Palace, on the left, upstairs, above the entrance to the instance. 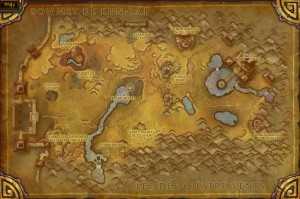 This faction is aimed at explorers and archaeologists and is assembled by discovering monuments, linked to achievements. An inventory has been made on Wowhead which I advise you as well as this video (even if it is in English, just follow the guide).

Across the room, Ms. Thai gives a repeatable archeology quest (don't expect to gain reputation with chroniclers, she doesn't). If you are level 600 in archeology, Brann Bronzebeard (right next to Mrs. Thai) sells Fragment Crates for Restored Artifacts, obtained by replenishing Mogu or Pandaren items.

Hozen: A fiery and violent ape people with a short lifespan

These two reputations rise on their own during quests in the Jade Forest, the first for the Hordid characters, the second for the Alliance characters. In both cases, in the end, it allows you to get Bubble, a goldfish. 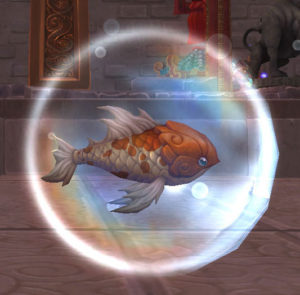 SWTOR - Summary of the livestream