This dungeon is accessible in normal at levels 28-30 and in heroic for characters of level 90 and offers 3 bosses. I will show you some ways to make the ballad go smoothly in heroic level 90 mode. For the record, as with all dungeons and raids now, you can find the list of boss abilities in the Dungeon Codex (Shift-J) if you want more information on a particular spell.

The greatest warriors of the crusade, those who never gave in and defended the monastery in these dark times, assemble a new army within the Scarlet Halls. They are united by their hatred of the living dead and ready to sacrifice everything for the noble cause of their order. 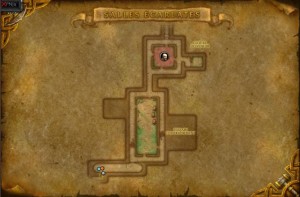 When we arrive in the instance, we rub shoulders with many dogs. You can kill them without thinking (and defeat the achievement) or use them to kill their masters. To do this, you have buckets with food all over the place (bucket of meat-rich dog food). Use them to feed them, they will then attack their masters before falling asleep to a nice quiet sleep. Other dogs are tied up, just get out of their agro area if you want to keep them alive. 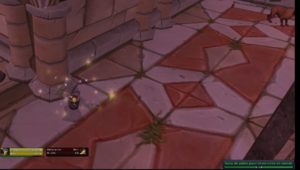 In the first room, clean up so as to access the patio, in the middle, and use the reinforced archery targets to advance to the archers who shoot arrows of fire. 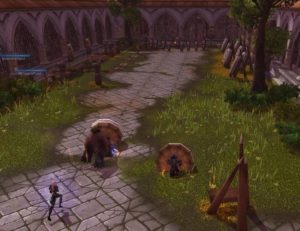 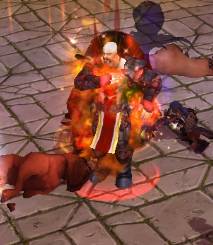 The quickest and safest way to flush out the living dead is the smell of decay that characterizes them, and even the greatest veteran can't compete with a dog's smell. Dogmaster Braun has raised and trained a ferocious pack of hounds to aid the Crusaders in hunting down enemies, whether alive or dead.

This Knife Master, with 12.65 million health, is not very strong and shouldn't be a problem for you. Its abilities are based on sending knives, via Bloom of Death and Piercing Throwing, which apply bloody carnage, a stacking effect that deals damage. Obviously, the more knives you take, the more it starts to sting ... It is therefore better to take care to avoid the trajectories of the knives. At 90, 80, 70 and 60% he summons hounds, kill them (or not) while continuing to damage the boss.

From 50%, it gets slightly annoyed, attacking 50% faster and inflicting 25% more damage: therefore release your most powerful spells first and foremost at the end of the fight.

Humane Society: Defeat Houndmaster Braun without killing a dog in the Scarlet Halls

Advance through the rooms of the monastery, being careful of the gunners who will shoot you as long as they are not dead. 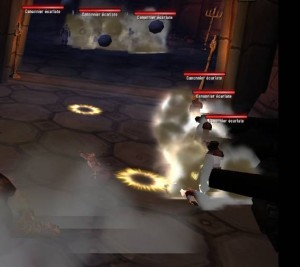 The Scarlet Crusade has many weapons, and initiates should be familiar with the use of blades, maces, arrows and shields, all useful tools in the fight against the living dead. Arms Master Harlan has devoted his life to wielding these dishonest instruments, and he is always happy to demonstrate them to the sacrilegious enemies of the Crusade.

This boss with 12.65 million points of life, has two phases, one where he is quietly in the middle of the room (it does not hurt very much as long as your tank is still alive), just avoid going past due to his dragon grip and a second where he spins for 6 seconds, Blades of Light. This second phase is fatal for any unreactive player. In order to avoid it, go back to the entrance level as soon as it announces this ability, if it starts to join you, you can jump in the middle of the room. Then check which stairs he takes to go down, use the other to go up! 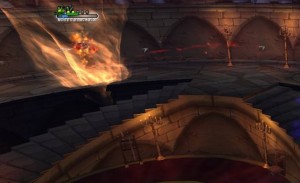 During the fight, he will call for help from the Scarlet Defenders. No need to use AoE damage at the start on them, they have an improved armor, heavy armor, which reduces the damage they take through this by 90%. They must be dealt 60k points of direct damage before, so that they lose their armor, they then become unarmoured and take 150% more damage.

Rampage: Obtain a combination of 8 players and Crimson Defenders caught in the Blades of Light of Arms Master Harlan and then defeat the latter.

The Scarlet Students and Scholars in the following rooms are quite annoying because of the Scholar's shield cast, Scarlet Protection, which reduces all damage dealt to his students by 99%. Interrupt the scholar as soon as possible or it may take a long time.

Flameweaver Koegler trains adepts of the Scarlet Crusade who show a penchant for magic in arcane intricacies. His specialty is fire and he used his talents to burn the archives of the order and erase all traces of the crusade's most glaring errors. Along with the books, its flames turned undead, intruders or students into piles of smoking ash.

This magician is not very strong either despite his 14.73 million health points. He throws large fireballs (pyrotechnic explosion) and an area around him (volley of fireballs) which are both interruptible (prefer the area) when not throwing his accelerated mind which allows him to almost cast instantly his next 3 spells.

As seen above, he sometimes casts the Greater Dragon's Breath, slowly spinning on himself, dealing damage in a cone in front of him. As always in these cases, it is also advisable to turn so as not to be in the trajectory. Finally, his little habit is to burn books with autodafé (not good!), We can either not take care of it (which we do most of the time) or prevent it by placing ourselves between the books and Koegler. . Quite honestly, we never took care of it and we are doing very well, just don't stand near a burning cabinet.

Well done, the Scarlet Halls are once again cleansed from the Scarlet Crusade. You can see the strategy for the other part of the monastery: the cathedral.


Do you want to be up to date and know all the tricks for your video games? In gamesmanagers.com we enjoy playing as much as you do and for that reason we offer you the best tricks, secrets or tips for you to play non-stop. We offer you quality content and always updated to keep you up to date. That's why, in our website, you will find not only videogame guides but also tricks, secrets and thousands of tips so you can play to the limit. Are you ready to get it? Enter now and enjoy your videogame!
PCM – Watchmen ❯