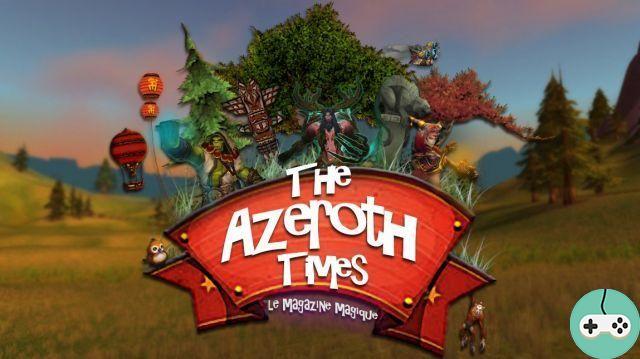 I really wanted to share with you once again a creation of the community and I am going to talk to you today about The Azeroth Times. Created by Thaeron, The Azeroth Times is an interactive newspaper that reports news from the world of Azeroth and its inhabitants. 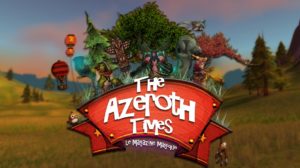 We thus find advertisements, stories, anecdotes ... everything that makes the life of the inhabitants of Azeroth in fact. But the best is yet to find out for yourself!

But I also wanted to know a little more about Thaeron and what prompted him to create this journal. So here are some quick questions I asked him:

Can you explain in a few words the concept of Azeroth Times?
The Azeroth Times is a magazine made for the people of Azeroth. As a player, you are the hero of the world: you attend the great major events of Azeroth. I thought it was interesting to add another point of view, that of an average inhabitant of Azeroth. Indeed, where a player can go around the world, a simple inhabitant only stays in his village or in his town. There is little chance that a citizen of Hearthval or Orgrimmar would go to the Krasarang Wilds in Pandaria to visit this thick - and dangerous - jungle.

Even more, The Azeroth Times gives a glimpse of places we have encountered at one point but have heard nothing from. During an extension we help the local inhabitants to eliminate the dangers then we leave again and after that the region remains frozen in time when in reality, the region evolves. The Azeroth Times offers players the opportunity to contemplate this development.

To another extent, The Azeroth Times offers a new medium that offers a unique experience for readers: on several occasions, certain pages invite you to move your cursor (or your finger if you are on a tablet) and elements are set in motion. . But also the music and sound effects which reinforce the immersion.

What gave you the idea to create this journal?
In the first place, it was mainly a video: the Gnomeregan News which had been produced for the release of Burning Crusade that motivated me to create The Azeroth Times. Then, I loved the "animated" stories of Chronicler Cho, I wanted to do the same thing but in my own way, that's what pushed me to write columns like "To the four corners of the world". And one day, I made a parody for fun of an ad for a perfume that I had put in Warcraft sauce with a Blood Elf in the background: that's what gave me the idea of introduce false advertisements in the magazine. This is what the readers appreciated the most. ? 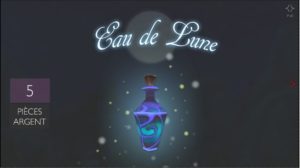 When will the next issue be?
When he's ready, ha ha. More seriously, I'm already working on it. Two pages have already been produced, including an advertisement and a large Kitchen article. You should know that to make a page, it takes a lot of time even to make a simple "advertisement" like "Moon Water".

What type of player are you? PvE, PvP, Achievements, Others? Casu, hardcore?
Normally I'm more of a normal PvE player, I think. That is to say, I limit myself to clean raids in heroic mode. However, from time to time I like to go to the battlefield and do some arenas. We can say finally, that I like to touch a little to everything without being good at a particular activity. But what I like most is walking around, admiring the beauty of the different regions of Azeroth. I never get tired of it.

When did you start WoW?
I started World of Warcraft shortly before the release of patch 3.3.5 which introduced Icecrown Citadel. Now, if I count correctly, it's been 7 years since I discovered the fabulous world of Warcraft. And I never tire of it.

What classes / races do you play?
Actually, since I started WoW, I've always played my Blood Elf Paladin. At the time, I fell in love with this breed in particular thanks to its very rich history. I love being a blood knight. Since I also adore Tauren and Druidism, I made myself a Tauren Druid and also a Pandaren Monk. It is a real happiness. Note that I only play the healer specialization on the 3 characters. Playing DPS has never been my cup of tea.

Which extension do you prefer?
Without a doubt Mists of Pandaria. I absolutely loved everything since setting foot in Pandaria during beta. I fell in love with this magnificent continent but also with its music which still captivates my mind today. The story was omnipresent thanks to the stories of Chronicler Cho at the Seat of Knowledge, the storylines and the quest sequel from 5.1 where the plot unfolded around the Divine Bell. The developers have introduced something new to Pandaria. A philosophy of life inspired by Buddhism which was omnipresent thus forging a depth in the character of the Pandaren who advocate Wisdom, Harmony and Goodness. I admire the immense work of Blizzard.

Other projects?
Yes, I have a few projects in mind. I always walk around with a small notebook, as soon as I have an idea, I write it down and I make a little sketch.

Many thanks to Thaeron for his time and see you very soon for the next issue of Azeroth Times!

Add a comment from WoW – The Azeroth Times, la gazette !