The hunter is a ranged fighter accompanied by a pet fighting alongside him using bows, crossbows and guns and armed with various traps. Its three specialties are precision, animal control and survival, each with its own peculiarities. Survival, which we're interested in here, is a damage-over-time, trap-enhancing specialization coupled with good mobility.

The hunter has changed a lot in Myst of Pandaria, the most salient points are as follows:

We are going to see here the key techniques of the survival hunter and its gameplay, as said above, the survival hunter is very mobile, all the more since patch 5.1 which made the shooting of the cobra channelable on the move. The hunter's mode of play consists of alternating techniques using a resource called focus and others reloading it. In survival, it is the shooting of the cobra that recharges this energy.

The survival burst is also not insane unlike the beast specialization.Here is my order of techniques used in the event of a burst (in this case in the pull):

This order is quite adaptable and varies according to multiple parameters, one or more targets, your rate of haste etc ... Consider inserting arcane shots and cobra shots according to your focus. In rapid fire, you should be able to chain arcane shots between each explosive shot.

When the ready-to-shoot triggers (when the black arrow or explosive trap is active or an ice or frost trap triggers) you get two free explosive shots. This allows you to launch three consecutive explosive shots, this causes a loss of 1 tics on damage over time of the explosive shot (8 tics instead of 9) but it has been shown that the loss was not significant.

In the event that you are at maximum focus when ready to shoot, you can insert a shot between the allow and second explosive shot. A little reading on how hard explosive fire works here.

To manage your focus, the key is to keep neither too much nor too little! Always keep enough focus for your explosive shot and possibly black arrow and empty the surplus with sword throwing and arcane shooting.

The hunter's pets having been standardized, their damage is relatively similar as long as they are well specialized in ferocity. First of all, remember to turn off the rumble! Then to choose your pet, I advise you to adapt to complete the missing improvements in your group.

Here are the most commonly missing and the great classics:

See this rather well-designed diagram that was done before the arrival of the spell haste familiar (extremely useful). 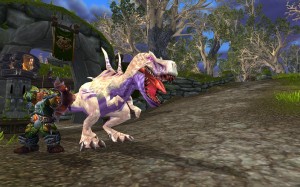 The versatile type talent tree for my taste: 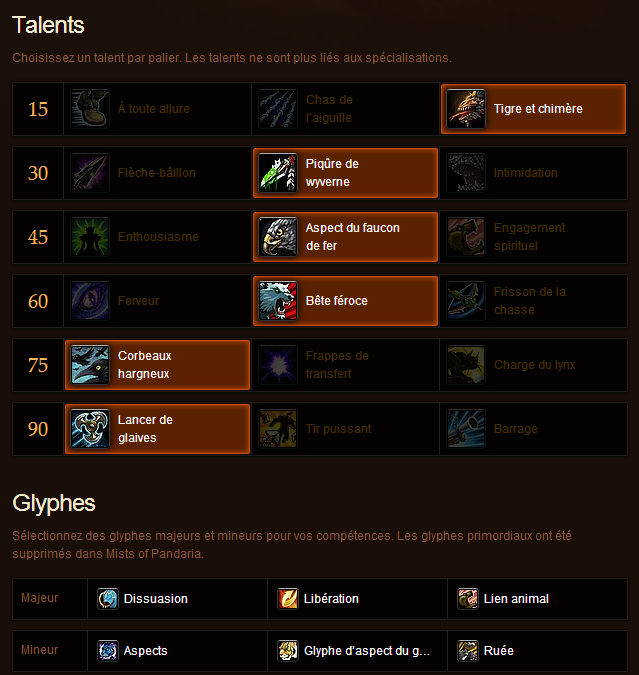 The order of importance of the tracked hunter statistics is as follows:

Reforging is changing a stat from one piece of equipment to another in order to optimize. Use it first to reach your touch and expertise caps and then maximize your criticism. Then choose to favor haste if you have equipment greater than 490. Otherwise mastery!

For reforging calculations, you can use reforgelite as an in-game addon.

The main idea is to favor agility that is much more profitable. If the bonus is interesting (a random agility bonus), you can consider a mixed stone preferably orange with agility / critical (replaces a yellow or red stone) or a purple agility / touch (red or blue slot).

In all other cases, gem agility.

Glyphs now are a bonus and none of them have a real impact on DPS. 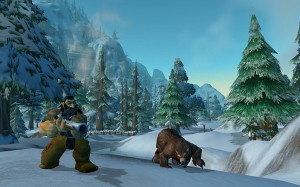 Some tips and tricks on the bosses of raids, this section will be completed as I progress.

Hope this guide is useful to you!

add a comment of WoW - The Hunter Mists of Pandaria Survival