I am inaugurating the new Bestiary section with the species present on the planet Korriban! Here is the map of the planet with the location where you will find these species. 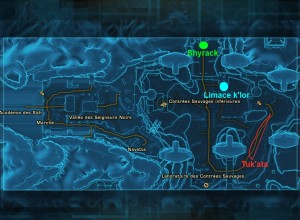 Zone: Edge of the Wilderness

These oversized dogs are bred to become as stubborn as they are reckless. Responsible for guarding the Sith tombs of Korriban, they possess sharp horns, long claws and formidable teeth. They show surprising intelligence and communicate with each other through unknown means.

It seems that this species was once non-violent and living in the pastures, until the experiences of a Sith alchemist corrupted an area of ​​their brain, thus turning them into errors of nature. Now, some tuk'atas are undergoing unexpected mutations, growing disproportionately and being able to live for several centuries. 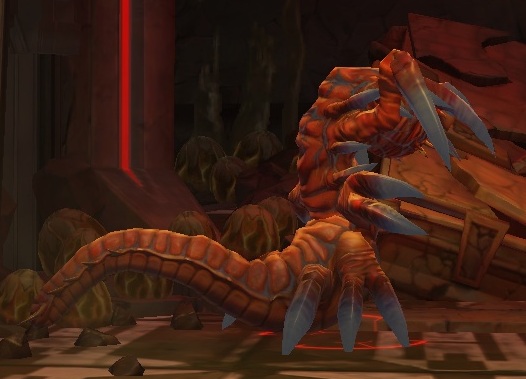 Massive, worm-like creatures with claws and many-toothed jaws, k'lor slugs are among the most dangerous species on Korriban. They can not only slice a man in half or swallow him whole, but also project their venom great distances. Hailing from eggs their queens lay by the hundreds, and benefiting from a short incubation period, these hideous monsters can infest an area in no time. A century ago, a famous hunter by the name of Riegenn Hetuu was tasked with bringing back a k'lor slug queen to an annual Hutts gala, The creature was supposed to be the highlight of the annual gladiator tournament, but when Riegenn arrived on Hutta, four hundred k'lor slugs leaped from the hold, engulfing the hunter and the Hutt, Even today, the sound of a hatching litter is nicknamed "Hutt's cry". 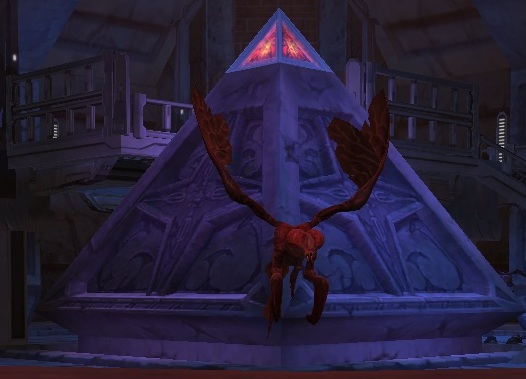 Currently the only way to get this codex entry is to accompany a Sith Inquisitor who does the quest. "Modest knowledge" (Obtained at approximately level 4), indeed the creature in question is only found in the phase of this quest, the other Korriban shyracks do not provide codex entry.

You can also get it by killing the shyracks in the quest "The legacy of blood" (level 8 given by Overseer Ragate at the academy), but again this is a phased Sith quest.

Winged, eyeless monstrosities that hunt in groups, the shyracks sow fear in the caves of Korriban. Fiercely protecting their territory, they ruthlessly prey on any intruder.

Every sixty-three years, the shyracks of Korriban emerge en masse from their caves throughout the summer. They invade the sky, hiding the sun and the moon, and cover the ground with their bluish droppings. Before the Sith recaptured Korriban, biologists from across the galaxy came to the planet every sixty-three years to watch the red earth turn purple.