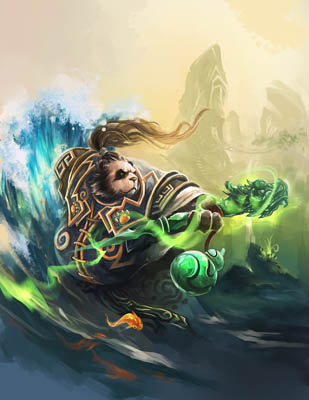 A long article on the Alpha Forum, posted by Celestalon, returns to the painful subject (for healers) of active mana regeneration. Indeed, it was simply deleted in the latest version! 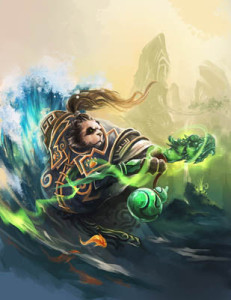 At first, this was not a similar feature to active tank mitigation despite the similarity of names. Finally, it had little impact and that was the concern. Because to make it useful, it would have been necessary to increase this impact, making things totally unbalanced.

They could have increased it but felt it would change the way the healers play too much. Based on active sources of regeneration, then healers would have had to take breaks, using specific abilities to regenerate their Mana, making the game less fun for many new and current players.

Rest assured though: healers will still have a way to control their Mana. First of all by choosing spells from a large panel offering different efficiencies and costs. By being particularly effective, a healer will be able to spend less Mana than it regenerates (in any case in dungeon blue quality equipment). By improving his equipment, he will get more Spirit, so Mana will regenerate faster, while healing will be more effective. If his Mana is too low, he will no longer necessarily have to stop healing: he will just have to choose spells that require less Mana! The Mana will then go up on its own.

Finally, we learn that healers will now all have a way to inflict moderate damage without cost of Mana. The healers will therefore no longer be bored, even when there is no healing to provide!

As you may have noticed, the most recent update to the patch notes included the removal of the Active Mana Regeneration, and I'd like to take a moment to explain that a bit.

First, I'd like to dispel some misconceptions about what Active Mana Regeneration was. Due to the similar name, and how it had its own section in the patch notes, some people were under the impression that it was as significant a feature as Active Mitigation was for tanks; that was not the case. It was quite minor in its impact. We found, based on internal testing, that in order to make it impactful, we'd have to make it much, *much* stronger. As it was, most forms of it were only worth using when you had mismanaged your Mana and were trying to recover. Based on its low and unintuitive usage, we decided to remove it.

Now, a fair question to ask is, “Why not just tune it stronger, so it *is* worth using?” We considered that heavily. There is probably a design where most of your Mana regeneration comes from active sources, and all healers spend a significant portion of their time and ability usage actively regenerating their Mana. However, that is a gigantic change to healer gameplay, for all healers. Many existing healers would not enjoy that style of gameplay, and we're not even sure that it'd be better gameplay for a new player anyway. Overall, we think that, while that option does seem like it could potentially function, it would not be good for the game.

So where does that leave healers for Mana management? Rest assured, healers will still have significant control over their Mana. The primary method for doing that is through spell selection. We've tuned healers such that they have a mixture of high efficiency and high throughput heals. If you maximize efficiency, you’ll actually be spending less than you regenerate (as of about blue dungeon gear), so your Mana bar will actually be going up. The way you’ll spend that Mana is through high throughput heals, which will let you burn more mana for more throughput. As your gear improves, you'll get more and more Spirit, so that your Mana refills faster while casting efficient heals. And that additional Mana will translate into more and more of your spell casts being high throughput ones, as you get better gear. The key, as it relates to Active Mana Regeneration, is that if you find yourself at 30% Mana, and the boss is still at 50% health, you do have something to do to catch up: lean more on your efficient heals, until you catch up. You'll never end up in a situation where you run OOM and are unable to cast anything. Also important to note, all healers have some way to deal minor damage with no Mana cost now, so that they have something to do when there is no healing needed, if you're the type of player that feels compelled to always be casting something.

Do you want to be up to date and know all the tricks for your video games? In gamesmanagers.com we enjoy playing as much as you do and for that reason we offer you the best tricks, secrets or tips for you to play non-stop. We offer you quality content and always updated to keep you up to date. That's why, in our website, you will find not only videogame guides but also tricks, secrets and thousands of tips so you can play to the limit. Are you ready to get it? Enter now and enjoy your videogame!
Book of Demons - A Hack & Slash in a Book ❯

SWTOR - The Heart of Infinity