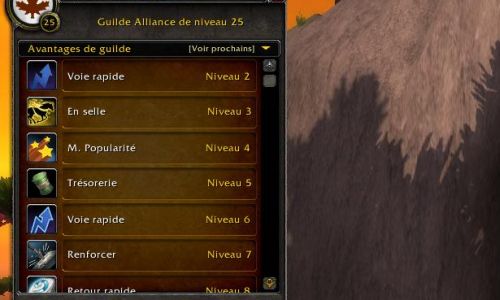 One change I hadn't noticed in the Warlords beta concerns the guilds (at the same time, I don't have one ..). Indeed, guild levels no longer exist! Of course, the players were surprised by this rather astonishing change which had hitherto been ignored. An official response did not take long to arrive on the forum. Thanks to Kathlyn for the help on the translation! 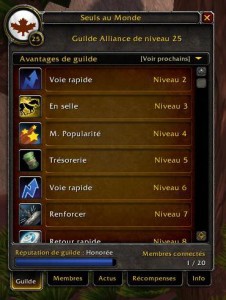 What you can see in the current version is a change in the middle of its implementation.

Since the arrival of the guild system in Cataclysm, the primary function of levels and their perks have been distorted. Instead of being a reward for group work, it became a penalty and a barrier for new guilds. They've made it easier for guilds to level up over the years, allowing low level quests to count towards guild experience or removing weekly limits. These modifications reduce the barriers but it is ultimately nothing more than a misery cache and not a solution that would completely solve the problem.

For Warlords, they plan to remove the level system (you could also say that all guilds will automatically be level 25). They've implemented two dozen perks, in order to offer something at every level, but without that need for granularity (implying 25 perks for 25 levels) they can simplify the system. Many perks can be added by default as the majority of players already have them and the world was designed based on their existence: Griffin trips can go 25% faster without Going Like the Wind; honor rewards and item cost can be balanced as if you had Honorable Mention and so on. For most players who are in max level guilds, the changes shouldn't be noticeable.

They want to continue to entice people to join a guild beyond the benefits. They will therefore keep amenities like speed, instant messaging in guilds, and mass resurrection as exclusive benefits to all guilded players. The guild achievement system, unlocked items, and other perks associated with completing a guild achievement will remain as is. They would also like to go in this direction and put forward a system based on collective achievement criteria more than on guild levels which mainly reflect individual efforts.

The Cash perk is obviously popular, although in most guilds it brings less gold than guild challenges as it only applies to coins obtained as loot. However, this breeds negative behavior: if you've been doing an alt lately, you've probably noticed that you can't go more than a minute or two without receiving a guild invite - usually from officials looking to recruit an army of. players, often without their knowledge, to raise the level of a guild (which they will resell) while increasing the gold which is siphoned into a chest accessible only to this leader. This method puts a significant amount of gold in the pockets of a single player while for raiding guilds it is usually only a tiny fraction of overhead costs like repair costs. They're going to take that advantage away in Warlords.

In conclusion, Watcher reassures players: Blizzard knows that it is essential for guilds to have the means to finance their costs. They will offer more lucrative alternatives to go in this direction in Warlords (like giving back related items when equipped in raid). Information which was also taken again on Twitter.

@Shadesogrey @LodurZJ @Asyluun01 We want to increase gold income, in relative terms, from a variety of group activities (dungeons, etc.).

What you're seeing in the current build is a change that's mid-implementation. Since the introduction of the guild system in Cataclysm, the nature of guild leveling and guild perks has shifted from being a reward for dedication and collective effort, to effectively being a penalty and barrier to entry for new guilds. We've made it easier to level guilds over the years, allowing low-level quests to count fully towards guild experience, and removing weekly caps on progress. That helps ease the barriers, but it's more of a band-aid than a true solution to the underlying problem.

Our current plan for Warlords is to effectively remove guild leveling (you could also think of it as "all guilds are automatically level 25"). We originally came up with two dozen perks in order to offer something at every guild level, but without the continued need for that granularity, we can streamline the system a bit. Many perks can just be rolled into default behaviors, since a majority of players already had them and the world was designed and tuned around their existence: Flight path taxis can just inherently move 25% faster instead of requiring "Ride Like the Wind"; Honor rewards and item costs can be balanced as if you had "Honorable Mention"; and so forth. For most players, who are in max-level guilds, nothing should perceptibly change.

We still want to incentivize guild membership, aside from the social benefits, so we're keeping conveniences like faster mount speed, instant guild mail, Mass Resurrection, etc., as exclusive benefits to all guilded players. The guild achievement system, and unlocked items and other benefits through completion of guild achievements, will remain as-is. We'd like to emphasize that system a bit more as a yardstick for collective accomplishment, rather than guild level which primarily just reflects individual effort.

The Cash Flow perk is obviously popular, though in most guilds it actually contributes less gold to the guild bank than something like Guild Challenges, since it only applies to looted coins. However, it also fuels some degenerate player behavior: if you've made an alt lately, you've probably noticed that you can't go more than a minute or two without receiving a guild invite - typically from "leaders" who are looking to recruit armies of often-unwitting players to both level guilds for later sale, and to increase the amount of Cash Flow gold that is siphoned into coffers to which only they have access. It can be a meaningful amount of gold for one player's pockets, but for something like a raiding guild, Cash Flow gold barely makes a dent in something like total repair costs. We're removing the Cash Flow perk in Warlords.

We do recognize that it's essential for guilds to have ways of financing their costs, and we will offer alternative, and more lucrative, options for doing so in Warlords (for example, bringing back some Bind on Equip epic drops in raids).

Add a comment from WoW - WoD: changes for guilds