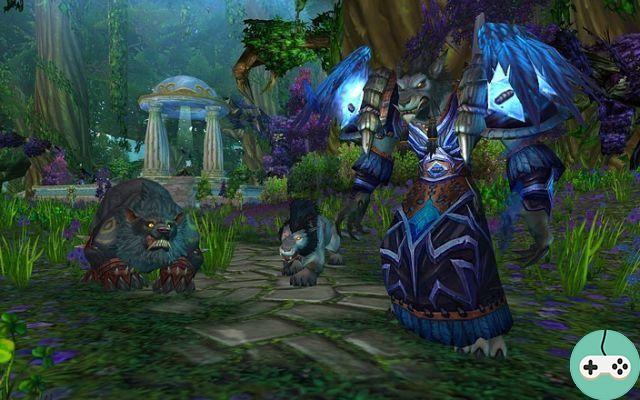 With the new expansion, many players are wondering how healing is going to be changed. Will it stay the same, will we go back to the hard times of BC or is Blizzard up to something else? A topic on the forum answers this question: it will be between Mists and Cataclysm!

Managing healing in a dungeon is very difficult. If the dungeon is too easy, players will complain and finish the dungeon without difficulty and without thinking. On the contrary, if it is too hard, no player wants to go back.

The next question is to know if it comes from the way the player plays or if the proposed spells are too effective. Ion Hazzikostas explains to us on the forum why they decided to change the way of healing. They saw that the healing issue was not mana regeneration in Mist. The only way to kill players was to inflict massive spikes of damage requiring an immediate healer reaction to survive.

Our goal is not to make care more difficult. Note that I didn't say above that the problem with Mist was managing the care or that it was too easy. We want to slow the pace down a bit and give the healers a bit of a challenge, we want the care to be more in making decisions, on the use of a particular spell and targeting, and less in the need to react or follow. a spin as a DPS. It also means that a mistake is not going to cost a player their life, but rather result in greater loss of life, giving you a chance to right your mistake.

You should know that the dungeons tested at the moment in the beta are at their lowest level, to see if the majority of players manage to achieve them without concern. Of course, as the dungeons are not yet in their final versions, it is the same with the care that will need to be provided in this dungeon. As always it is interesting to participate in the tests to see the evolution of the game and anticipate the modifications.

For more information, I let you read the subject of the English forum.

Our target for both healing and dungeon tuning is something of a middle ground between Mists and Cataclysm. It's important to note that healer balance is not yet final, and damage output in our dungeons (especially pure melee damage on tanks, in light of recent mitigation changes) is still being adjusted. So in terms of the raw numbers, we're not quite there yet. The most helpful thing testers can provide is actionable feedback with regard to specific encounters (also specifying difficulty and which spec you were playing). We're listening and making changes on a daily basis.

That said, I'd like to help clarify our goals with respect to both healer gameplay and dungeon tuning. Healing in Mists, especially in raids and especially later in the expansion, suffered from three major problems: 1) the power of healing relative to player health pools meant that injured players could be topped off almost instantly; 2) mana became increasingly irrelevant as a constraint, with many healers actively reforging out of Spirit; and 3) "smart heals" accounted for a very large portion of healing done, meaning that for some healers their targeting decisions were almost meaningless.


Now, some might be thinking, "so you're saying healers were really strong - that sounds great to me!" The problem is that when healing was in that state, the only way we could kill someone in a raid or dungeon was with massive damage, fatal if the healer didn't react instantly; it led to sudden spike deaths, punished latency, and made healing more like whack-a-mole and less like a series of tactical decisions. And in raids, as soon as maximizing throughput becomes all that matters, healing risks turning into a rotation performed irrespective of the encounter or the incoming damage.

Our goal is not to make healing more difficult. Note that nowhere in the above did I say that a problem with Mists healing is that it was too "easy." We want to slow down the pace a bit, and for the challenge in healing to lie more in making decisions about spell usage and targeting, and less in twitch-reaction and sustaining a DPS-style rotation. This also means that the cost of a mistake is not a dead player, but rather a more injured one, giving you a chance to fix your error.

In Cataclysm, fresh 85s had very little mana regen, and if they attempted to heal a dungeon the way they'd been accustomed in late Wrath (e.g. lots of Flash Heals), they'd quickly run out of mana. In Warlords, players have significantly higher base regen, and less available Spirit from items, so that you'll start off with a much deeper mana pool than is usually the case as a new max-level healer, while avoiding the problem of mana becoming irrelevant once in endgame epics.


In Cataclysm, nearly your only efficient heal was also your smallest, and it was easy to run yourself out of mana and feel helpless as you watched your group die; in Warlords even if you are running on fumes mana-wise, you can still sustain a steady stream of Greater Heal or Healing Touch or the equivalent. You aren't helpless.

Now, as for dungeon difficulty, one of the challenges in adapting to new dungeons at the start of an expansion has been the contrast between players' habits at the end of the last expansion when they massively outgear every dungeon, and the different approach required when undergeared and running a dungeon for actual loot drops instead of currency. The ability to recklessly pull multiple packs of mobs at once and cleave everything down is something that you earn and grow into as your gear and knowledge of the content increases - that's never been the intended dungeon gameplay when the content was brand new, even for our "easy" dungeons in Wrath or Mists.

Normal dungeons should be pretty easy. Some of them aren't quite there yet. But you should feel confident that you can push the "Dungeon Finder" queue button and land in a random group with a high chance of success. If you don't feel that way about a given Normal dungeon (especially a level-up dungeon), please let us know why not. We have a solid chunk of level 100 Normal dungeon content that everyone should be able to jump into when they hit max level, and Normal dungeon loot will be sufficient to qualify you for Highmaul LFR when that unlocks.

Heroic dungeons will be somewhat more challenging, which is the reason for the Silver Proving Grounds requirement to random-queue for them. We're not looking to recreate Heroic Stonecore or Grim Batol or The Arcatraz, but there's a middle ground where mechanics can still matter.

Finally, it's also worth noting that in beta, we're scaling players down to pretty much the lowest possible level and item level at which you could be running a given dungeon. Nearly all groups in the live game will be better-equipped, but we need to make sure the content is viable at the minimum threshold. 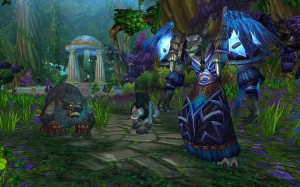 I can't wait to see if Blizzard has succeeded in rebalancing things!

add a comment of WoW - WoD - Heal in Warlords