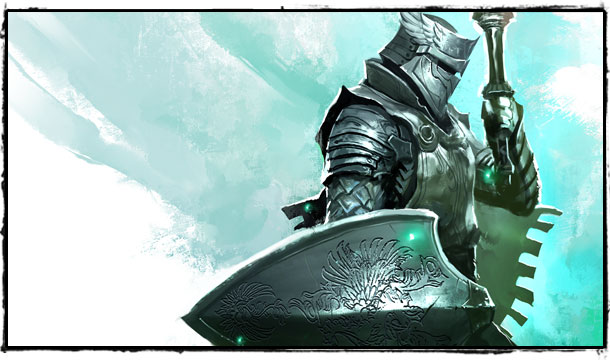 I am protecting you. They will have to run over my body first! 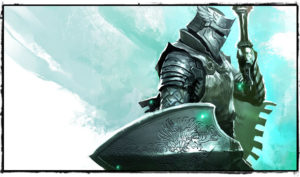 Devotion: this is the watchword of the guardian, who invokes powerful Virtues to slay his enemies and protect his allies. Wielding both staff and hammer with equal mastery, he is a skilled tactician who does not hesitate to sacrifice his own defenses to give his allies the ascendancy that will lead them to victory.

The Guardian has many weapons, both melee and magical.

2-handed weapon.
To handle a sword with both hands is to take the risk of being carried away by the blow, unless precisely taking advantage of the inertia of the blow. So the Guardian who uses this weapon will use their momentum to deliver area-of-effect sweep attacks while moving.

2-handed weapon.
The hammer allows whoever wields it to knock down enemies, especially with area attacks by hitting the ground.

1-handed weapon. Secondary hand.
Fast weapon coupled with many striking and moving skills. Managing the distance between you and your opponent as well as your position in relation to his shots is of paramount importance.

1-handed weapon. Main hand.
Mace will be a dreaded weapon of spellcasters, allowing skills to be interrupted by knocking out victims and making them more vulnerable to additional attacks.

1-handed weapon. Secondary hand.
When the Guardian is equipped with a shield, he can decide to block projectiles or spells. Any hit that is blocked deals less damage.

1-handed weapon. Secondary hand.
Allows the character carrying the torch to have some fire-related skills.

The trident is a long-range magic weapon.

The Guardian has three special abilities, or Virtues, that grant him passive benefits in combat:


Do you want to be up to date and know all the tricks for your video games? In gamesmanagers.com we enjoy playing as much as you do and for that reason we offer you the best tricks, secrets or tips for you to play non-stop. We offer you quality content and always updated to keep you up to date. That's why, in our website, you will find not only videogame guides but also tricks, secrets and thousands of tips so you can play to the limit. Are you ready to get it? Enter now and enjoy your videogame!
FFXIV - Memoirs of the Seventh Plague II - The Sultana and the Seven Lalafells ❯

Shadow Realms: What about the community?