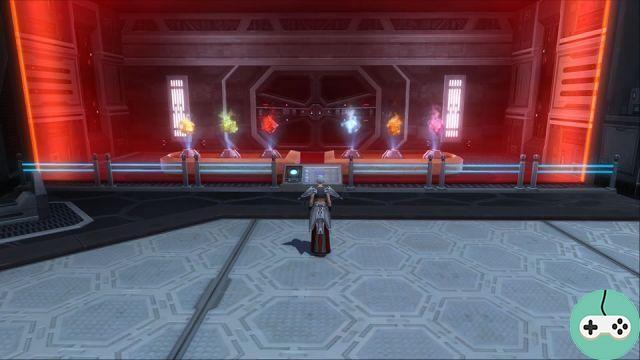 After the missions of the spaceship and the chamber of eternity, I come to tell you about another mystery of the game: the Datacron + 10 All stat!

YES it exists, it is not a rumor and YES it is on the fleet. 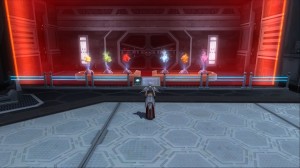 Now that you have the answer to your question, the choice is yours:
- Either you spend hours of fun and research looking for the room, understanding its mechanism etc etc ... then go your way
- Either you spend on the investigation to concentrate on the essential: the action.

To have access to the precious you need some prerequisite: you must be level 45+ to be able to take it and you must be at least 4.

In addition, you need 2 items: 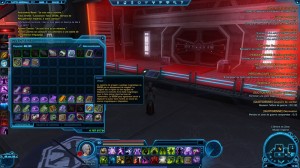 Your future object of mental torture

Once in possession of your prerequisites, head to the Fleet Museum! " The what ? Never heard of a museum on the fleet… ”some will tell me and this is quite normal since it is a secret room (well we have already seen secrets that are harder to find anyway).

To access it, you simply have to take an elevator that is not listed on the card. For the Empire, go to the Shadow of Ziost at the footbridge, then all the way north. For the Republic, it's the same thing, but I don't know the name of the ship. 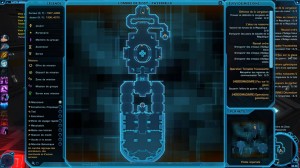 Here is the elevator.

Now that you're in the museum, there's going to be a whole bunch of things to activate. Once again, if you want to find this riddle on your own, now that you have all the prerequisites then close this page and have fun finding it on your own. 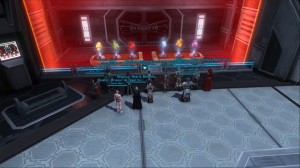 Much more fun to do in guild and PR

To achieve this power, you will have to respect different commandments!

The first thing to do is to die in order to reach a platform thanks to the medical center located there. To do this, play with the laser located in the museum. Once returned to the force, (especially do not take the medical probe which resuscitates you at the place of your death so is of no use in this case). Take the medical center which is right behind you at this precise moment, at the foot of the tank.

A priori, people experienced in speeder jumping can avoid this death and jump. Finally, for that, it would still be necessary to know how to aim! 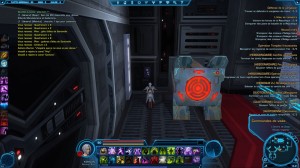 What is this button for ???

2. Destroy the door you will have to

Now that you're on the platform, you might as well take a look around the tank. Inside is a fire command that will allow you to destroy the door located in front of it.

3. A piece of crystal you will take

At the end of the newly discovered hallway is a door that allows you to reach crystals on display. Take a good look at the middle one, you can take a little bit 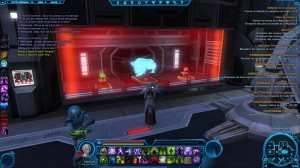 We said a little bit! Leave some for the others!

4. Put everything in place you will

Now that you are in possession of this crystal, all you have to do is place it and the one found on Corellia in the statue located on the other platform in the museum. This will allow you to temporarily deactivate the force field next to it. Once through the door, you are now in the last room before reaching our precious ... but that is not done ...

5. The consoles you will activate and through the bridge you will pass

In order to be able to reach the other part of the room, you need to activate a temporary bridge. As much until now, one dedicated person was able to do everything for the others, as much from now on, it will be necessary to work together at 4.

To activate the bridge, you have to press 3 consoles at the same time. This allows the 4th player to cross. On the other side are the same 3 consoles. It is then necessary that the 2 players still in place (the former 3rd is in place to cross in turn) and the one on the other side, press again on the 3 consoles (3 different) in order to pass the second player, etc etc etc. 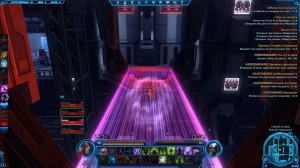 6. Proof of address you will do

All without dying of course otherwise you will have to cross the bridge again! Die ? oh yes ... I forgot to tell you that to reach the switches, you will have to jump / walk along metal beams above the void. 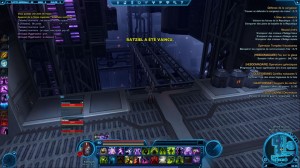 This is what happens when you have a ball in your group ...
you have to start all over again ... 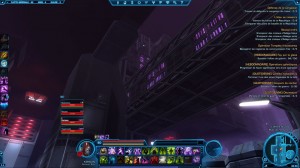 In place, Ready to shoot to reach point C.

Only here, the grapple at a maximum range which, if it is exceeded, brings you back to the starting point. In addition, if you touch an element of the scenery during your "cluster" you risk falling and therefore ... death. No problem to reach switches C and D, just get as close as possible. But for the E and the one at the end gate, that's another story.

7. Of speed you will show

In addition to reaching the last switch, the 4 must always be on (lasts about 2 minutes) to be able to activate the last grap. For a while, the / stuck command returned to the ideal position to use the grapple, but during our various tests, it did not work, so we had to do without. Here's what to do if it's the same for you.

A and B activate their switches. While C and D use their grappling hooks, A snaps into place ready to shoot at an unlikely angle (to be checked, but may work if only you're slim).

C and D activate theirs. A then uses his grappling hook to reach base 1. As soon as he has activated his switch, C goes back down then jumps on the metal beams through which the other players have passed to stand directly in front of base 1 and he shoots it. In the meantime. Our player A has had time to reach base 2 and activate switch E. From where they are, A and C can shoot the last base to reach the 3rd and therefore the door.

It is then sufficient to start again by exchanging the places of A and C by those of B and D. 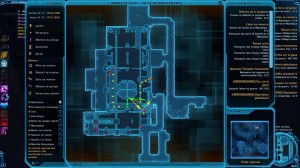 Yellow course: path to follow once the switch is on for players A and C

Yellow arrow: path to be followed by player A

Green arrow: path to be followed by player C + any player beyond the 4th (if you come at 10, 6 for example wait directly at the green C)

Add a comment from 1. Die you will have to