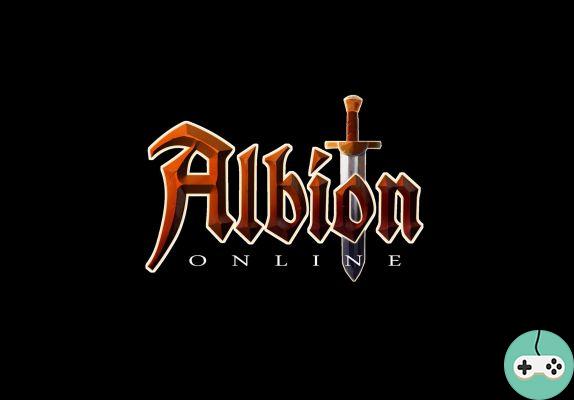 Albion Online is a cross-platform Sandbox MMO developed by Sandbox Interactive (and we can say that they chose their name well). To begin with, let's talk about Sandbox. Literally "Sandbox" understand here that the designers did not set predetermined objectives, it is up to all the players to create and change the world. In Albion Online, the concept is taken extremely far because everything is left to the good care of the players: cities, businesses and even equipment. You can only buy those that other players have created.

And the game is multiplatform since there is a single server for PC, Mac, android and iOS players (we are talking about tablets here and not smartphones).

Like any MMO we start with the creation of characters. 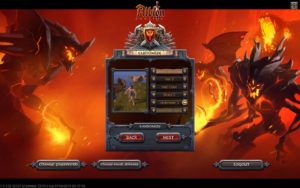 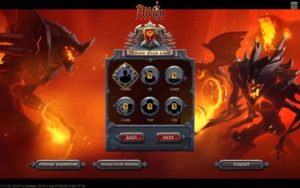 The creation is relatively simplistic. However, it allows you to choose between 6 races, to choose your portrait and to slightly modify the appearance of your avatar.

Go! It's time to embark on the adventure. The Sandbox has the advantage of letting the player manage everything but, if we do not invest enough, the player can feel lost. To avoid this feeling common to games of the genre, here no quests or tutorials but a common thread will guide you. 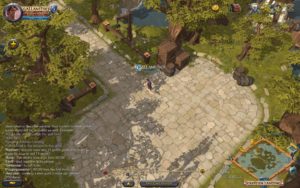 There is something to feel lost when you start like this.

If you look down, in the middle, you can see an objective (harvest wood). Once this is accomplished, a new objective appears allowing you to understand the basic mechanics of the game.

Once you get to town, you need to get the necessary tools for harvesting and, of course, armor and a weapon. You can collect fur, wood, stone, minerals, and even flowers.

Once you have familiarized yourself with the basic mechanics of the game, I strongly recommend that you take an interest in the chat channel. If you are lost, do not hesitate to seek advice from more experienced players. And of course, find yourself a guild to fully enjoy the game.

The big question now is: what role are you going to play in this world? Well that's up to you to decide. No good or bad combinations; only those you like.
Want to deal damage? Cash them in? Or treat your friends? Well know that it will all depend on what equipment you are going to create. When creating a piece of armor or a weapon, you choose the associated bonuses. Take more damage, receive more healing, do more damage etc ... 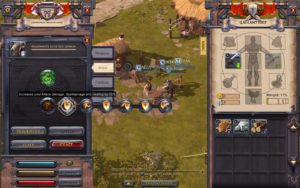 Creating your equipment will require several tries to be effective.

In addition, equipping a piece of equipment grants access to a spell. Here it is in green in the left window. This spell is a channeled healing to help you get back on your feet after a fight.

Speaking of fights, how's it going? Well it's simple, maybe a bit too much. Just click on your target and then choose the spells you want to use knowing that your character remains in automatic attack. 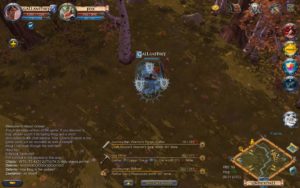 Well it's a fox, but a fox can be dangerous!

The first enemies are animals: foxes and rabbits. But you can also come across groups of heretics who are sure to show you the beginnings of magic.


At this stage, you know how to harvest, create and fight. Now you can get scared by discovering the board of destiny. 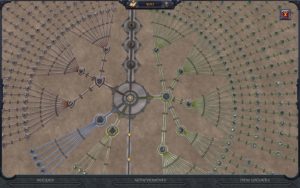 Yes, it is great! And no we do not see everything.

So let's keep it simple: on the right, it's all about the making and on the left everything related to combat and "classes". To become more and more successful in a field, you just need to repeat the basic tasks. You know the proverb, it is by forging that you become a blacksmith and it has never been truer. For example, do you want to become the best archer in the kingdom? 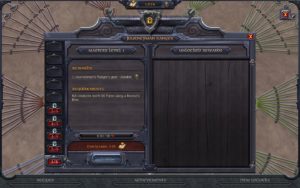 Here is the first level of archery.

Just make a basic bow and go hunting. Once this rank is completed, you will have access to the next tier of equipment. So on until you have complete mastery of your equipment and skills. So you can do everything with your character on Albion, and that's important because you can only have one character per account.


Now all you have to do is choose a direction in which to go and face the obstacles that stand in your way. But before that, do not hesitate to get a mount because you will see that the global map is quite huge. 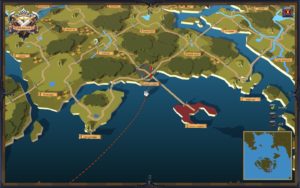 The world of Albion is very large!

Housing is also an important part of the game. Even if I haven't been able to tackle it yet, you can build your house or even be part of a city created by players. And, for the more solitary, you may even find yourself on a small private island.

Realize that the items in your house are all useful. Trophies are sources for improving your stats, as well as eating or resting. Having several cabinets also allows you to accommodate more players, so you can live with several under the same roof.

We just talked about the mechanics and operation of the game, now let's talk about feelings. For me, this game is a great surprise. Once the step of getting started, it is very pleasant to travel the world that Albion offers us. Afterwards, I realize that you have to adhere to the artistic direction at least to get hooked on the environment. What I also appreciate is the freedom: you can easily play in a relaxing way focusing on craftsmanship or on the contrary go in search of combat. 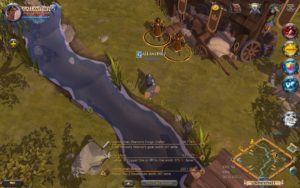 The game succeeds in creating a universe in which one is completely lost. And that's exactly what I'm looking for when playing an MMO. We are pushed towards other players and towards exploration. We are progressing all the time and we are constantly discovering new things. To sum up, the game won me over and I'm really waiting for the release to be able to travel this world in good company.

Finally, I leave it to the developer to talk about this little gem (video in English):