Albion Online is entering its final Beta phase before its official release. A lot of information has been given over the past few months, here is a small summary of this information as well as a small FAQ. 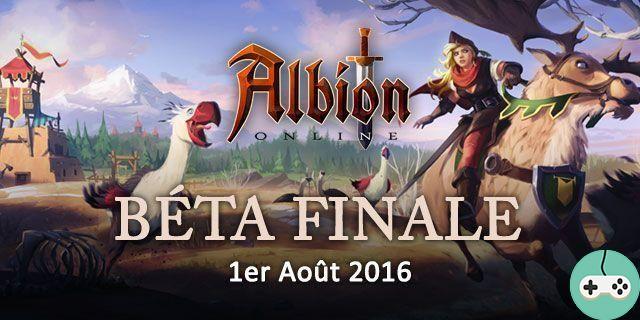 Albion Online is a game that made its debut in beta 1 at the very beginning of 2016.

A major update is planned for August 1, in the form of a final beta before the official launch scheduled for soon. A tablet launch is also expected for the start of 2017.

Albion Online is a Sandbox MMORPG (sandbox, for spanish speakers) in which anything goes, well almost. Without class limits, the player can play any type of character by directing their activity as they see fit. Fans of PvP, GvG in Full Loot, or PvE or any other quieter activity such as trading, crafting items or even breeding will find their place. Because everyone is useful for the development of this magical world.

For now, the Berlin studio SandBox Interactive is focusing its attention on the PC version of the game, but you should know that Albion will also be accessible on MAC or on mobile via IOS or Android thereafter.

The universe of Albion Online

The world of Albion takes its inspiration from medieval fantasy, populated by creatures and demons, in an atmosphere of magic.

Players will be able to equip themselves with enchanted weapons and armor, ride horses, buffaloes or wolves in turn, collect valuable resources and fight fierce and demonic creatures, in small groups as well as large guilds. . You can choose to play as a great conquering warrior or a magician with multiple spells, as much as a simple trader or a breeder.

How do I play Albion Online?

Albion Online is a downloadable client to install on your PC.

To register, nothing could be simpler: just go here, create an account, pay for your pack (three packs to choose from) then install the client to finally play. As the business model of the game is based on the principles of Buy to Play, the customer is bought once. Thereafter nothing will have to be paid by the player, except in virtual currency resulting from the trade in game. Otherwise, the economy in game remains carried by the players themselves.

Is there a Premium status?

There is a premium status accessible in-game, which can be acquired for gold and which gives many additional benefits to the future player.

Premium status can be accessed by clicking on one of the buttons at the top right of your screen.

What are the advantages of premium status?

What are the end points in the game?

When a new player comes into play, after creating his character, he arrives at a drop point where he can start playing.

An area of ​​the large world map of Albion is reserved for Europeans with four drop points, “spawns”, in which the new player can start to equip themselves with T1. From this area you will have access to a first village which will allow you to improve your equipment and then join your guild, if you have one, via the port for a few silver coins. The boat will bring you close to the town closest to your guild.

Each player will therefore start, alone, in this zone reserved for Europe, "parachuted" at random, in non-hostile territory.

How to have a first equipment?

How do I get a mount?

Several ways to obtain a frame are possible, more or less long:


How to join a guild?

When you start in your destination village, you will need to:

Is there a place for the big guys?

The world of Albion is vast and made up of territories classified into different color zones according to the dangers and the possibilities of orientation. All profiles are possible in order to contribute to the evolution of the game, so experienced players will find their place as much as small players, especially in the territories of the Distant lands in which the orientations PvP are put in complete freedom. Only downside, aggressive players will have to suffer the consequences as to their notoriety, to good understanding.

Playing "casual", is it possible?

The player who will tend towards a lighter game, with a tendency JcE, focusing its game on breeding, trading, harvesting and the creation of objects will find its place without worries in the territory of the Royal Islands, watched over by the Royal Expeditionary Forces. But be careful though, it will not be immune to ambushes and potential attacks from Shadow stalkers and Outlaw who want after his riches.

What are the Royal Islands / Outlying Lands differences?

With the Final Beta, the developers of SandBox Interactive have worked in new areas: Biomes. Three in number for August 1, they will increase to 5 thereafter. Their particularity is to offer players new atmospheres with specific resources.

Where to find the first important resources (T3)?

When you are in your village, three directions are possible: North, East and West. You will have to venture into the different territories (clusters) in order to start harvesting these important resources.

However, do not get carried away, you can harvest resources up to third 2 in the village itself (existing in small quantities, often exhausted if there are many players)! On the other hand, the more you climb in thirds, the more you will be forced to venture further and further.

At any time, you can click on the map, at the bottom left, to display it, then click on the sector that interests you to see if the resources you are hoping for are there.

In each territory on the outskirts of the village, the player can find dungeons of varying degrees of difficulty and practice in order to recover currency and reputation. This will unlock your Superior Thirds more quickly.

What and how does the reputation system work?

The reputation system was designed to help regulate player behavior. It takes effect in the territories of the Royal Islands and inflicts punishments or gratuities according to the actions of the players on the rest of the community, within these territories under royal protection. A player's reputation value will be displayed after the nickname in the form of an icon going from the cross to the skull for the lowest levels:

Artifacts are special items with an enchanted core to be collected from difficult creatures of each of the factions and large bosses in order to be able to forge powerful weapons with specific spells.

You will be able to collect whole artefact cores or just fragments that you will then have to assemble to obtain a complete artefact. Suddenly, these artifacts will give access to new weapons, accessible from third 4 to third 8.

What are the new weapons added for the August release?

At first, not all weapons will be available immediately. The rest will be implemented throughout the Final Beta.

You can still have access to some of them with unique spells and very evocative names:

How to create a guild?

To create a guild, nothing could be simpler. It suffices to collect the modest sum of 12 pieces of silver, to raise the guild tax to 500% for recovery of this tax in the guild coffers. As soon as the amount reaches 90 coins, you can create and obtain your guild.

Once you have created your guild and joined it, you will need to start constructing buildings in order to level up the guild island.

All the basic buildings [Weaving, Tannery, foundry, sawmill ....], equipment [Mage, Warrior, Hunter] and the more advanced [Pasture, saddlery, Transmutor] will allow you to keep your own production autonomy.

It is possible to destroy a building when it has become obsolete and it bothers you. Just forge the demolition hammer, accessible from the start, and "bang" on the building.

Does the August update make me lose my skills?

When the Final Beta launches, everyone will start again from their point of arrival. Everything will have to be redone! In addition, founding players will be able to collect the content of their pack, including their T3 equipment.