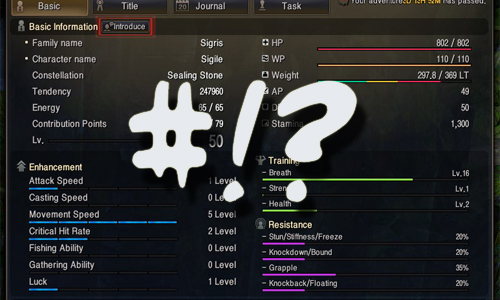 Like its MMORPG brothers, Black Desert is based on a system of Characteristics and basic values ​​that can be found, as is generally the case, in the character window (P by default). 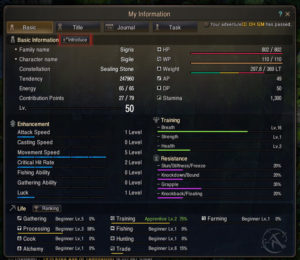 Here is an overview with some details.

Last name : the name of your account, obviously common to all your characters (be careful, however, unlike some other games, it is not displayed after your character's name but below.

Character name: The name of your character this time.

Constellation : Beyond the cosmetic aspect that it seems to be (and that it is actually not at all) the constellation will actually grant you an affinity bonus with the NPCs in accordance with yours. As knowledge is shared by your characters within your family, it may be relevant to choose a different constellation for each of your characters.

Karma : Corresponds to your tendency to be more or less hostile towards other players. A high Karma (capped at 300) means that you are relatively peaceful, while a low or even negative value obviously implies the opposite.

On the other hand, there is no penalty for the person defending himself, and moreover, bringing him assistance is not sanctioned either.

It should be noted that in the event of death with negative Karma, penalties may apply:

Energy: Common to all your characters, Energy is used to perform critical actions. Find out more.

The Points of Contributions: Common to all your characters, is used for strategic investments. Find out more.

Your Character Level: Directly confronted with the level of the monsters you will face to deduce the difficulty. Be careful though, the level of enemies is not displayed, instead their name is displayed in a color depending on the level's deviation from yours. Thus by upgrading a monster by 5 or more levels, it will be displayed in gray, while an enemy of 5 or more levels compared to yours will be in purple.

In addition, it should be noted that this difference also significantly conditions the chances of loot, namely that they are increased when you face stronger than you, and are reduced if you outclass your enemies.

Accuracy (Accuracy): This Characteristic is not displayed but is nevertheless present. Indeed, you may well be required to find Gems or equipment offering a Precision bonus thus serving to improve your performance against targets with a certain dodge value.

Dodge (Evasion): Again a characteristic not displayed, coming directly in opposition to the Accuracy and providing a greatly reduced probability of damage. Skills, equipment, or a level difference against you can give a Dodge bonus.

PV (or HP): Your Life Points, you have to try to always have at least 1, that's better. Progress with your character level. Can be increased via Training.

MP (or PM): Your Mana Points, is used to launch your most powerful skills. Progress with your character level. Note that some Skills use your maximum MP value to add bonus damage.

Weight: Indicates the maximum load you can carry, as well as your current size. Can be increased via Training.

PA (or AP): Your Attack Power directly conditions the effectiveness of your offensive skills.

Endurance (or Stamina): Your gauge for peak activity movements such as running, instant sideways movement etc. Note that some Skills can use this resource rather than your MP, and still other skills can automatically replace your lateral movements in the event of an empty gauge. Can be increased via Training.

This section deals with the 7 Characteristics which can range from 0 to 5 (strictly) and which provide more or less explicit advantages.

Note that temporary improvements (buffs) in the form of potions, foods can however be added to your Characteristics. In other words, having equipment providing level 5 in attack speed and equipment providing enough to have 8 levels will offer the same bonus. However having level 5 and a 20% bonus works and thus offers a 40% gain.

Also know that you can go below level 0 (the bar then becomes red instead of blue) because of various penalties, and that these negative levels have a heavier impact than the bonuses (estimated at around 10%)

Attack Speed: Increases the speed at which your hits are landed. 4% bonus per level (and therefore + 20% at level 5).

Casting Speed: Same as above but for the magic.

Fishing skill: Increase the speed at which you catch something.

Chance (Luck): Increases your chances of loot on monsters of a level close to yours (+1, - 1 or the same). Gain estimated at 10% per level. Cumulative with higher level Nodes.

Corresponds to the Breath, Strength and Health bars detailed here

Here are the defense characteristics other than the pure damage reduction provided by your PD. They are divided into 4 groups:

Even if at first glance we do not see a concrete difference between Landed and Reversed since in both cases we find ourselves in communion with the pebbles, the real nuance lies with the Skill you will have to cash.

Indeed the Skills inflicting this kind of effect are clearly defined. So by having maximized your resistance "2", you will know that the [Earthquakes] of the Magicians, even if they will inflict damage to you, will have much less chance to send you back chatting with the ferns. However [Earthquake] also has a "1" component which can still affect you.

Note that in PvP these resistances are capped at 60%.