BOMB : Who let the dogfight ? – Aperçu 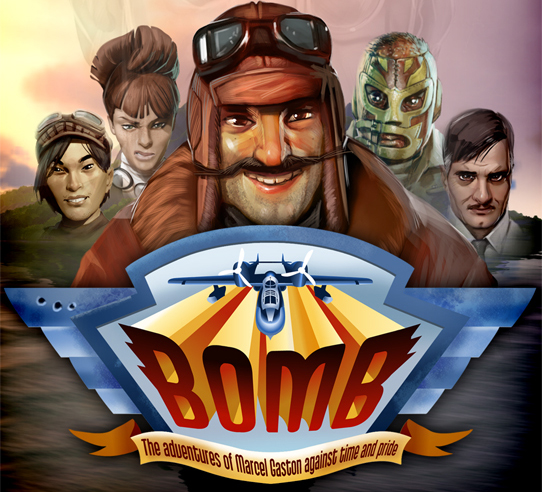 Let's find out together BOMB : Who let the dogfight ? or more simply Bomb, spanish game from La Mustache Studio! To introduce this multi-faceted, cross-platform aerial simulation game, nothing better than letting you experience one of the trailers for it.

Small negative note : you will find on steam the minimum and recommended configurations for this game. I will let you see the technical details there, but I would like to draw attention to one of the recommendations: owning a controller / joystick. In reality, without it the game is simply impossible, I will come back to this a little later. This essential controller makes the possibility of playing on a Mac (for example) very unlikely given the lack of controller compatibility. For example, on a famous site with the name evoking a group of female warriors from antiquity, less than a dozen mac-compatible controllers are available, and for prices over 250 euros. In short, in theory we can play on several platforms, in practice, it is not so obvious!

Bomb is therefore an airplane game that has several game modes: story / campaign, multi-player, skirmish, survival. Let's take a look at these in detail, as well as the options menu. 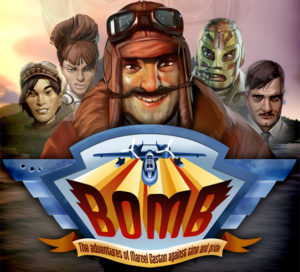 Unfortunately, this is a mode that I did not have the opportunity to test, only one server (which is more empty) being available during my playing hours.
You can also choose to create a game server, you have the choice between 6 maps, available in deathmatch or team deathmatch mode, and one of them is also available in race mode.

This mode allows you to create a quick game in which you face one or more enemies controlled by the computer and having the parameters you have chosen. The available parameters are quite numerous: you can vary the number of enemy squadrons (up to 4), the number of aircraft that compose them (0 to 4), the type of aircraft (8 available) as well as their level (from 1 to 5). You can also decide whether or not to include other specific items like a freighter or a building. You also choose the map (5 available) on which the skirmish takes place, as well as your plane (8 available) and its heavy weaponry (one or two weapons depending on the plane).

Game launched, fight against the planes, destruction of these and… and nothing, the game continues to run without specifying anything of the victory or not. In addition, adding buildings and other specific elements does not seem to work (impossible to find on each try).
A nice mode despite everything to play quickly, train, test another type of weapon / aircraft or challenge yourself. 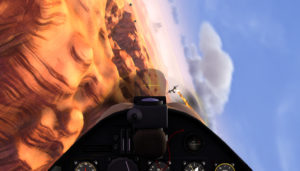 Survival mode is part of a "Mission" mode that allows you to play specific missions to do yourself. Among these missions are the "free flight" mode which allows you to fly freely in a map, 3 mission samples created by the creation tutorials (see this page for the first) and the survival mode.
Survival mode allows you to face 4 successive waves of enemies, made up of 1 to 32 enemies.
A friendly mode to test your ability to escape and resist your opponents. 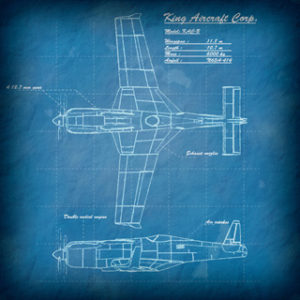 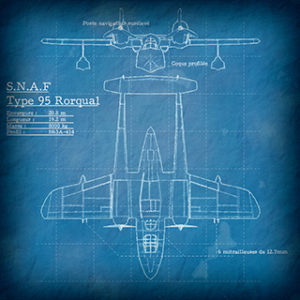 This is where the problem lies. If we are to believe the description of the game, and some steams comments, the adventure would be epic and full of humor ... not for me! The annoying thing about humor when you try to put it on is that humor depends a lot on tastes and colors.

Story Mode breaks down into missions, each of which can be replayed whenever you want once you've completed it the first time. Each mission is divided into 2 phases, a first phase of "kinematics" during which you can follow a discussion in the form of a text frame changing when the mouse clicks, each time surmounted by a portrait of the character, representing him in the picture. state in which he is (angry for example), in front of a set. Then the flight simulation phase where the fights take place. 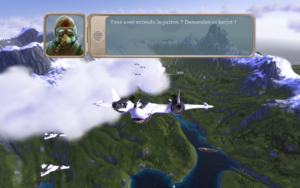 Here, you play Marcel Gaston, aviator (apparently frankly), nicknamed La Mustache and having won many races during his youth. At the controls of your plane you will face hijackers, both male and female, zeppelins and a whole lot of other things in an atmosphere of debauchery and alcohol.

If you liked OSS117 and its humor, then maybe you will like this game. Your alcoholic pilot remains a pathetic character, and not at all epic (always according to my own taste). I only did the first few missions, too, maybe this evolves later in the story but the technical issues (I will come back to this in Gameplay and Performances) and the uninspiring story didn't make me decide stubbornly to find the end. 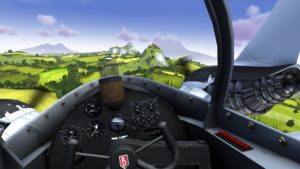 The initial idea could have been good if the evolution of the character had been done more quickly.

Side action, the scenarios are varied and sympathetic, air attack, attack on the ground, conditions on the speed and the altitude for certain particular bombs, defense, escort… there is something on this side for all the tastes. The first two missions are more or less content to wander around the map, so the start is a bit long, but the rest is more interesting.

The options panel has 6 tabs: General, Graphics, Controls, Arming, View and User Interface. The Graphics tab allows you to control the quality of a certain number of elements. Side User Interface, not much configurable, the size of the icons and their opacity, aiming assistance and the display of activatable / deactivatable distances and that's it. In the General tab we find the option "easy mode" to check or not. The Controls / Arming / View tabs allow you to change the key assignments. 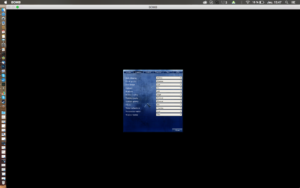 The planes are well modeled as well as their smoke, the effect of the blast of their passage very close to the water. There are also several styles of cockpit depending on the type of aircraft. The weak point on the graphics side, if one is needed, would be the trees. The strong point concerns the animation of the crashes, when you shoot down an enemy, it does not explode in flight but one of its wings, for example, catches fire, breaks up then the plane noses down. 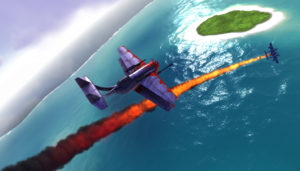 The story, that was where the shoe hurt, it was the first thing I tested… The gameplay and the performances, this is where the shoe ends we could say. The game itself is not bad enough to boycott it, just the enthusiasm to play it is greatly diminished, until the next update at least.

Namely that I tested the game on two machines. The first is a Macbook Pro, the characteristics of which are:

This one allowed me to set the graphics to high quality, which is why I started testing on this one. Performance level, no fluidity worries, note however that the loadings, whether for the "kinematics" or the simulations, are quite long. This is not much of a problem in itself since it will not prevent you from being able to play. Note, three bugs on the mac version (but which do not occur on the windows version):

Unfortunately as I noted above, mac and joysticks are not extra compatibility level! So here I am testing the keyboard / mouse game, which has never bothered me on many simulation games (Crimson Skies for example, a reference for me). In the options there is therefore a checkbox to control the device with the mouse, however, even if, once activated, this option allows to control the movements of the device, the mouse also continues to control the orientation. of sight. So that… that as soon as you want to turn with your camera, the view also turns and piloting is impossible. Or in any case very difficult.
To be quite exact, the problem with sight does not occur if you hardly move your mouse… but aerial duels while flying in an almost straight line… nothing exciting!

After several unsuccessful attempts, I therefore resigned myself to installing the game on my old Windows Seven PC (a laptop too), on which the joystick is compatible but which is pale next to the Mac in terms of characteristics:

Here, no problem for the full screen, and the options remain good from one launch to another. On the graphics side, I had to test it at a minimum, since it is already below the recommended minimum and where I was therefore experiencing slowdowns when passing through smoke or in the rain. Good point for the game however, the vast majority of the time, it was fluid even being under the minimum required for the processor. The performance problem on Windows was that the game crashed every other time when loading. 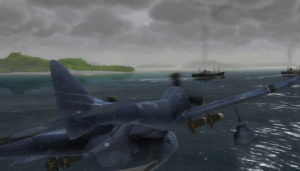 Regarding the gameplay suddenly with joystick, after a little adaptation time, the game is pleasant to play. It is not the most obvious since the aiming reticle is very small, which can sometimes seem like making fights last a bit for nothing. However, I think some will appreciate the difficulty.

The only negative point when it comes to driving: the laces. In piloting, there are three axes around which you orient your device. Wikipedia offers three small animations which perfectly illustrate the movement linked to each of the axes: from left to right, pitch, roll then yaw.

The axis of the laces is therefore supposed to make you turn right or left like a car would. Here the problem is that when you activate for example a yaw to the right, your device turns to the right while you press the button, but once it is released, it returns to its previous axis. The yaw angle is also limited to a few degrees and it appears that using a yaw also inflicts you roll.

To end on two positive notes before a summary in the form of a checklist, I would like to draw your attention to two points. The first concerns updates. Since its early access, the game has received several updates to improve graphics, performance and fix bugs. The game is therefore still evolving, we are therefore entitled to hope that it will soon be mature and that the negative points of this game (apart from the story, but for which it depends on everyone's taste) will have been improved!

Second positive note: personalization! Indeed the game can be personalized in several ways, a rare enough possibility to be noticed and encouraged. The first thing is the missions you can create, and the second is the paintings of the planes. It is possible to add paintings for airplanes, by following the tutorial available on the publisher's website. So if you want a pink plane with green dots, it's absolutely possible! It seems however that this possibility is currently only on Windows (impossible to locate the place where to place such files for the Mac version). 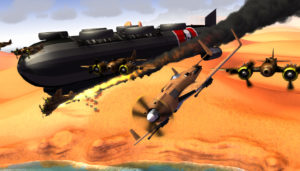 Add a comment from BOMB : Who let the dogfight ? – Aperçu