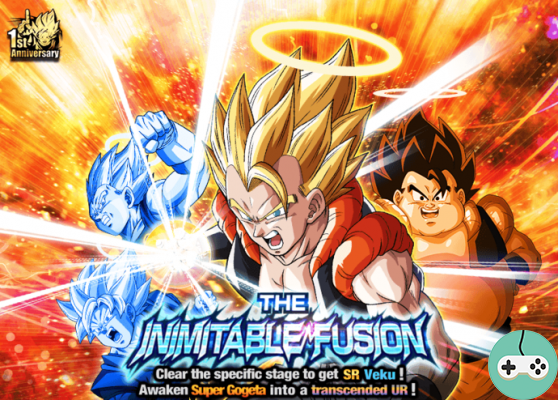 You know the power of Gogeta whether in the anime or even in game, you will now have to face him through the event of the supreme fusion to win his medals in order to transcend the power of it (evolution in TUR). This event is broken down into two levels where in the first you can recover Veku END and the second the medals to upgrade your Gogeta to TUR (10 medals are necessary). 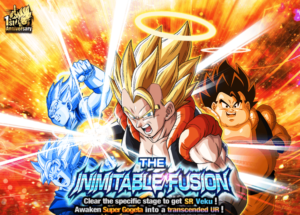 2. Birth of an invincible warrior

The real difficulty begins with this event where you will face Gogeta in two phases. The first will be to fight an Agility-type SSJ Angel Vegeta and a Technical-type SSJ Angel Goku before facing the Power-type Gogeta. The latter has 5 life bars in addition to inflicting a lot of damage and being able to attack several times per turn.

First of all, you should know that characters with the "Boss" link will inflict more damage than normal to Gogeta. However, there are several team solutions to complete this level. Regarding the items, you will probably have to take the Phantom Gatekeeper (attack delayed by one turn) as well as King Enma (damage reduction by 50% over 1 turn).

As Gogeta remains the main problem of the level, it is rather necessary to turn on characters of type Agility while keeping a good synergy of group so that this one passes quite often in special attack. As always, you will need to take a leader / friend giving KI +2/3. Gogeta remains a safe bet that will also help you quickly kill Goku Angel in the first fight.

In the Agility characters that can be effective in this event, there are for example:

The nuke is not complicated in itself but unfortunately you need the adapted characters which are only obtainable in the summoning portals mainly. Fortunately, you only need two characters to do this technique:

The second thing to take into account is that the items must be according to your team to make a single-color orb board (in the order to be used):

The "Stun" team will aim to continuously stun Gogeta so that he does not inflict any damage. This technique is completely subject to luck as stun is not 100% guaranteed. Here are some examples of stunners for the event:

It will be necessary to think well that your characters leave well in special to activate their capacity of stun. It is therefore always best to take a leader / friend who confers KI for the whole team.

Good luck to everyone in fighting Gogeta. Feel free to share your tips that have not been listed in this guide.