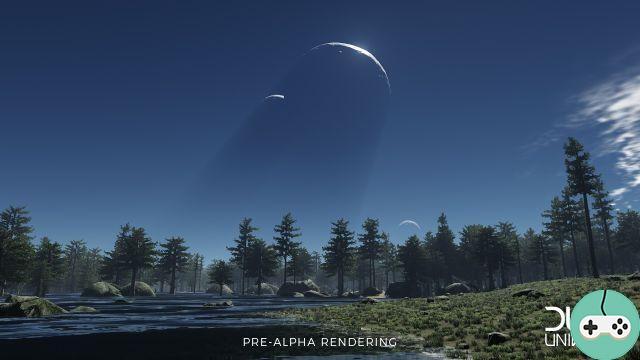 A few days before the launch of Alpha 2 of Dual Universe, I had the opportunity to discuss with Olivier Derache (Marketing & PR Manager) and Guillaume Gris (Lead World Team) from the Novaquark studio who demonstrated to me added content. Note that, subsequently, I was able to play on the alpha by myself as a player, having pledged on Kickstarter during the campaign, but an NDA is in place, so you will not get a catch screen or real feedback from me (for the moment). I will however allow myself to slip here and there some very brief personal opinions of the things presented during the demo, because it is difficult for me to make the difference now between things seen and things lived.

We did not come back much to the game itself, because I had already had a general pitch during the alpha 1. I invite you to do the same and to reread my article that you can find here. If you don't feel like doing it (I recommend it though), a quick description:

Dual Universe (DU) is a large-scale, massively multiplayer sci-fi game delivered to players as a single server shared by all, with a voxel-based world. 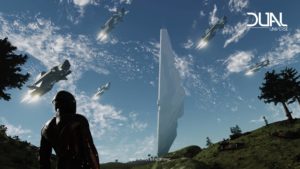 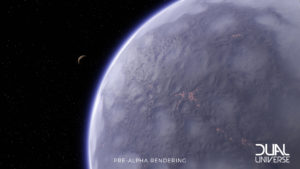 Without a fight, Alpha 2 remains very focused oncrafts and construction, but it's only a matter of time before PvP is implemented (logically it will be for Alpha 3 at the end of 2019). With l'industrialization, the craftsmen can build machines, on the model of Satisfactory or Factorio. Each has an inlet and outlet to be cascaded or connected to containers, with the aim of creating a complete production chain that transforms raw materials into finished products. Having played a lot of Satisfactory recently, I have clearly seen the inspiration and the developers are embracing it, while also being aware of their own limitations imposed by the multiplayer aspect of DU. I did however note two cool features that don't exist in the single player game (much to my regret): 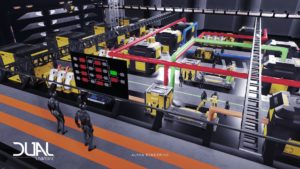 Le talent system awakens in me a nostalgia for Star Wars Galaxies ... even if other players will think of EVE Online. As a reminder, there is no class in DU, each player chooses what he wants to do, with the freedom to change orientation at any time without having to recreate a character. Talents are categorized into tiers and come up with a queue system that continues even after the character is disconnected. If this happens while logged in, an in-game alert announces the end, while the next talent is already starting to be learned. This great freedom unfortunately comes with its counterpart: the system remains rather obscure and I admit that the list seems a little too “crude” to me to properly measure the impact of the improvements with too brief descriptions. But that interface (which you can see in the blog post here) is only temporary, and Novaquark is working on improving it for future iterations. 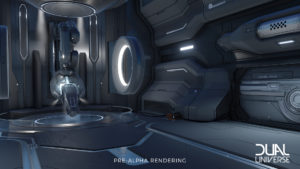 Once again, I had the opportunity to witness the ingenuity of the players and to visit some of the most beautiful vessels created as part of a contest organized by the studio during the previous testing phase. The models presented are impressive in terms of realism and ingenuity, combining the useful with the pleasant, with the cockpit and the living spaces of the crew. I find these achievements all the more bluffing as these vessels are all capable of taking off, equipped with engines sized to tear themselves away from the attraction of the planet. Moreover, in this regard, in order to make take-off easier, ships can now be equipped with rocket boosters, large engines with the sole purpose of fighting against gravity.

A lot of work has been done on the steering, both ships and vehicles. Novaquark demonstrated it to me by piloting a hovercraft, a fast ground vehicle that is given after a few minutes of play (an accessibility wanted to bring friends closer). In Alpha 1, players found the inertia too strong, which made control tricky. In this alpha 2, everything is better balanced without making piloting too easy: players must be able to make it a real specialty. Indeed, even if training is clearly needed, it is fairly quickly manageable, in any case at low speed and if one does not seek great precision in the movements. In fact, you have to forget all its habits and the arcade-style controls of most games where vehicles stop dead when the brake is pressed. Here, the hovercraft "floats" a few centimeters above the surface. A bit like a boat, you don't have to press the brake to stop, but reverse the thrust, until you slow down enough to lower the hovercraft to the ground ... but not too much or the hovercraft backs up and leaves in "crab". For the ships, I was able to observe during the demo the magnificent landing made by Guillaume. According to him, the ships now have better lift thanks to the improved aerodynamics of the wings, which changes everything. 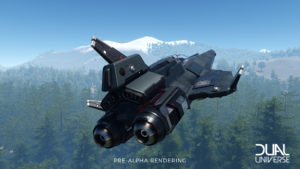 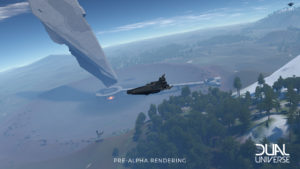 Landing which incidentally took place ... on a space station !! Small exclusivity for us, because the stations have not been officially announced by Novaquark, a surprise bonus not listed in the studio's roadmap. The interior is similar to that of ships or houses on the planet, using the same building bricks, but with a view that is so much more unusual. The stations are presented to me as relays. In the idea, players will now be able to create shuttles to make the round trip between the surface and the space station, and directly design the largest ships in space without having to constrain themselves because of gravitational forces.

From space, I therefore admire the planet through the large windows. Her surface has been enlarged: it is 4 times larger than in alpha 1, reaching the size of England. While discussing with the developers, I ask myself the question of waste. Novaquark is already thinking of solutions internally, and in particular speaks to me about a profession of waste picker. Abandoned items could become usable again after a reasonable amount of time, giving interested players the opportunity to use abandoned wrecks to remove them from the landscape. It would be a shame for pollution to set in. 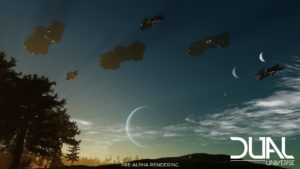 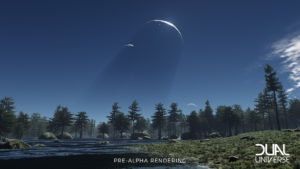 Finally, the presentation ends with the discovery of some notable graphics improvements : 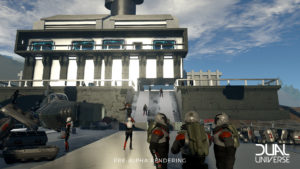 To conclude, Dual Universe only surprises me with its ingenuity. I was already conquered during alpha 1, I am even more so with alpha 2 that I discovered as a simple player. I look forward to being able to get my hands on the final game and to be able to invest myself further. I can already see myself creating a small outpost on one of the neutral moons, with my rocket-equipped ship that would allow me to reach one of the orbital stations, from where I could join the crew of a spaceship. to go on an adventure in this vast universe. If you also want to participate in the alpha, it will cost you € 60 for the basic pack and a new 48 hour session will start on July 25 at 16 p.m. Or if not, you can wait a short year or so for the beta and more accessible packs to launch!