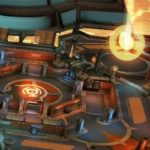 Headquarters Domination game mode, the Arkashan Arena has several classic elements, which can be found in other MOBAs. The difference is that the victory is progressive and that in addition to the points to be captured for the victory, there are points for the gain of credits. The map is practicable for teams ranging from 3 to 5 players.

The Arena of Arkashan is a symmetrical map, consisting of a massive level including team bases and victory points, and a small platform accommodating a credit point. Knowing this card allows you to chain your moves to permanently have more points captured than the other team. 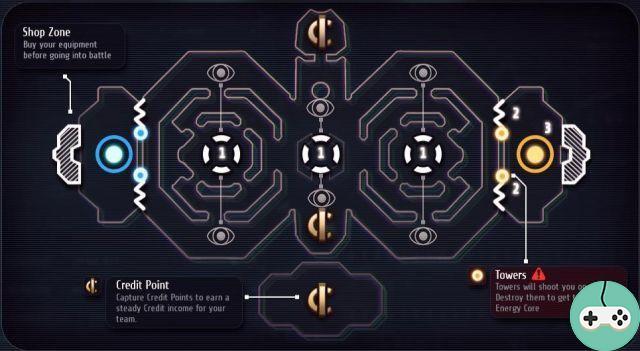 On either side of the map, we find in bleu et orange the bases of each team, each composed of a spawn point / store, a Core, two turrets protected by a shield. On the same line as the Core, there are three Victory Points: by capturing them, you lower the force field protecting the enemy base and you get more visibility (the eye-shaped icons on the map). In the center and on the same latitude, there are three Credit Points: by capturing them, you increase the credit gain for your team.

The card is equipped with two teleporters next to the external victory points (those close to the bases). They allow you to be very mobile and sometimes to sow your opponents. The other use of these teleporters is to be able to stretch ambushes but do not forget that the adversaries can lay traps for you in their turn.

A rather common mistake is to want to break the defense towers and the Core at all costs. Since towers deal a lot of damage, it's easy for the opposing team to defend them with one or two players. During this time, others can capture victory points and return to the game. No precipitation so but a control of the game! The best thing to do is send two people to slowly destroy the turrets while the others defend the points.

Do not neglect the credit points because they bring a significant bonus of currency to improve your equipment and gain the upper hand over the team opposite.

Do you want to be up to date and know all the tricks for your video games? In gamesmanagers.com we enjoy playing as much as you do and for that reason we offer you the best tricks, secrets or tips for you to play non-stop. We offer you quality content and always updated to keep you up to date. That's why, in our website, you will find not only videogame guides but also tricks, secrets and thousands of tips so you can play to the limit. Are you ready to get it? Enter now and enjoy your videogame!
ESO Update 6 Guide - Judicial System ❯

Ragnarök Online Revo-Classique - Back to the roots of Poring

The Mighty Quest for Epic Loot - Loot on mobile too!

Add a comment from Games of Glory - Guide: Arène d'Arkashan