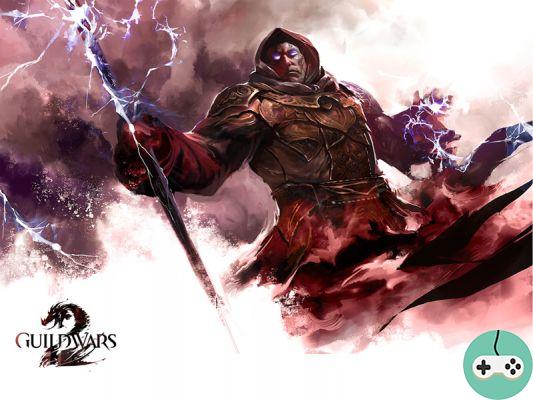 Here is Nicou's guide based on the melee elementalist. Mobility, burst, criticism, resistance, anti-conditions everything is there!

This very offensive build does not forget that in melee, a fabric is easily cut. So here is why I reinforced it in the earth with some extra skills.
Good reading!

The Fire, Air, Earth elementalist with double daggers
A master of the four elements, capable of unleashing lightning on enemies while supporting allies with a regenerating downpour, the Elementalist is extremely versatile on the battlefield. Earthquakes and firestorms accompany him as he climbs into battle, but this powerful mage also knows how to defend and support his companions in many ways. At any time, the elementalist can tune with a new element and thus adapt his fighting style to each situation. Elementalist gameplay is characterized by his mastery of four elements primordial: fire, water, air and earth. Each element has a different skill set and style of play. Despite his many defensive skills, the Elementalist remains a caster to theLight Armor who prefers to specialize in the power of their spells. The richness of its gameplay lies in its ability to change elemental affinity to adapt to combat and take advantage of a wider range of skills. You will therefore have 4 affinities with the elements:

The four elemental affinities are accessible using the F1 to F4 keys and are arranged above the weapon skills. The Elementalist can switch from one to the other very quickly in order to adapt to a given situation. When changing affinity, all five weapon skills are changed depending on the item chosen. The previous affinity recharges and will be unusable for about fifteen seconds. An elementalist can therefore frequently change affinity in order to access a varied range of skills. His skills will allow him to remain very versatile or, on the contrary, to prefer to specialize in one or two elements that he will master brilliantly.

The activation of each affinity triggers an effect of its own around the elementalist. It is important not to forget this : SKILLS For the explanation of skills: 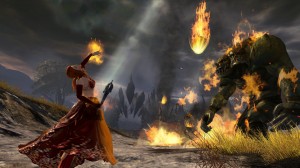 GAMEPLAY The change in affinity is very important. Switch as soon as you feel it's the right time. You will master it little by little.

For a small example of a fight against a target:

Let's say I start with the earth. The enemy will swing me, by logic, his most powerful spells. Your additional armor and resistance will take the brunt of the damage. During this time you use "magnetic catch" to attract it to you then in the order "Earthquake" -> "Earth upheaval" -> "Ring of earth". If he still hits too hard for you, stay in earth affinity and apply more bleeds to him before using "magnetic grip" and / or "earthquake" again. He will be knocked down and you can heal yourself a bit. Otherwise, immediately take out the heavy artillery in fire affinity. He still has a lot of bleeding, take the opportunity to add more burns. "Searing Velocity" -> "Ring of Fire" -> "Drake Breath" -> "Grip of Fire". Go directly to the air and follow with "Lightning caress" which will leave him vulnerable -> "Shock aura" to stun him -> "Ascending current" to throw him away -> and run immediately towards him thanks to "Ride the lightning". Come back with earth and reapply your bleeds, stun it, lure it, hit it, bite it! ?

I forgot! If the going gets tough take out your Earth Armor and Earth Shield Conjuring.

Armed with earth shield, you can use magnetic force to attract opponents to you, create an impassable rampart, or give shield blows and throw it at enemies.


It was a small example to show that in combat you have to change your affinities often. Also, don't forget to move around a lot, dodge and move around while hitting thanks to your special bonus. What we are looking for: Control the target's movements and stun it, throw it, jump on it, inflict the maximum amount of bleeding and burns. What we want is to wander the enemy and impose his rhythm on him. Always move around and pay attention to your cooldowns. The Elementalist leaves no chance for error. Equipment: Thanks to this build, you will have to seek the points of life, the armor you will have what it takes in earth, skills and the conjuration of the shield of earth. So look for health points, power and a good critical ratio. CARE - UTILITY - ELITE SKILLS Care: So I took the aura of restoration. We gain life every time we cast a spell. You have to strike constantly so obviously your regeneration of life through this care will be felt. not enough regen life? use the spell to regain more health. Utility: A fire seal to improve the critical hit proc and inflict a burn on the enemy (Good idea! We full burn the enemy and we add this seal before using the "fist grip" ... Ouuuh cha must sting!) || Earth armor grants protection (-33% damage) and stability (cannot be knocked down) || The earth shield conjuration as written above, sisi, look up a bit? Elite: A conspiracy of swordfish MWAHAHAHAH ... Well that's enough to scare the opponent! You have new spells during this conjuration. You summon one in your hands and one on the ground like each summons. As shown in the image below, you will have new spells: 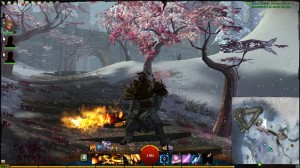 
Thanks for reading me, feel free to comment if you read everything correctly.