GW2 - General presentation of the WvW

Le World vs. World (also known as World versus World, WvW, WvWvW, World PvP, and McM) is a Player versus Player game mode where three servers (or worlds), compete for rewards or resources that grant benefits to their server. The maps are very large and accommodate hundreds of players of all skill levels who can participate at any time.

WvW is designed as a form of casual PvP, to be an intermediary between PvP and structured PvE. The idea is that players of any level or experience in PvP not only participate, but also have an impact on the way they play. 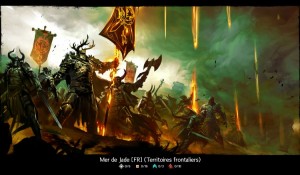 The WvW takes place in the Mists, a proto-reality between worlds and realms such as Tyria. This type of game is immediately accessible from the creation of the character. Players who enter WvW come with their own equipment and skills but the level is adjusted to 80 automatically.

In terms of number of participants, battlegrounds are limited to a few hundred players each. If a battlefield is full, a player wishing to join it will be offered to be queued to enter as soon as a place becomes available. Players playing as a guest on a server other than their world cannot participate in WvW. In addition, after a change of home world, a player will not be able to participate in the WvW for a while. 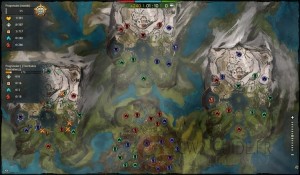 Entrance to the WvW is via Lion's Arch through Asura portals as well as through the tower icon at the top of the UI.

The map is broken down into four parts. Three zones controlled respectively by the three servers and an initially neutral central map (The Eternal Battlefields). When you enter one of these maps, you land in a secure area. Each waypoint includes a set of NPCs where players can repair equipment, sell or buy weapons or armor, and siege weapons. This is where you will start your fight to conquer as many territories as possible. Alone, in a small group or en masse, the World vs. World offers you different objectives and accessible to your style of play.

The main objective of World vs. World is to have the highest score at the end of the two weeks of combat. Every 5 minutes, your server earns points based on your achieved goals. A ranking of the victorious servers will serve to balance the clashes for the next few weeks, pitting evenly matched servers against each other. 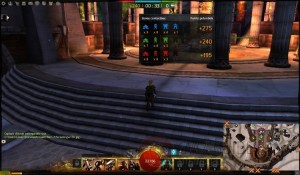 Each map is filled with various resources and objectives. Resource camps, defense towers, the fortresses et the castles are respectively 5, 10, 25 et 50 points. These sites, along with their capture and defense management, allow teams of different sizes to always find a way to participate effectively. While larger groups or guilds can protect main points, lone players or small groups can intercept caravans of resources, weaken opponents' defenses, or capture objectives, preventing the call for reinforcements. The maps are also populated with defending NPCs who enliven the gameplay. Here the Hyleks can help you on your missions if they are on your side. 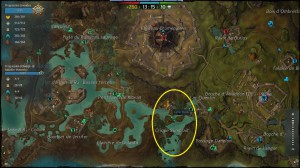 To aid you in your task, resource buildings such as sawmills or mines allow you to rebuild walls and build siege weapons to better besiege enemy strongholds while providing effective protection. Of course, you also need to protect the Supply Caravans if you want the resources to arrive safely and in one piece. This system is similar to the dynamic events of PvE mode and also brings its share of PnJs (Non-Player Characters) to support you in your most diverse tasks. 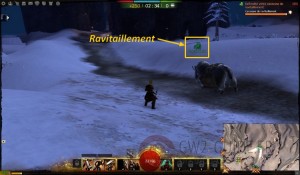 So you have to face the bulk of the opponents and cross their ranks to attack their main base. In the end, it is extremely difficult to break through enemy defenses, but nothing prevents you from forming temporary alliances between two servers to crush the third, even if you can be subject to possible betrayals. These are the risks of war! Here you will be able to see your base from the central map. Each of your bases contains NPCs repairing armor, merchants of all kinds, sometimes NPCs of trades. On this central base, we even have teleporters! 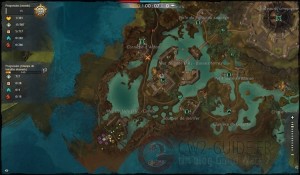 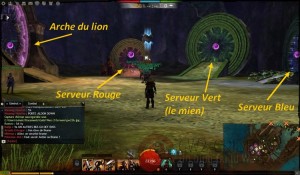 The objectives are multiple and require a different approach for each of them. Capturing a fortress is not an easy task, the World against the World has elements that facilitate the taking of a castle or, on the contrary, strengthen a strategic position. This is the case with siege engines. A supply system is also required for the construction of these death gear and a leader system is implemented in the game to facilitate effective squad formation. 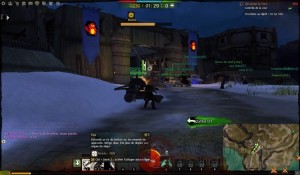 Siege weapons are environmental weapons that can be built for a specific purpose. Each weapon has its specificity.
To create a siege weapon, a player uses a template, either purchased from a merchant or obtained from loot. Construction is carried out using supplies spent by players. Thus, everyone can participate in the construction of the fortifications to speed up the process. Once construction is complete, the siege weapon can be used. There are three types of siege weapons, simple, superior, and guild siege weapons. The higher version is an improvement of the simple version, it has more health points and deals more damage. Guild siege weapons, on the other hand, have a lower supply cost. 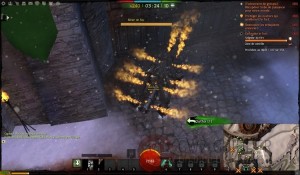 Additionally, defensive siege weapons can be built on walls to help defend and counter invading assaults. These siege weapons do not require blueprints, but a significant supply. 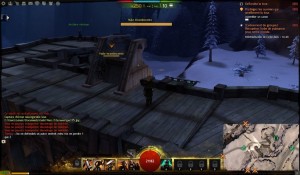 Siege engines have a construction cost. This cost is set at a supply point. Repairing a wall or a door also requires refueling. But what is this currency specific to the World against the World? 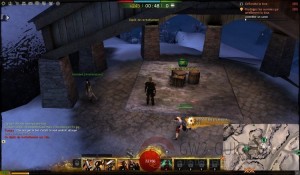 Resource camps, hidden in all maps, produce a resource called "Supply". Once in possession, these resource camps will regularly send caravans to supply Allied towers and fortresses. It is therefore important to always have them, and even to defend them. These camps are prime targets.
The caravans deposit an amount of supplies directly in your towers or fortresses. You can then draw this resource directly from your foundations. If there are no more provisions in your depots, consider escorting a caravan so that it can deliver its cargo safely.
Unfortunately, each player cannot carry more than 10 of this resource, which is nowhere near enough for building siege engines. This is why it is necessary to put in several.

In every infrastructure you own, it is possible to increase defensive efficiency. For a cost in gold as well as a certain dose of supply, two types of improvement are proposed to you. So-called "construction" upgrades and "militia" upgrades.

Towers and Fortresses have both types of upgrades while the more fragile Resource Camps only provide access to Militia upgrades.

Here, the system of doors in order to pass "through a wall" ally: this is called a postern. 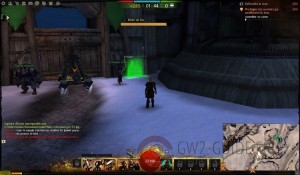 By killing enemies, destroying siege weapons or taking objectives, you get World experience which allows you to earn WvW ranks. When you move up a rank, you gain a world ability point which is used to purchase passive skills. You can find them all in the 3rd tab of the WvW window. 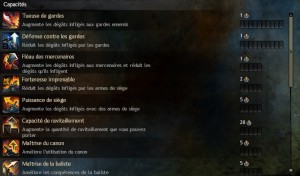 The abilities offer bonuses for the use of siege weapons, the use of supply etc ... These abilities have several levels which bring various effects, for example a person who masters the catapult will be able to inflict more damage to the walls or create a protective bubble that destroys projectiles.

A battle is coming? Are you going to storm a fortress or, on the contrary, defend the enemy waves? Help yourself to mercenaries! In each zone you have mercenary camps where fighters of the minor races of Tyria stay. These mercenaries should be ready to help you if you conceive of helping them in return. Helping a group of ogres against the relentless onslaught of harpies means securing new allies in the next battle around!

Here we were attacking a fortress but it went badly ... What if the next time we made the mercenaries pass in front? 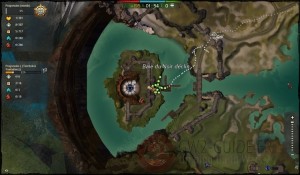 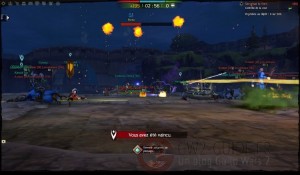 To ensure perfect coordination between players, Guild Wars 2 offers an ingenious system. Jordan Massey, a gameplay programmer on the WvW, talks about it:

A squad is a pyramid structure, with a commander at the top, and his companions below him. Each squad receives its own chat channel, which all members can see, but which only accepts chats from the commander.

Additionally, commanders gain access to a small set of squad map markers (features for making scouting for your squad on the map). All squad members will see these markers on their maps and compasses. They will represent orders like "attack", "defend", "join" and "bring resources".

Joining a squad is as easy as sending a group message or invitation. Select only one teammate and if he is in a squad, you will be able to see an option that will allow you to join.

You also have the option of creating one. Creating a squad will make you become a commander. You will receive these famous options for markers, and you will have an icon above your head indicating to the team members around that you are a commander. It's nice to strut around with your special icon, but you also have a big responsibility. The right to become a commander is earned.

In each starting area of ​​the map, and in major cities, there is a Master Strategist merchant. For a hefty sum of gold, you can purchase a book that will grant you the right to become a commander after reading. This is a permanent right, so the manual will only need to be purchased once for each character. The heavy cost in gold is in place because we want to discourage people who are not really interested in being a leader on a battlefield by becoming a commander. This cost also ensures that every Commander you see will know the game well. We have decided that this gold should be a more suitable solution for this than a player's level, as experienced players who start a new character will always have the money required to purchase the manual.

During your battles in World against World, you have a chance to find objects of all kinds on the corpses of your freshly slaughtered enemies. Ranging from simple equipment to construction blueprints for siege weapons.
You also gain experience, so you can ride your character entirely in World vs. World.
And to top it all off, capturing strategic position points offers a bonus to the entire server! Increased regeneration, increased chance of getting magical items, or greater gold gain, these are the kinds of rewards you can give your server in World vs.World!

Hey, by the way, I heard that there was a secret chest, well hidden around here ... Have a good harvest and have fun in WvW! 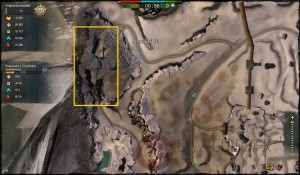 Do you want to be up to date and know all the tricks for your video games? In gamesmanagers.com we enjoy playing as much as you do and for that reason we offer you the best tricks, secrets or tips for you to play non-stop. We offer you quality content and always updated to keep you up to date. That's why, in our website, you will find not only videogame guides but also tricks, secrets and thousands of tips so you can play to the limit. Are you ready to get it? Enter now and enjoy your videogame!
Battlefront Beta Tips and Tricks ❯

Add a comment from GW2 - General presentation of the WvW