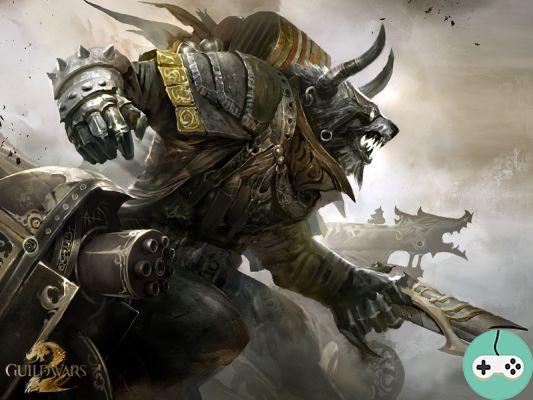 This engineer-based guide will introduce you to the joys of fire and treacherous attack!

Armed with a gun and a hyper-techlonog ... technoclo ... tech ... Hyper-developed shield! Let's venture together in the guide of the ingenious engineer! 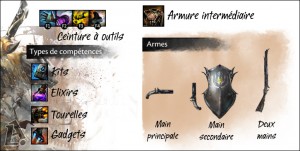 The designation Engineer is barely enough to show the combat approach capabilities of this class. At the same time tactician, alchemist and artilleryman, the Engineer is endowed with offensive and defensive capacities all as sophisticated as each other thanks to an impressive arsenal of weapons of all kinds. Thus he will know how to make himself useful whatever the situation. His dynamism and versatility make him an ally and a formidable enemy.

No need to look in his inventory: the engineer only hasonly one weapon set. And for good reason: the gameplay of the engineer is based on his ability to use a multitude of weapons and tools specific to his profession and accessible via his skills bar! With his middle armor and his bags full of weapons and inventions of all kinds, the engineer is an all-terrain profession, able to face all situations.
The engineer has the ability to customize your tool belt (skills F1 to F4). Each of them depends on the utility skills that the engineer has chosen to equip. Thus, the equipped healing skill determines the F1 skill; the 7th utility skill determines the F2 skill and so on. Each of the skills of the belt being specific to the equipped utility skill, the engineer has a wide range of combinations. 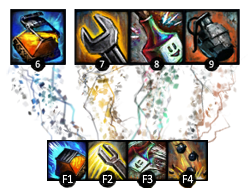 Most of the skills of the tool belt are complementary skills of the object equipped with utility bar. For example, by equipping an elixir, the engineer will not only be able to drink it (and thus benefit from its effects) but he will also be able to throw it on the ground and thus create an area of ​​effect using the F skill of his belt. Only the turrets and the mine kit are an exception to this rule since the belt can trigger their destruction.

SKILLS For the explanation of skills:

The engineer has a belt with a lot of tools, let's use them!
Here you can swing the elixir H where you want and get up to 2 treatments + 2 random bonuses! (the skill of care + the H elixir of the belt to throw on the ground). Convenient.
For incendiary ammunition, our next 3 attacks inflict burn, that's good, condition damage is increased thanks to our special
Up to 5 mines can be placed where you want and detonate in the order you want, when you want ... Or blow everything up at the same time! Mines are invisible out of combat and remove bonuses from enemies that detonate them thanks to our specialization.
And finally, we can detonate our flamethrower turret.
Not to mention that we have our flamethrower on the back:

For an example of combat, you can place the mines in front of a door as well as the flame thrower turret on one side of the door, facing the opening thereof.
When an enemy passes Boom, everything is blown up and the flamethrower turret is activated. The enemy thinks we are on this side. Here you go into action from the other side, sending out the poisoned "volley of arrows". These arrows decrease the amount of healing an enemy can heal. In view of the basic burst, he will surely want to heal himself right away.
Continue to shoot while getting closer to him, put the 5 bleeds on him then use your shield to push him away, knock him out ... whatever you want.
If it's within range, pull out your flamethrower and put the abilities it offers to good use.
Do not forget especially your elite elixir X spell which is very important in a fight.

Also, don't forget to move around a lot, to dodge. What we are looking for: Scare the enemy with our burst of damage, the loss of their bonuses and our shield protections. When he sees the flamethrower he will be afraid of its heavy damage. If it leaks, pull it to keep it away (if it gets too close, pull the shield out). If it approaches, push it back a bit. Equipment: With this build, you will be able to focus on pure power, nothing but power. Don't forget a bit of Vitality and Critical Hit though. CARE - UTILITY - ELITE SKILLS Care: Elixir H with its nice care and bonus. Abuse in order to benefit from a maximum of bonus! The elixir tool H is added to the one already in place. What? Yes yes, in fact you have two direct healing spells. Utility: The flamethrower, very practical at medium-short range especially. Very large damage and burns. These burns are maximized by your special condition increase. || Mines are very useful for setting up ambushes, abuse them! || The flamethrower turret, for even more burns! You can even detonate it. Elite: Elixir H ... Have you ever dreamed of becoming the Hulk? With this, it is possible! You become a Raging Brute, Withering Plague, or Furious Tornado: 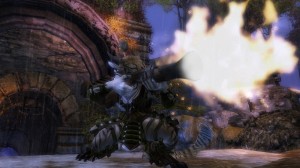 Thanks for reading me, feel free to comment if you read everything correctly! ?

Add a comment from GW2 - Pistol-Shield Engineer - PvP and PvE