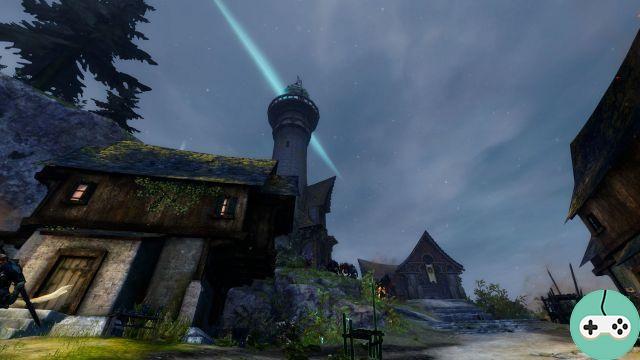 A week ago, on a private test server, I had the opportunity to discover episode 3 of The Frost Epic in the company of fifteen international journalists and ArenaNet developers: Kirk Williford (Episode 3 Team Lead), Novera King (Narrative Lead) and Justin Reilly (Senior Designer). We all ended up in Base Camp on Bruinewood Coast, the new area of ​​this Guild Wars 2 Living World episode. 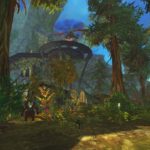 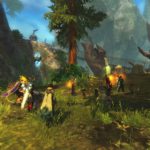 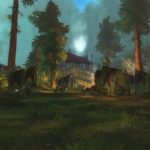 Before getting down to business, our guide started playing dead, not to avoid us but to show us this new emote that is activated with the command / death kill. A priori, there will be situations in which it will be very useful to be able to make the carpet on the ground but we did not have more details. 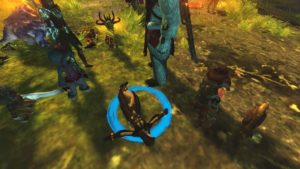 He then showed us some of the new equipment, but it was not easy to see properly as everyone was crowding around his character! Note two new weapon sets and a four piece armor set inspired by the ceremonial dress of the Bear Norn Shamans. 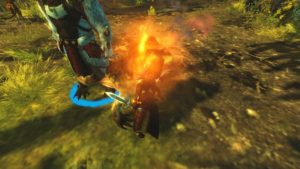 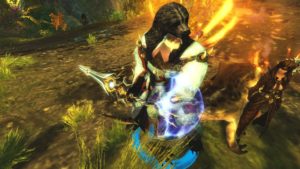 Civil war broke out among the Charr and it is up to us to intervene in the midst of a terrible conflict between members of the same family. As for the story, the writers really wanted to insist on the consequences of the war, of which no camp will emerge intact. Map exclusively PvE, the Coast of Bruinebois is the main center of this confrontation.

We are unfortunately on the losing side, called on to the scene in the hope of successfully reversing the trend after refusing a ridiculous surrender proposal on unacceptable terms. The first step is to take control of bases to increase the readiness of the troops. Just like in PvP, a base can be retaken by the enemy at any time, defense being as important as attack. Every 10 minutes, the game assesses the status of the six captureable bases: Vlox Mine, Fort Defiance, Plumbed Village, Wolf's Cross, Cascadia Port, and Petraj Lookout. If things turn out in our favor, then that triggers the finale.

The card has two lines with 3 bases on each side. If you know, it reminded me of the Warfronts of World of Warcraft. The left side advances through relatively populated forests and mountains, in an offensive led by Crecia and Malice Shadowsword of the Ash Legion. The right side takes to the beach, with more direct conflicts led by Efram Glorybringer of the Flame Legion and Smodur the Impassible of the Iron Legion. 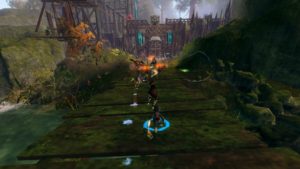 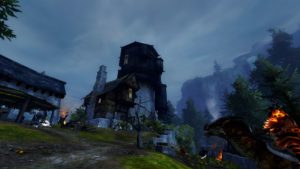 Our guide took us to the right to attack the gate of Petraj Belvedere, which requires the use of siege weapons (catapult, ballista, arrow chariot, and fire ram), very similar to what is used in World against World. Once there, we did everything to reduce the enemy influence, destroying the barricades and pushing back the reinforcements, until attracting the attention of the commander, a mini-boss to take down to take the final control.

Once the loot is collected, things do not end there, as it is necessary to maintain the morale of the troops to limit the risks of suffering an enemy siege in retaliation. This bar starts very low, preventing the immediate rush from base to base. It fills up by participating in the life of the base: repairing the infrastructure, feeding the soldiers, treating the sick ... It costs war supplies which are not infinite, so it remains to be hoped that the players will come with a minimum of equipment. . There are also events in the area that trigger on a fairly regular basis and provide a good morale boost if successful. We had to protect the belvedere against enemy mortar fire. 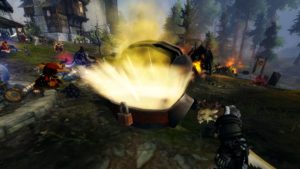 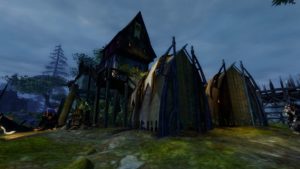 We did all of these tasks for a while and then the developers cheated, in order to give us illegal control of five other bases and to jump straight to the conclusion. Either way, there weren't enough of us and too inexperienced to manage to get out of it. But, clearly, except maybe in the early days if there are whole buses of motivated players, it probably won't be a map whose events will settle in 10 minutes. I think it will take at least three to four evaluations.

The final confrontation, which takes place towards the Point of the lighthouse (in the northeast), begins with the escort of Efram then of Malice, until a completely burnt area. It seemed that the fight was going on in parallel in a second place, but our guide took care of the second row himself, so I couldn't really see what was going on there. . It must be said that I was already quite busy trying to survive, between the hordes of enemies, mini-bosses, and destructive machines, all under the watchful eye of snipers who force to break the lines of sight. so as not to be shot. The objective is to take down Ranoah and Vishen Steele's modified Devourer TT6-B. The first is a big tank, the second is a sniper who creates copies of herself, forcing her to find solutions to detect where she really is. Once the two are on the ground, Nicabar finally arrives in a helicopter, an enraged version of everything that happened before. 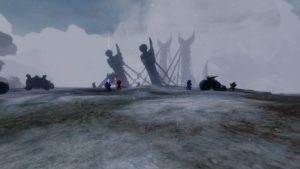 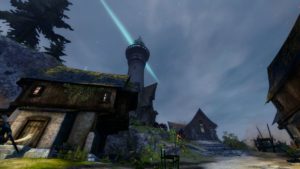 Fortunately, once again, we were able to count on the involvement of the developers to bring us back to life and take down the bosses at 5% per hit by cheating shamefully. Among the gifts given as a reward, I notably noted the activation of successes: 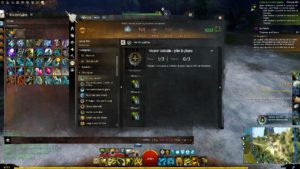 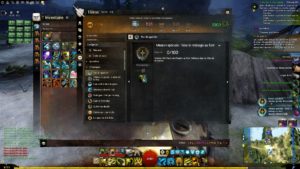 Two last points to finish on this area. The inspiration of World vs. World is very present in the mechanics and is also felt in the way information is given on the map, marking the borders of each region in the color of the faction that controls it. This is no coincidence: Bruinewood Coast was designed in the hope of attracting PvP players who may not be playing this style of purely PvE objectives, while quietly preparing PvE players for World vs. World gameplay. , in order that they feel better prepared for it. 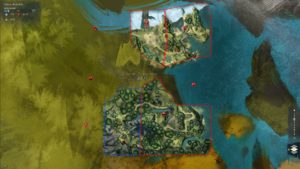 Also, I haven't talked about it yet but, to walk through the map, there are the classic waypoints, but especially the airdrops, perfect for seeing the map from the top. It costs a ridiculous amount of War Supplies, the same resources needed to repair buildings on a base and get the new mastery. 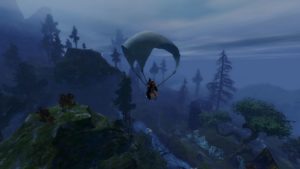 There are 3 new Masteries, allowing you to learn two new skills available on PvE maps: an Electro-Magnetic Pulse and a Remote Charge. These two skills are only recoverable on a United Nations drop table, against war supplies. 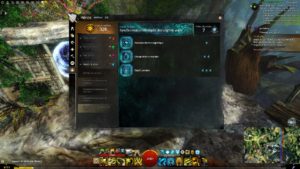 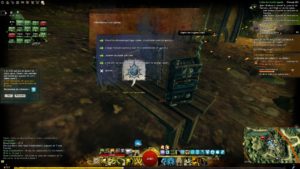 Finally, there is an essence system: enemies drop orbs of essence when dying (resilience, bravery or vigilance). After harvesting 30 charges, this activates powerful effects to be used against the opposing essence. A fourth level is added to each essence manipulation lane, which allows special action skills to be used on enemies regardless of their essence (but if it matches, the damage will be increased).

Our discovery ended on this instance, located just above the base camp, for 10 players. And it was a disaster! The bosses just ran over us. It must be said that the last one we tested has a series of particularly deadly abilities, spawning Charr that spin and tanks that crush everything in their path, not to mention its arrows that freeze all its targets causing them to die of suffocation if they do not come out not very quickly. I'm telling you, I risked my life for these photos! 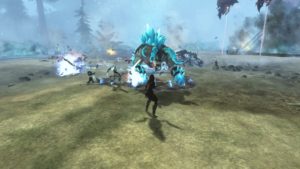 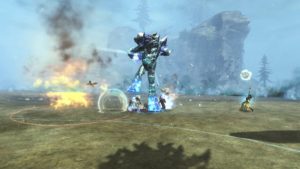 I'm not a regular Guild Wars 2 player, so it will be difficult for me to give my final opinion on this new chapter. All I could say is that I had a great time with the developers and my fellow journalists, discovering a very action-oriented episode, with epic encounters. As an MMORPG player, I'm just wondering about the overall difficulty which worries me a bit. When I see the lack of coordination that generally affects groups, I wonder if they will be able to move forward in a map that is proving to be particularly competitive. But the answer will come soon, with the episode coming out today.

Once is not custom, a small trailer to conclude on a musical note:


Do you want to be up to date and know all the tricks for your video games? In gamesmanagers.com we enjoy playing as much as you do and for that reason we offer you the best tricks, secrets or tips for you to play non-stop. We offer you quality content and always updated to keep you up to date. That's why, in our website, you will find not only videogame guides but also tricks, secrets and thousands of tips so you can play to the limit. Are you ready to get it? Enter now and enjoy your videogame!
GW2 - Season 1 Review: The Consequences of War ❯

Add a comment from GW2 - Preview of "No Quarter"