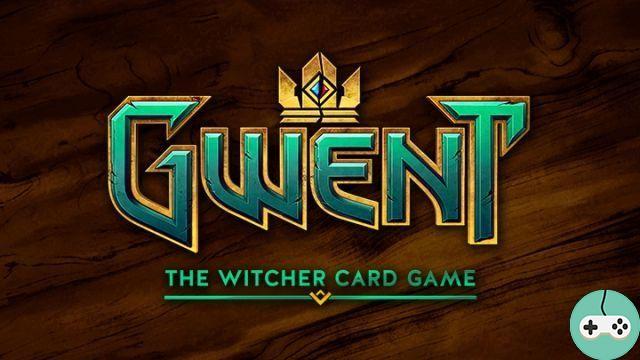 Gwent, this name is surely familiar to you if you have played the extremely excellent The Witcher 3: Wild Hunt. Indeed, Gwent was a mini card game with its own set of rules. The success with the community sparked the interest of Polish studio CD Projekt who set about developing the mini game into a full game! 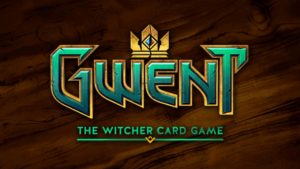 For several days, the game has been available in closed beta until its final release on PC, Xbox One and PS4 scheduled for spring 2017. We find a card game with a very classic base and similar to HearthStone in many ways, which makes it possible not to be totally lost. But it does have its own personal charm, and to better understand where I'm going with this, I'll start by talking about the system of cards, packs and decks.

There is a system similar to that of other games of the same style: the cards are unlocked in packs available in the store in exchange for 100 gold units or for real money. Gold can only be obtained by playing (well, by winning!). 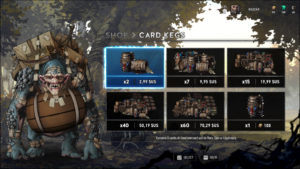 The little extra at this level is that when opening the deck we have four cards turned over and then, once the cards are turned over, we have three new cards that appear and you have to choose one of the three. It then happens to have a difficult choice to make but I find the original touch. 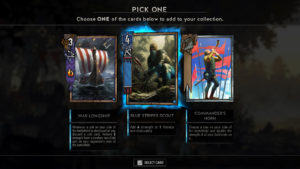 Here the choice was relatively easy!

Once the cards have been collected, all you have to do is make your deck! The basic system is simple but adapted to the rules of Gwent while allowing to keep a good balance in the game. Indeed, there are 3 categories of cards: Bronze, Silver and Gold. Obviously, a Gold card is more powerful than a bronze and, in addition, it resists most spells. In order to avoid creating decks that are too unbalanced, there are limitations: four gold and six silver cards. 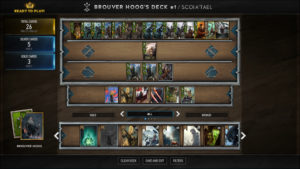 They are special all the more so as the types of cards are very diverse. To begin with, each participant has a minimum of 25 cards and a hero. Each hero has a unique ability (so far, it's okay, it's not too complicated!).

Then, each playable card on the board (which is not a spell) has strength points. These are essential because you ensure victory because, to win, you need more strength points than your opponent. 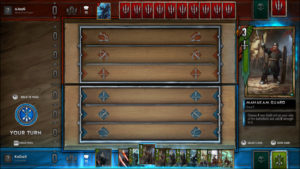 But it's not that simple because, in addition to the specific types of cards that we will discuss in a second step, you should know that between the first round and the second, you only get two cards. And between the second and the third (if there is a tie) only one. And you don't get any back between each card played! This means that each card present must be considered before being put down because you will need cards for the next round.

I haven't lost you, I hope? Because it's not over yet!

On the shelf in the photo below, you can see that there are three rows on either side. It represents the position of the map. Some cards are of the Melee, Distant or Artillery type, which corresponds to the different rows from top to bottom on the blue part of the board. Some have a fixed type but others are free to be placed wherever you want. 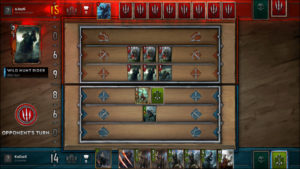 You will say to me then "But what does that change" and I will answer you "Wait it is still not finished!".

And yes because you have (or not, depending on your deck) spells applying Frost, Fog, Rain (or clear sky to reverse the effects of the previous ones). Each decreasing the strength of the units present in their respective rows ie Melee, Distant and Artillery to 1 except for the Gold cards (as I said above). This is an example of row-based spells, there are plenty more!

Now that you have the basics, we can finally talk about the different types of cards (specific to Gwent) to carry out your fight!

There are cards with different affixes that can turn the game around. For example, there is a type of card that has the ability to remain on the battlefield after the end of the round (often dwarves for that matter!). Usually, these cards have low strength points BUT, if you have a lot of cards in your deck to increase the strength of your unit, you will ensure victory in the round and most likely the next one because you will have already a card giving you a lot of strength points and the opponent will have to get rid of all his cards to win. And again, not sure that this is enough! 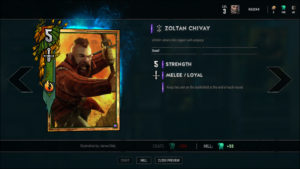 There are also cards that you play face down. As a result, your opponent does not know the card or its strength (moreover, the latter is only calculated at the end of the round). As a result, your opponent does not know how many strength points he must put on the board to win. The only flaw is that you have to plan your move because the cards must be turned over by an action specific to each card (playing a particular type of card, skipping the turn ...) but your opponent can also trigger them. and put your plan in the water! 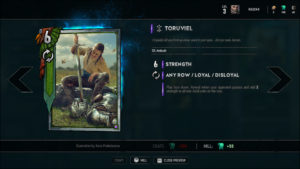 The last really specific type of card is what I would call traitorous cards. Indeed, when you play these last, they are placed in the opposing camp and thus give more points of force to your adversary. Obviously this is not the only function of this card otherwise they would have no use except shooting yourself in the foot! Indeed, they also trigger special abilities like drawing cards from your deck (something very useful in a game like this). They are difficult to play well because some have a lot of strength points. 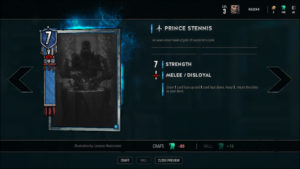 Here you are ready. But practice is still the best way to really understand everything! The game is currently in closed beta but is announced for 2017. It is also possible that a public beta and server testing will be offered before release.

And you, do you like to see this mini-game become a full-fledged game?