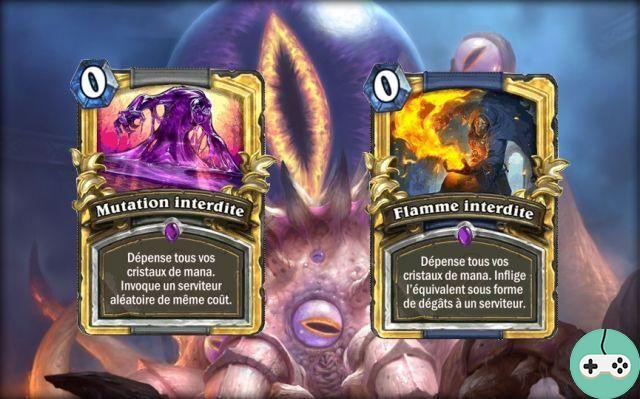 Still new cards revealed today, Blizzard has listened to the request of players who asked for legendary spells, it is a wish almost granted with the appearance of forbidden spells!

What are forbidden spells?

Forbidden spells are a new mechanic in Hearthstone, they are 0 mana spells but when playing them they use all of our crystals (ex: if you play a forbidden spell on turn 6, your 6 mana will be used) and an effect will result from the number of mana used. The later you use his spells, the more powerful they can be. Conversely, using them at the start of the game can also be very interesting. These spells are completely modular.

Here are the first two spells revealed, that of the mage and the priest:

Here is the spell of the mage, a spell which leaves rather dubious because it can be used only on a servant. You can imagine it in a frost deck but the frost has so many spells that I do not see the usefulness of the latter. In this case, you might as well use the Flame thrower (as a reminder: 5 mana, inflicts 8 points of damage to a servant) a rather average card for the mage.

Here is the priest's fate and what a fate! It spends all of your mana and summons a random minion of the same cost. Let's be clear, the spell is very profitable from 8 mana and more. 8 mana being the most profitable cost because it allows to summon Tyrion, Al'Akir, Chromaggus, Ragnaros, Gromash, the 8/8 taunt Druid. In other words, the very nice world that can change the game, the concern of this card is that it is not a threat if you do not have the advantage and does not allow you to return to the game so a card which is very powerful to finish the adversary if you have the advantage but average if on the contrary you are in a perilous situation.

So here is another very interesting and fun new mechanic, note that there will surely be one forbidden spell per class. Roll on to see all the effects of this new class of spells!