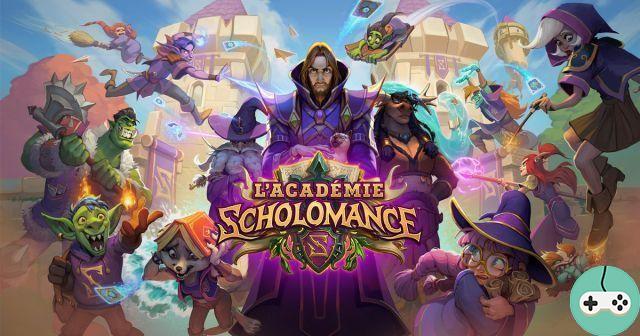 Released in March 2014, Blizzard's card game - inspired by the universe Warcraft - has carved out a good market share in the genre, by offering a game that is easy to access, but relatively complex to master. A formula that has attracted more than 100 million registered players (not to be confused with the number of active players, not communicated by Activision Blizzard, but which can be estimated at a few tens of millions, if we refer to the results of the first quarter of 2020) and which motivates the firm to maintain HearthStone, via multiple extensions.

It's been years since I played multi at HearthStone. I relaunched it occasionally when an Adventure popped up its nose - a "solo" format, which offers to face different bosses, from a dungeon / raid of WoW - by paying the requested amount in € (note that we can also unlock these adventures by paying 700 PO, the in-game currency that we get by completing quests), but with regard to the duel / arm aspect iron, I hadn't touched it easily for 3-4 years. The return was, however, less harsh than I thought. 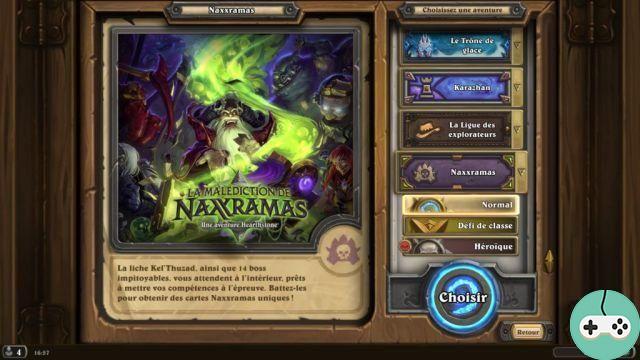 One of the game's earliest adventures

In order not to overwhelm newcomers and other ghosts, Blizzard proposes by default to use the base maps and that of the expansions of the last 2 years. Presented like this, it doesn't look like much, but it actually allows you to take or take back the title calmly, by limiting the learning to "only" 1500 cards, instead of 3000. For the nostalgic, the irvinois studio has thought of you by integrating a "Free" mode, allowing you to use all the cards available to date, as long as you have them.

To obtain the cards, this can be done in two distinct ways: either by opening packages, or by making the cards via the dedicated workshop. Depending on the rarity of the card (Common, Rare, Epic, Legendary), you will need to use a greater or lesser amount of Arcane Dust. To obtain this precious resource, you will have to disenchant cards that you don't need. Ideally the duplicates, and then you will have to sacrifice a few cards to be able to create the deck of your dreams. 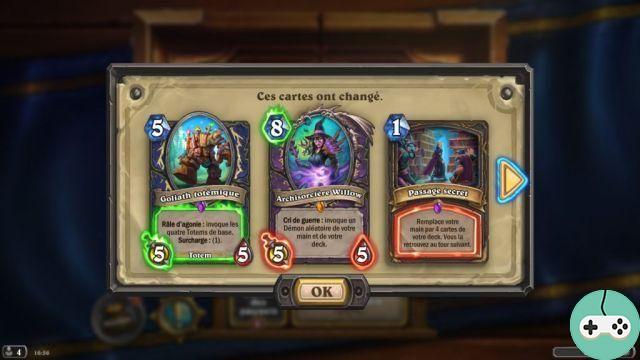 A small buff / nerf summary is available after each patch.

Thirty cards are needed to create a deck. You have the option to use the automatic deck-building system after choosing your class (each class has a special ability, a healing for the priest, a sacrifice of life points in exchange for a card for the warlock ...) if you want to avoid the "tedious" step of creating a deck. However, it is best to take the time to create a deck that you like and that is at least suited to the current meta of the game, otherwise you will suffer a lot of defeats ...

Once this step is completed, you can finally enjoy the title by starting a game, normal or ranked, at your convenience. The process is the same in both cases, with the difference that at the end of a ranked game, you will obtain a ranking rank which goes from Bronze 10 to Diamond 1. A Legend level still exists, following the system overhaul, but will be reserved for the gaming elite. 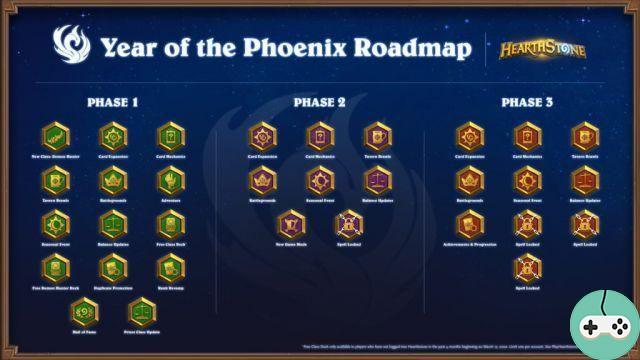 The course of a game follows a relatively classic pattern. You start with 30 health and a single mana crystal, and you gain one each turn. Most cards will consume more or less mana crystals. It will therefore be necessary to place his cards wisely, whether they are servants, enchantments or various spells, in order to bring down your opponent's life points to 0. No line of attack or defense here. The game is reduced to its simplest form. A confrontation line (two if we count that of the hero) is present, on which we will post characters with various capacities. Some will provoke the adversaries, in order to force the attack, others will be able to attack as soon as they are posed, or even cause an effect on the ground, on yourself or on your enemy.

For players looking for a little exoticism, you can try your hand at the showdown of the week, which changes the rules of the game and offers interesting challenges. At the time of writing, the arm wrestling proposes to replace the cost in crystals of the cards by a cost in life points ... Enough to considerably accelerate the duration of the games and redouble vigilance on the strategy to adopt, by creating a low-cost deck, for example! A battlefield mode is also present, and opposes you to 7 players, in semi-automatic mode. We recruit the servants, we place them in the desired order, and everything is done automatically during the combat phase. Something to please auto-chess enthusiasts. 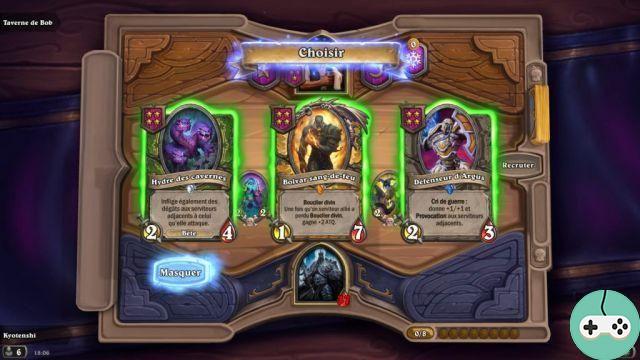 The "Battlefield" mode is done in 2 phases: Recruitment / Attack

Start Hearthstone in 2020, is it so delusional? From my point of view, not that much. Admittedly, the game is richer in 2020 than in 2014, it is a fact, and you will have to adapt to align yourself with the level of some old ones, but everything is done so that the learning curve is less steep than on other studio games (Overwatch in the lead, because of the smurfs) and so that you can have fun while playing. Be careful though, although the learning curve is fairly gentle, collecting cards can take a long time. If you focus on just one class (or two, thanks to cards adapted for multiple classes from the Scholomance Academy expansion), you should be able to play for free after a few weeks. On the other hand, if you want to take advantage of one deck per class, your quest will be long and tedious, unless you get your hand in the wallet and are lucky.

Do you want to be up to date and know all the tricks for your video games? In gamesmanagers.com we enjoy playing as much as you do and for that reason we offer you the best tricks, secrets or tips for you to play non-stop. We offer you quality content and always updated to keep you up to date. That's why, in our website, you will find not only videogame guides but also tricks, secrets and thousands of tips so you can play to the limit. Are you ready to get it? Enter now and enjoy your videogame!
FFXIV - Return # 23: Inventory, customization and servants ❯