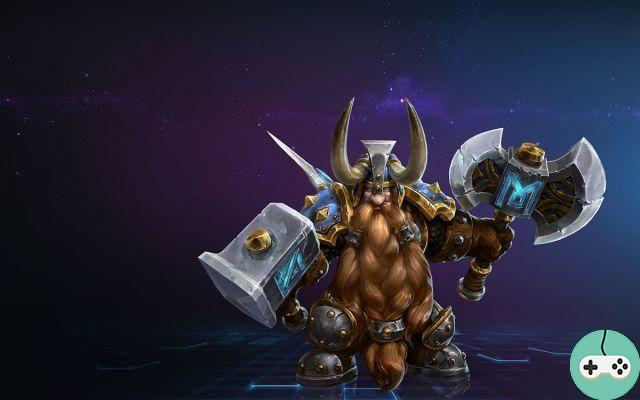 Muradin was an iconic character in the universe of Warcraft III: Frozen Throne, following Arthas to Northrend. Beer, steel, axes, name of a ram! We meet today for a guide on the King of the Mountain, Muradin Barbe-de-Bronze! 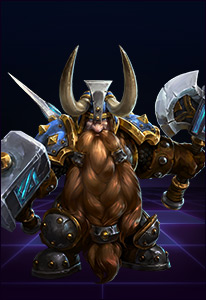 Formerly the guardian of Prince Arthas, Muradin could not prevent him from becoming the Lich King. After recovering from a slight amnesia, he is now the leader of the Bronzebeard clan since his brother King Magni's “diamondism” crisis. Small but strong, Muradin wields a hammer and an ax that he swirls in the fray much to the chagrin of your opponents. Excellent in the role of tank, its damage is not to be neglected, especially at the end of the game.

Second breath (Passive): Regenerates a moderate amount of health per second as soon as the hero goes 4 seconds without taking damage. When it has less than 40% health, the recovery is doubled.

Storm Bolt (A): Launches a hammer that deals moderate damage to the first enemy hit and stuns it for 1,5 seconds.

Dwarf Throw (E): Leap towards the target location and deal moderate damage to enemies in the area.

Uppercut Magistral (R): Stuns target enemy Hero and charges an uppercut that deals massive damage and knocks them down. Enemies in its path take moderate damage and are knocked back. 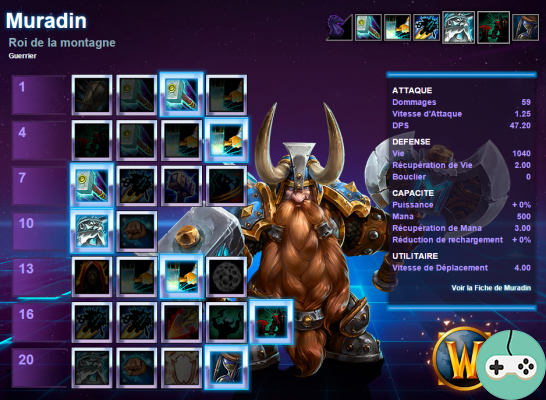 This build aims to maximize your controls, while keeping a good dose of resistance thanks to Avatar (R) and Stone Shape (D). The more opponents you will hit with Storm Bolt (A), the more your damage will increase. At the end of the game, with a minimum of stacks, you will be able to kill a carry on your own or at least damage it badly! Your opponents will learn to respect your wonderful beard. That's right, years of maintenance!

Ultimate Storm (A): The damageStorm Bolt (A) are permanently increased by 5 per enemy Hero hit.

Why? Thanks to this talent, your talents will very often be underestimated, especially at the end of the game. Very quickly you're going to end up with a decent, if not substantial damage bonus. Having no limit, try to strafe your opponents as much as possible with Storm Bolt (A) from the start of the game in order to become a real killing machine later!

Electrification (WITH) : Thunder clap (Z) Leaves a trail on the ground that explodes after 2 seconds, dealing 25 damage and slowing targets hit by 25% for 2,5 seconds.

Why? Very good talent for teamfight, especially in restricted areas. It adds an interesting dose of control to a spell that already is, and is also very useful for killing waves of minions more easily.

Why? Still checks, still checks! Except that there, finished laughing. You are a real distributor of slaps that knock you out. (And wait until you see Avatar (R) ...) Note also that if you hit two heroes with your Storm Bolt (A), you win two stacks of Ultimate Storm (TO) !

Why? No doubt: where Avatar (R) makes you more resilient, gives you a micro-stun on each of your auto attacks, increases your height to facilitate bodyblocking, Uppertcut Magistral (R) only gives you ... an opponent's move, not always as you would like.

Why? A good boost to our damage if we find ourselves in a one-on-one situation. At the end of the game, this talent is the secret to killing opposing carries in a full rotation of spells!

Why? We gain in survivability thanks to a powerful personal care, especially if we take into account the life points offered when we are in Avatar (R). An excellent talent then. We can also orient ourselves towards Intimidating presence when the opposing team is made up of many heroes based on basic attacks (Illidan, Raynor, Valla ...).

Why? The talent Quick return allows us to double our controls, but also our damage! The ability to immobilize a target for that long is really great, but best of all, you can take out just about any fragile target with your doubled spells and the damage you're capable of taking out. 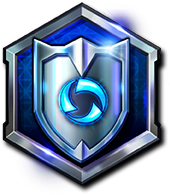 The role of warrior is quite complex to grasp, because you will need to know when to annoy fragile enemy heroes and when to babysit yours. Muradin is able at the end of the game to kill an opposing carry very quickly, you should not hesitate to jump on them and make life difficult for them. When you have got rid of this Jaina or Kael'Thas, come back to Avatar (R) towards your team in order to annoy opponents as much as possible. Indeed, the stun that brings your ultimate is extremely annoying for the adversary. Also, your immense size makes it easier to bodyblock your opponents. Coming from behind, what could be more annoying? Your multiple controls will delight your carries who will be extremely well protected from their opponents unable to reach range.

You now know everything about Muradin Bronzebeard, King under the Mountain. Go swing ax and hammer at your enemies with great turns of arms, and have fun in the Nexus!


Do you want to be up to date and know all the tricks for your video games? In gamesmanagers.com we enjoy playing as much as you do and for that reason we offer you the best tricks, secrets or tips for you to play non-stop. We offer you quality content and always updated to keep you up to date. That's why, in our website, you will find not only videogame guides but also tricks, secrets and thousands of tips so you can play to the limit. Are you ready to get it? Enter now and enjoy your videogame!
Retsnom - Overview ❯

Add a comment from Heroes - Muradin Guide: "A dwarf, you can't start!" "