Ragnarök Online Revo-Classique - Back to the roots of Poring 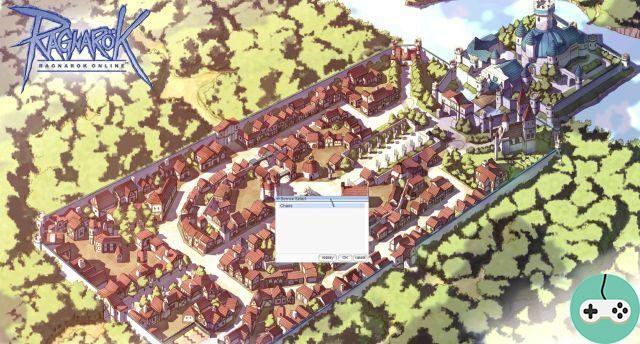 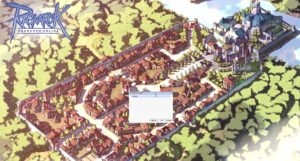 I started playing MMORPGs around 2004, with the late Star Wars Galaxies. Soon after release I then started World of Warcraft (which I never left) and tested most recent MMORPGs (Star Wars: The Old Republic, TERA, Neverwinter, Star Trek Online, Rift, ArcheAge, Guild Wars 2, Aion, Skyforge, Lord of the Rings Online, The Secret World, Final Fantasy XIV and I certainly forget several). But I did not know the heyday of the ancestors of the genre. I certainly heard some of my playmates mention Ultima Online, EverQuest or Ragnarök Online, their comments made you want ... but the opportunities were lacking. In any case until today because I finally made up for it! To make a quick history, Ragnarök Online was released in 2002 in South Korea thanks to Gravity. The title is however more recent in the West because it was not until 2007 that it landed in Spain. It is in an improved version, called "Revo-Classic" (or Revo-Classic), that the publisher 4game has decided to relaunch the title. If you are new to this platform, you should make up for this lack because it notably offers European servers for Lineage 2 and RF Online (as well as various other titles for the Russian and Brazilian markets).

A little trailer to get in the mood for Ragnarök:

First steps as a novice

There is no need to choose a character class: everyone starts out as a Novice, on an equal footing. The interface is crude, like the rest of the game. Even though there is only a limited choice of colors and hairstyles to customize your avatar, the preview runs in 3D, if you like. please! I present to you my new Onidra: 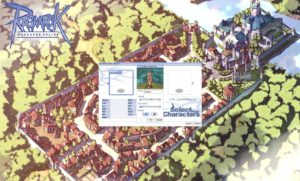 Without further transition, I arrive in a 3D world that awakens in me the nostalgia of the 2000s. Although offering a nice level of detail with varied backgrounds, the textures and models are simple and flat. There are no dynamic shadows and the effects are kept to a minimum. 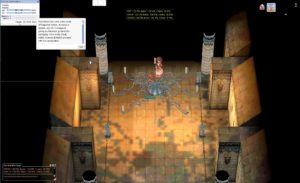 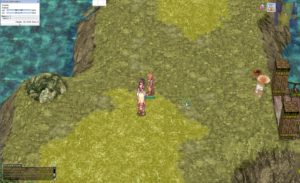 The character moves at the click of the mouse. Advancing fairly rigidly in all directions, it turns in the direction it is walking. The grip is quite easy even if at the beginning it turns out to be a little complicated in tight spaces or on the stairs, a badly placed click and the character gets stuck on one side and does not climb. The attacks are carried out with the left click of the mouse, leading to a lot of use of his field mouse! 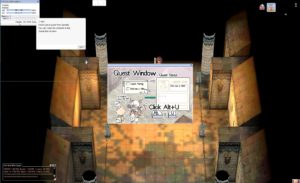 Very quickly, a young woman invites me to chat with Instructor Brade who gives me information on the controls and basic features. I learn to move, to open my inventory, to carry out a quest, to equip an item, to inspect the characteristics of a piece of equipment, to cast a spell, to put points of characteristics and talents. Once again, the interface goes straight to the point, with a set of small windows that move and close at will. They're not pretty, but they're practical, and that's good enough. There are some complicated shortcuts to open them, as well as buttons at the top left, below the character information (base levels, job level, HP health points and SP mana points). 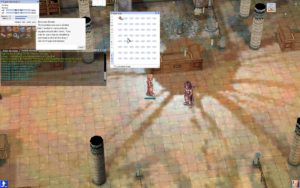 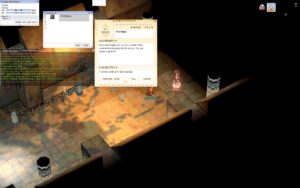 I also meet the first agents of two organizations that provide services to players around the world, the Kafra and the Zonda. They are able to teleport, store material, register a point of return after death, and give out various useful information. The Zonda do the same things, more or less, as they also organize one-off events. Finally, I learn that hostels are able to fully restore HP and SP for a small fee. 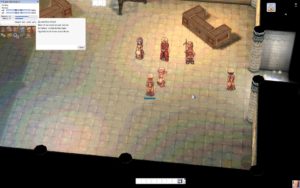 I finally leave for the field. Former players are able to escape this area exclusively reserved for beginners even if, a priori, it is not the most effective because this place is perfect for climbing the first 10 levels in relative safety. In any case, that's what I read ... after leaving it when I was only level 8, obviously! Another benefit of this area is that six managers provide a tome that provides access to some of the specific job skills for a limited time. I was thus able, for a few minutes, to become a Swordsman, an Archer, a Mage, a Merchant, an Acolyte and a Thief (Thief). I completed the few quests given, then my choice being made on the Mage job, I no longer saw any reason to stay ... Big mistake! 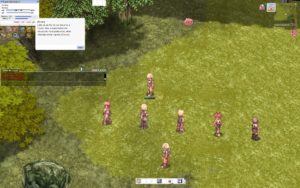 I paid dearly for my eagerness. Sent to a large city full of players, I then struggled to locate my master, finding neither a guard to inform me, nor the Mages guild. Having finally found her, I once again had a moment of hesitation at not understanding why I couldn't become a Mage. In one conversation, the guild leader told me to ask for level 9, while in the other he told me to be at least level 10. In addition, he reminded me that I had to unlock all the skills of Novice, so that I was missing the one to feign death. A little research on the internet told me that I actually had to go to a whole different city ... I took my courage in both hands, and I went on a trip to this other city, even more crowded. people, to finally find the said quest. Then I returned to the Mages guild ... and finally I was able to become a magician! 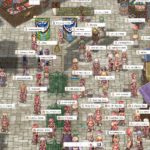 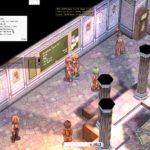 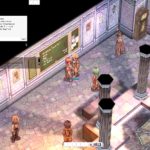 Tribulations of a Novice Mage 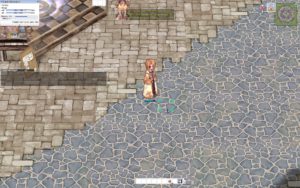 Starting again at Mage level 1 (but keeping the base 14), I have in front of me a priori forty levels to climb before being able to choose a more advanced job, Sorcerer (Wizard) or Sage. I have no more quests, and we must admit the game is stingy in quests. I have found NPCs here and there willing to give me items if I am able to bring back an obscure ingredient list but other than that I have no other way to level up than hitting monsters . On the other hand, I had a nice Mr. Smile (Mr. Smile) mask made! 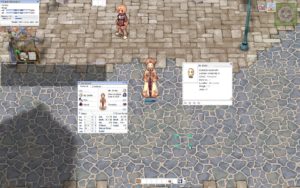 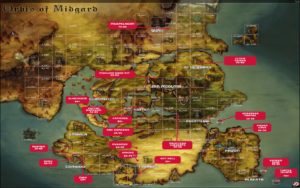 On the advice of a guide on the internet, I went to the southeast of the world, to Alberta. During about fifteen levels, I killed spores on a loop. These initially difficult to kill monsters have become very simple, dying from a single fireball, having had the opportunity to invest talent points to increase their effectiveness. Then I went to another area to kill wolves. I climbed around level 20 before going elsewhere to kill funny little monsters, Eggyras. 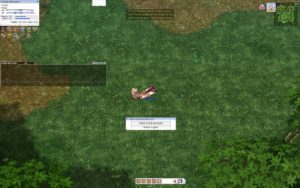 The game is difficult, as these enemies with a large amount of experience are much stronger than the others. With the right spell, it is possible to kill them in one shot ... but if this spell has not been well quantified according to the enemy's hit points (hit points that must be estimated because the interface does not deliver any information), the monster comes in contact, and kills in two or three hits maximum. Spells are difficult to cast on contact: they are not only delayed by the damage dealt, they can be simply negated. Suddenly, it becomes useful to use different ranks of spells, to keep the big fireball of rank 10 and its 6 seconds of casting for the engagement, before continuing with fireballs of lower rank, less effective. but also faster to cast (and incidentally costing less SP).

Death primarily results in a waste of time, as well as experience (but that's not a big deal). It involves a return to square one with only 1 life point, location to be chosen by speaking to a Kafra employee. Suddenly, you have to walk back to the monsters, which can take an easy 5 minutes (or even a lot more if the return point is stupidly linked to another distant city).

As of this writing, I am still just a little beginner in the world of Ragnarök Online, at the top of my 37/24 level. I know that once job level 40 (or even 50), I will have to raise the levels of my new job again. And even start all over once level 99, my Mage accessing Valhalla to start over again (with a big bonus despite everything). I've only scratched the surface of the map system, items that can be placed in gear to improve efficiency. My personal fortune turns out to be limited to just under 10 Zeny, and I haven't even rented a cart to transport my belongings during farm sessions. 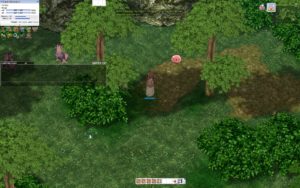 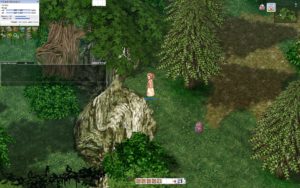 By itself, I cannot really advise you RO. The graphics are dated, the interface is horrible, the difficulty is high, there are no quests, the servers have slowdowns, and I'm not even talking about the annoyance when an invisible wall prevents jumping from. a hill, forcing you to go all around the map in search of an access ramp. The shop is full of items to buy for real money, which makes me fear a pay-to-win side (I lack perspective to really be able to judge but there is for example a premium system increasing experience gained by 30%). But that would also be to deny my pleasure. Because yes, I had fun playing RO which presents an unsuspected richness below the surface. The MMORPG is not easy to access. Very little is explained and there is no call sign pointing out one useful NPC from another. Whether watching a guidebook or believing in your luck, there is so much to discover and areas to explore, and this difficulty brings a sense of accomplishment. I was proud to have finally unlocked my first job, and even more proud to have obtained my smile mask. I will continue to play without hesitation, with the goal of at least leveling 40 to unlock my first advanced job. If you have not known this era of the beginning of MMORPGs, do not hesitate to test, the game is available for free from the 4game site: https://eu.4game.com/ro/