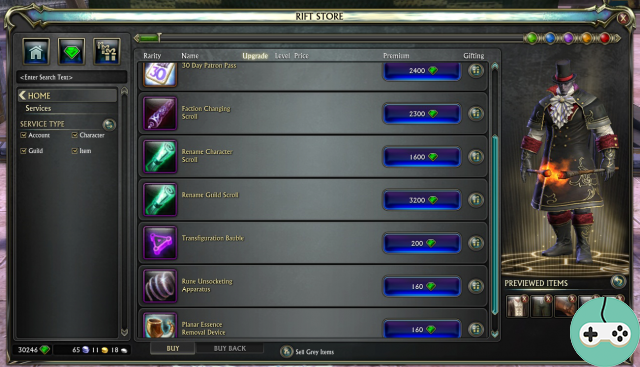 While the store is currently on the PTS (along with other modifications to 2.3), the Trion teams are answering various questions about how the new business model works.

The goal is that they are rarely found in the world. Safes will be more common than keys. Subscribers may (or may not) receive keys every week. This is something we would love to do but not sure it will be in place for 2.3. They should be tradeable so you can sell them to the auction house or sell them to the merchant for cash. Do not expect to see millions of them fall into your pockets.

The intent is for them to rarely drop in the world. Chests would be more common than keys. Patrons may or may not receive a number of keys per week as well. Its something we'd like to add but we are not sure if it will make it in for 2.3 They should be tradeable so you can put them up on the AH, or sell them to a merchant for a bit of coin as well. Don't plan on shoving a million of them down your throats. ~Daglar

They use our random item generation system for rewards. The chances of getting a subset of these are extremely low in the world, but it should be possible. Some people will panic when they see this, but it is possible to get orange items from these boxes. These orange items are NOT the same as orange items dropping in raid.

We are using our random item generation system for the equipment rewards that come out of these. The odds of getting a subset of these is extremely low in the world - but it should be possible.Some folks are going to freak out when they see it, but it is possible to get Orange items out of these boxes. These orange items are /not/ in the realm of raid drop oranges.~Daglar

Stream prices mean they are subject to change. We are currently reviewing the price of the items. The new items will not be on the same price scale as the old ones, they will be more expensive. We are in the process of discussing up to how much.

Old items don't get more expensive, you don't lose access to everything you had before. We are expanding the selection of objects dramatically. We make sure that there is always a way in-game to earn these items. While many new items are super cool, none are required to be a dimensioneer in RIFT.

Prices in flux means that they are subject to change. We are reviewing the pricing on the items. The new items will not be on the same scale as the old items - they will be more expensive than the old items. How much more expensive is what we are currently deliberating over.

The old items are not increasing in price - you are not losing access to anything you have previously had. We are expanding the selection of objects dramatically. We are insuring that there is a way in game to earn these items. While many of the new objects are extremely nice, none of them are absolute requirements for you to be a dimensioneer in RIFT.

I'd also like to take a moment to talk about raids, tokens, and the reality of RIFT monetization.

Raids are a big part of RIFT, a part where I would like to see more people experience it. I don't want to make it happen by simplifying the content or anything like that. I want to attract more people to the game who enjoy it and who will naturally come and try this portion of the game.

There is no hidden plan for trying to over-monetize raids in RIFT. I am honest, as I always try to be. If FORCE stiffeners to pay large sums of money were part of a plan, it would be a flawed plan because to be honest people, stiffeners are not the majority.

Ambitious content like raids is important in RIFT, which is why we have continued to invest in this area, and we will continue to invest. Even if you are not a stiff, I know quite a few people who imagine themselves to be concerned or would like to be concerned. The "token tablet" no longer affects the high level for several reasons:

That said, the permanent bonus from subscribers (not dailies) will affect high-level tokens. The value of this bonus doesn't break with the game, it doesn't really change the game RIFT raiders know today.

RIFT won't win the race by tapping into a given group - yes it has to make money to keep the updates going and I know everyone understands that.

I'd also like to take a moment and talk about raiders, token tablets, and reality for monetizing RIFT.

Raiding is an important part of RIFT. Its a part of RIFT that I wish more people got to experience. I don't want to achieve that by nerfing the content or any thing like that. I want to bring more people into the game that enjoy it and naturally want to try out that portion of the game.

There is no master tin-foil hat plan to try to super monetize the raiders in RIFT. I'm being straight up like I always try to be. If trying to /force/ raiders into paying large amounts of money were part of any plan, it would be a failing plan because to be honest guys - raiders are not in the majority.

1. Raiders are a smaller group and I don't want to super target them with a bonus.
2. Having it affect the top tier is skirting the edge about what I feel is acceptable.
3. For all the aspirational folks out there that can see themselves in the shoes of raiders - I don't want you to have the perception that to take part in that section of the game you are going to be forced into buying something.

Now with all of that said, the patron perma bonus (not the daily ones), will affect the top tier of tokens. The value of that bonus is not game breaking - and really does not change the game from where every raider in RIFT sits today.

RIFT doesn't win the race by trying to be exploitative of any given group - yes it has to make money to continue getting updates and I know everyone out there understands that.

So, what do you think ? Do you think Rift is heading in the right direction?

Add a comment from Rift - Some details on the f2p