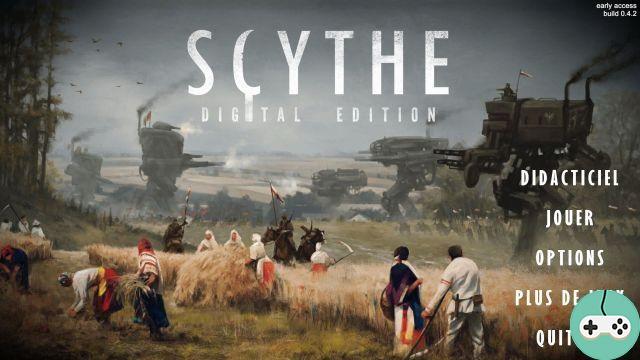 A tabletop board game, Scythe was recently invited to Steam in an early access digital adaptation that incorporates the rules of the board game developed by The Knights of Unity studio and published by Asmodee Digital. In this 4X, players face off in an alternate period inspired by the 1920s. Each controls one of the five factions and must attempt to make a fortune by taking land, producing resources, constructing buildings and deploying. combat mechs.

Why did you choose “Scythe” as the name of the game?

Scythe designates a scythe, both a tool used in agriculture but also a weapon of war. It perfectly represents the combination of the two strong elements of the game. Your workers depend on the protection of your military forces, just as your empire depends on the resources that your workers produce. “Scythe” is pronounced “saille-th”, with “th” pronounced as in the English word “the”

Before starting, I want to clarify that I do not know the board game, so I have a completely independent view of the game, which I will not be able to compare with its physical version. If, like me, you are just starting out without knowing the rules, the booklet is available for download from the options menu. Plus, an in-game tutorial spells out all the details you need to know if you'd rather play than read. 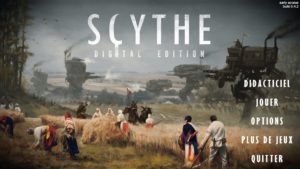 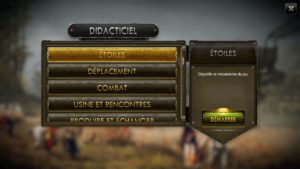 Through 11 small chapters, the game presents us all the basics to know. The presentation is a little disjointed with each time parts already very advanced which focus on a particular point. Inserts explain what is displayed on the screen, with large clippings in red on the places to click. Suddenly, it is a little difficult to understand the context well and I, on several occasions, clicked on interface elements because it was flashing, without really understanding why. 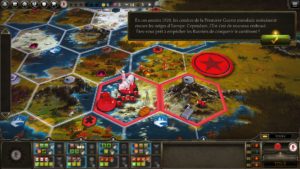 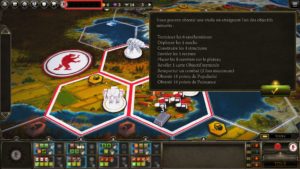 Despite everything, I think I understood the basics, especially thanks to the games I did afterwards against bots in easy mode which allowed me to put the things explained in context. The goal is therefore to obtain stars, the game ends as soon as one of the players obtains 6, which can happen in different ways: complete the 6 upgrades, deploy the 4 mechs, build the 4 structures, enlist the 4 recruits, place the 8 workers on the board, reveal 1 completed Objective card, win a fight (2 times maximum), obtain 18 points of Popularity or obtain 16 points of Power. As you will have understood, it is difficult to win by focusing on only one aspect of your Empire, so you will have to develop on several fronts and always make sure to block other opponents.

At the start, we choose our faction, which comes with specific advantages (Nordic workers, for example, are excellent swimmers and thus know how to cross rivers), then we receive two random objective cards (unknown to other players) which are a relatively quick way to get a star as it is accomplished on its own. 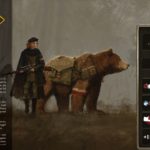 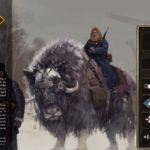 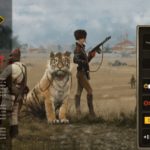 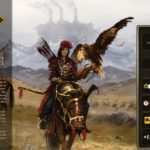 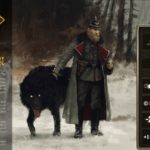 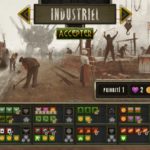 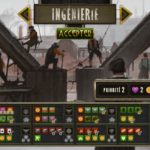 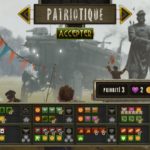 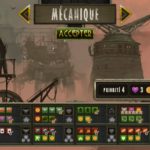 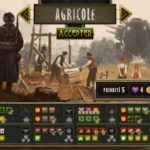 The game board itself is made up of a main base for each player and hexagons which are of several types, which define the resources there (farm: food, forest: wood, mountain: metal , tundra: oil, village: worker). The appearance is rather pleasant, with a good level of detail when zooming, or on the contrary a general view to the maximum. The units are represented in 3D and come to life during movements or actions.

Tunnels are present on some hexagons, which gives the possibility to the units to pass on an adjacent box, very useful insofar as most do not cross lakes, seas or rivers, especially since the control of 'a tunnel brings a bonus to the score. To control a territory, you must move a unit or build a structure (control is then retained only if there are no enemy combat units). The base, it always remains affiliated with a player, point of departure and place of retreat in the event of defeat, where it is not possible neither to build structures, nor to move units.


Finally, there is a unique territory in the center: the factory. By going there, it allows you to draw Factory cards which unlock very special actions. 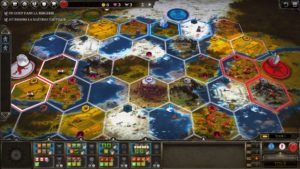 Thanks to wood, it is possible to build a structure per territory, except on the unbuildable lakes and of course the base, which can neither be moved nor destroyed. They provide one of the means of earning stars and offer advantages (like the mill which increases the production of the land where it is built).

By walking with his character on a box stamped with the green and yellow wheel of encounters (at the bottom of the hexagon), this triggers random events with different ways of reacting to them which bring various bonuses. 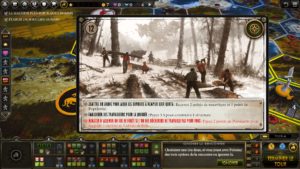 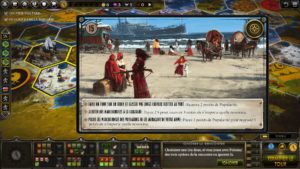 As you will have already understood, three styles of units exist: 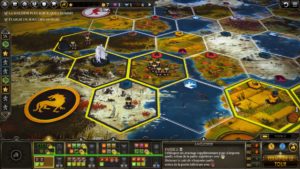 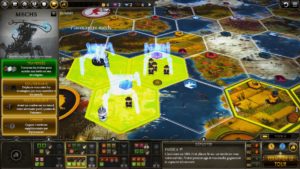 When the going gets tough, you have to go on the attack! The combat is resolved by opposing the strength of each player present on the battlefield (the square where the confrontation takes place), sum of the Power points and Ammunition of each, attacker and defender. You have to estimate the right number of points to commit for each confrontation, to win it without wasting unnecessary resources. 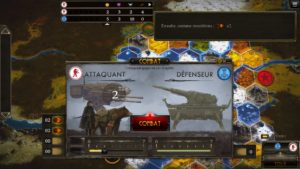 Various other bonuses are to be taken into account and are added as the turns go, such as recruits who passively add currency (Power, Popularity, Currency and Ammo) each turn based on the actions of other players, but also those given by the structures. Oil is very useful in increasing the yield of stocks in the upper row of the player card, and reducing the cost of productions in the lower line of the player card. 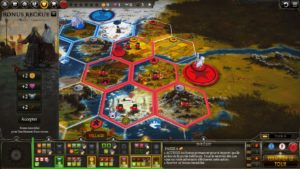 Throughout the game, you also have to constantly remember what brings stars and what is missing to win the point that could make all the difference (it would be a shame to let the other win when it was enough, for example, to create a final mech rather than paying for an upgrade). Different interface elements are there to help you navigate, even if the beginner may be a little lost at times. Especially since beyond the stars, the calculation of points is quite complex because the modifiers depend on the chosen faction and the figures evolve according to different tables. Finally, whatever, I won! 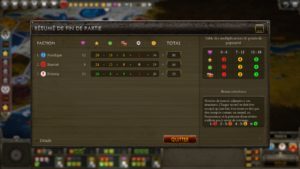 For the moment still in early access, the game offers to create games, only solo against bots in two difficulties (easy or normal) or against other human players. On the other hand, you will have to lend the mouse in this case, which is only practical if your opponent is at home (in this case, above all, it avoids leaving the game board and automates the counting of points). 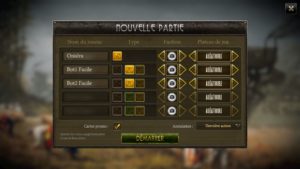 From what I have been able to judge from the rulebook, I confirm the catchphrase from the press release: "Scythe Digital Edition has been developed with a deep respect for the base game in order to make people discover Scythe to video game enthusiasts, while respecting the DNA of the board game ". On the other hand, the game remains quite difficult for a beginner to understand, at least as it stands, because according to the roadmap published in mid-June, the developer plans to improve the tutorial missions in July. In August, they will notably add multiplayer support as well as a spectator mode and a difficult bot.

A promising game therefore, especially if they keep their commitments, which will appeal for the moment especially to regulars on the board, and which will ultimately be aimed at all 4X enthusiasts.

add a comment of Scythe: Digital Edition - The 4X Board Game is on Steam