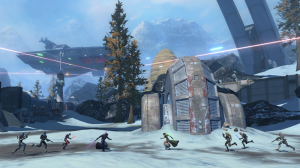 As two mighty armadas wage a merciless battle in the skies of Alderaan, Imperial and Republic forces battle on the ground for control of three independent laser cannons pointed at the fleets that fly over the planet. The outcome of the battle depends on which side controls the cannons ...

In the Alderaan war zone, Imperial players and Republic players compete on the rugged battlefields of the famous planet. Far above the battlefield, a troop transporter from each side tirelessly brings reinforcements to his faction. To get the victory, each side must destroy the transporter of the other side. To do this, players must take control of three laser cannons scattered across the battlefield. As soon as a team manages to take control of a cannon, it will begin shooting at the enemy transporter!

The more turrets a faction controls, the more bombarded the transporter will be. When a transporter structure is damaged too much, the ship explodes and the battle ends.

Turrets can change sides multiple times during the battle. Teams must balance attack and defense in order to maintain continuous fire on the enemy transporter.

The goal is to take as many turrets as possible in order to bombard the enemy transporter. To do this, players must go and capture the points of right, left and center. These points are turrets that fire at the enemy ship.

You earn medals mainly by defending points, capturing them and defeating enemies.

Each captured turret gives 5 points of damage every few seconds to the transporter of the opposing faction, the more turrets you control, the more damage their ship takes! A ship has 600 health points and there are 8 players per team.

In general, in a game of Alderaan, teams are content to capture 2 out of 3 points which allow them to have the advantage while only focusing on two turrets, so it's easier to protect than to scatter. on 3 points. We will see some classic strategies in relation to defensible points: the left turret, the center, the right turret.

A tactic often used is there 2/6/0. That is to say that out of the 8 players of the team, 2 will take the left turret and the 6 others will try to capture the central point (point which is often an area of ​​major battles). It is necessary be sure of yourself and have very good equipment to counter the mass of enemies who would come and take the central point. Once the 2 points are taken, we keep them and defend them until the end of the game.

Tactics 4/0/4 is a 2/6/0 counter. While the enemies are concentrating on the central point, go quietly to take the 2 outer turrets. You will have the upper hand on them and presto, 2 turrets acquired. The negative point is that in case of big problems on one point, your 2 teams are very far from each other. So we need a good communication and fast, mobile team.

Obviously, you have to communicate a lot with your teammates, which many players forget. The fact of signaling that 2 enemies are coming towards our point on the left makes it possible to realize, it's quite stupid, that if they are on the left, they will not be elsewhere and we can therefore, if we communicate well, know exactly where each enemy is and act according to their attacks.

The word most used to signal these arrivals of players is the "Inc", of Incoming = On approach. If one is alone on the left and that one signals "inc 4 G", the players understand that 4 enemies move towards the point on the left and that it will therefore be necessary to defend this post.

Wait for your teammates, regroup before attacking, there is no point in going one by one to the slaughterhouse.

Adapt yourself constantly in the situation and surprise the enemy. For example, if you control 2 out of 3 points, do not stand idly by to defend, send 2 or 3 players to tease the enemy, he will naturally send troops to defend and during that time your other points will not be not to fear a massive attack.

Alderaan is full of bonuses of all kinds amounting to movement speed and expertise stats. Use them, abuse them!

There is a underground passage under the central turret. This pass has 2 speed buffs allowing you to quickly go from left point to right point. Very practical in 4/0/4 tactics.

Make the most of the decorations to hide yourself from enemies.