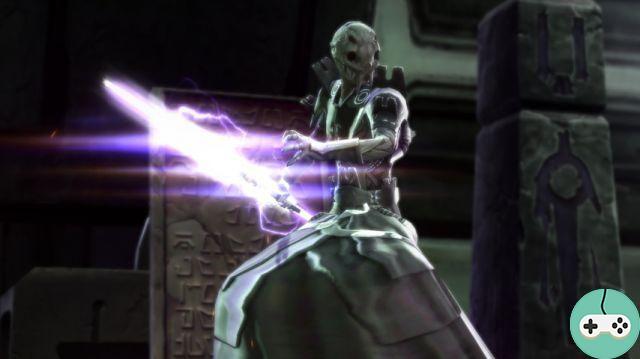 A guide provided by Fayte, from the Phantoms Guild on The Red Eclipse.

This guide is intended primarily for beginners, but also for experienced players wanting to discover the Assassin Tank. I'll be talking about the Nightmare difficulty only, as for PvP, I will ask you to be patient a bit, I will update quickly. 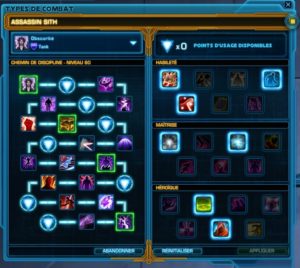 Kephess and Nightmare from elsewhere :

Dash'rood, Slayer and Olok the Shadow :

Tyrants, Raptus and the Council :

Of course, we pull in Stealth to have the 4 accumulations of armor from the pull and with the Dark Zone.

3. Wilting : the -5% damage debuff cast by your target, big animosity

4. Correction : the rest of the cycle will depend on your procs.

Stimulation (resets Shock and gives 100% critical chance to next) +

Conspirator's Envelope (allows the use of Mutilation face) ===>

If the Mutilation give it back to you Stimulation, make one again Electrochoc, you will consume both loads ofCarefree under Stimulation.

This is the best possible scenario in terms of animosity, because you will be doing 2 Electroshock has 180% crit (100% Stimulation, 60% Recklessness, 20% your gear). With the change on the critical, it turns into + 80% surge, the Shock goes from 5k to 9k!

Pulling Carelessness is not a problem on the defensive side just like the power dopant, the 30% absorption of Carelessness allows the healer to be able to type without surprise, and you will not need your defensive dopant. before a good time, because you can largely procrastinate with the rest of your defensive powers. The DPS of the Tanks is really important in Nightmare, this point should not be neglected.

Or you try to deliver a

Correction to try to get Stimulation again, it's up to you.

(In the situation where you didn't have any proc on the Patch, put your

If you have the use

Abri de l'assassin, remember to reach as many allies as possible with your Provocation Multicibles, you will apply a light treatment over time. Not very interesting, but you will also increase the damage reduction of all your partners by 5% for 6 seconds (the time of the taunt).

7. Dump, in case you still haven't put it

10. Single Target Provocation. Do not hesitate to put back your single target provocation as soon as it is available, you will be quiet for the rest of the fight, you keep it only if you have to switch quickly after the pull (Toth and Zorn on Denova, or the Palace Council for example ).

For the rest, it's simple, we use

Wilting as soon as it's available, if possible after a Taunt, as the 4-piece set bonus reduces their cooldown.

Dump only to refresh the Precision debuff or when you have nothing else.

Last thing about the new power of 4.0,

Not a ghost. It can actually also be useful to us to have the proc of the Mutilation, only at the commitment it is better to make a Correction because she taps twice, so she has twice the chance of making us proc the Stimulation.

Assassination (when your target is at -30% health)

The 4.0 priority order is rather funny because of the new distribution of statistics:
Absorption > Bouclier > Endurance > Defense

Absorption remains a priority, the Shield is gaining importance, and yes, I am putting Defense after Endurance, so much Defense is useless. On Defense-oriented bosses (Grob'thok for example), we dodge 50% of the attacks which gives damage received per second of 2K, it's absolutely ridiculous.

On the other hand, on bosses / phases where Defense is ineffective, we really take beautiful hairspray, the last phase of Brontes Nightmare for example, we easily go up to 4K damage received per second.

The worst boss currently in Tank is Storm Helmet on Denova Cauchemar, he makes 4 attacks, 1 "white hit", a cone attack (blue wave), a projection (when the shield phase begins), and his areas of electrical damage. Its projection and its zone, we do not care, suddenly all we have left is its white stroke and its cone attack. The problem is that they are Elemental type, so Shield and Defense are ineffective, only damage reduction works (or Scholar / Sorcerer Bubble for example).

Since we can't increase our damage reduction via stats, and increasing Defense / Shield / Absorbtion is useless, we only have one possible stat left, Stamina.

For that, I therefore take the 43B Advanced Reactive Modules, these are the 220 mods that we buy with Data Crystals or that we get Out of Set on Hard Mode Operations. I remind you that there is no Hors set 224.

For Sophistications, I only use the 220 Off-Set Operations in Dificile mode:

Be careful, this is not the same as the PvE merchant, the Sophistications with Data Crystals 220, cause us to lose Absorption / Shield.

In terms of Implants and Atria, it's the same, only the Hors-Set 220 always to gain Endurance without losing Absorption / Shield.

Of course, we take the 224 Token Armor anyway.

With that, we therefore trade a maximum of Defense and Mastery for Endurance, without losing Absorption and Shield.

Finally, I mainly use Shield Upgrades, aim for 40%, and will switch from Sophistications to Absorption as my Shield increases with future gear levels, reaching 50% Absorption.

Relic of Compromising Serenity : Increases Defense Index by x for 20 seconds.
This relic is no longer interesting, because with +2100 Defense index gained, 600-700 index only represents 4,5%, with 224 equipment and therefore 2900 Defense, it only gives 2,4, XNUMX%!

For dopants, I use those that reduce damage taken by 20%.

Zone obscure : It's your top priority. It gives you 15 Charges for 20 seconds, each charge gives you + 15% in Shield, every time you lose a charge you increase your

Dark bulwark. Le Rampart can accumulate 8 charges, each one adds 1% of Absorption to you.

We also have an addition: each time we consume 1 charge of areas , we have a 20% chance of restoring it while extending the duration of our areas of a second. Finally, we earn 2 more charges on our Rampart (8 -> 10).

Finally, be careful, we must not refresh our Zone as soon as it is available, we must wait until we have lost all our charges to benefit as much as possible from the Absorption bonus of our Ramparts, our last 7 charges of Zone obscure are the most profitable.

Shroud of strength : Dispels all hostile effects (dispell), and gives us a 100% chance to resist Force / Tech attacks for 3 seconds (5 seconds with Disjunction use).

It is the defensive power that makes the Assassin Tank so special, because well placed it is very effective, it gives us more dissipation, and it allows you to avoid certain attacks that usually hurt quite a bit. I take the example of Stormcaller with its elemental attacks, where your Shroud will be your best friend, as well as with the tentacles of Brontes or the explosions of lightning of Tyrants.

Deflection : Deflection increases our Defense chance (therefore dodging) by 50% for 12 seconds. This is a very effective power to "free" your healers for a short time on Defense-sensitive bosses or adds. Healers are allowed by using this power on Defense bosses to free themselves in order to be able to DPS or to heal the group en masse if necessary.

This power makes you immortal on Nefra / Grob'thok / Calphayus / Kephess (Denova) for example. It is very effective on Draxus (only Draxus himself, not Adds) and on Zero Corruptor Adds as well, however it is almost useless on bosses like Tyrants and Brontes.

Advanced Saber Charge : Advanced Saber Charge gives us 25% damage reduction, plus it restores us for 15% of our max health. It has the advantage of always being effective regardless of the situation, but above all very useful to relieve your healers and allow them to go back up the raid!

This defensive power is the priority since it will work on all attacks thanks to the increased damage reduction in addition to the healing received (it works even on DoTs), use it alternately (30 ec-1min d 'space) with your medipac allows you to have a "panic button" regularly available. Their cooldowns are similar (1min30).

Carefree : In addition to giving us 2 stacks of 60% more critical on our Force attacks, it also gives us 30% Absorption for 20 seconds! It is really interesting and effective because it is complementary to your Zone obscure, you will make it easier for your healers to hold you down for a long time (20 seconds).
Suddenly, we limit the use of Recklessness in our cycle, its use for defensive purposes is often more interesting.

Force Occultation : Shroud of Madness at the Heroic level allows us to trigger our Force Shroud for 2 seconds (4 seconds with the Disjunction use) when we use our Vanish, it is very interesting because it allows us to use our Force Shroud, no need to explain why it is interesting, just read the Shroud part again, but of course the Force Occultation can become risky since we lose aggro, with anticipation and practice that comes all alone but not playing the hero, it can end in a stupid wipe. Be careful though on the bosses where the tanks must switch, not having a taunt available because of the vanish would also be stupid.

Taunt in SWTOR is special because it works as a threat multiplier.

Tip for CtoC DPS: if you get more than 3 meters away, you will need to generate 20% more threat to regain aggro.

We have (like all Tanks in SWTOR) 2 provocations at our disposal:

Mind control : This is our single target taunt, it has a 15 second cooldown and a 30 yard range.

Mass mind control : As the name suggests, this is our multi-target taunt, it has a 45 second cooldown and an area of ​​effect of 15 yards around us.

I leave you with a video of our down of Brontes Nightmare, to give you a final overview of what the Assassin Tank gives:

Wildstar - Ride with a class: Warrior