Here is the rest of the guides with the second boss from the Dread Fortress:  Draxus 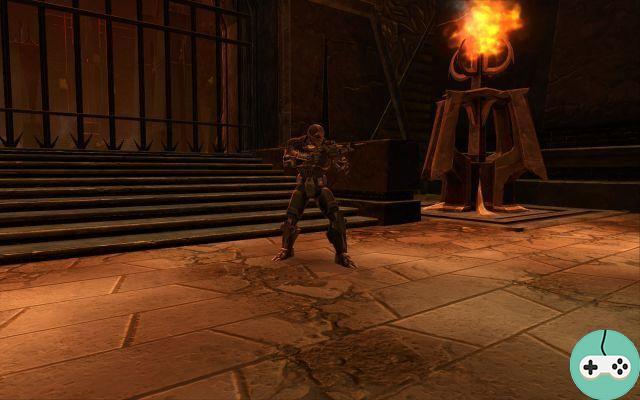 This fight is quite special because you will not only have the boss to kill but a succession of groups of enemies as particular as each other. First, here are the abilities of the boss itself:

And finally here is the most interesting part: the abilities of weak enemies.

As I explained to you above, the boss is accompanied by many groups of enemies that will have to be managed as well as possible. So I will explain each part of this boss step by step. This fight also requires respecting placements. So divide your group in two with 1 tank, 1 healer and 2 damage classes in each group.

This is surely the simplest phase because there is only the boss. Remember to distribute yourself in the room (about 5 m between the members) because you will have the right to a corrosive grenade. When this is sent, a tank must recover the attention of the boss in order to take the series of shots.

Send each group to kill the right and left subtérots, those in the middle will naturally come from one side or the other. Distance classes should be kept away because these enemies explode when they die. If your group has two melee classes, place them in a different group to balance the healing.

Send each group to kill the Regulators on the right and the left, the middle subterots will naturally come from one side or the other. Your two groups must be well grouped because the damage is distributed according to the nearby players. It is important that tanks don't taunt because they risk recovering the damage from the 6 regulators. To limit the damage, determine a targeting order (eg: from the wall to the post). When the 3 regulators are dead, kill the two remaining Subterots by moving away because they explode.

Send each group to kill the corrupter on the right and left by cutting his spells. For distances and healers, it is recommended to stay grouped towards the boss to share the damage from the force lightning but far enough away so that the whole group does not get the corrosive grenade. The ideal is to keep a correct distance of about 5 meters between members. If you have two melee classes in your party with you, send them together to the same side to share the damage from the Force Lightning. And if you only have one melee class, send a distance with it so it doesn't take too much damage. Then leave the commissionaires aside because they do not hurt very much compared to the boss. Once the boss leaves, finish the last enemies to go to the next group. This last phase will allow your healers to regenerate quietly.

The easiest way is to leave the threat to a damage class until the dismantler casts its spell. The tank must recover the enemy at this precise moment or else see his companion fall in combat.

This phase, which seems quite complicated at first glance, is ultimately quite simple. Send all your damage classes to the corrupters in order to kill them as quickly as possible while interrupting their pipes. Healers should stay with the tanks to limit the damage from Force Lightning. When the 2 corrupters are dead, you will have no more threats except the boss. So remember to regroup while keeping the usual distance of 5 meters. When the boss goes up, finish the commissionaires then the ramparts. Your healers here have a regeneration phase during the 3 ramparts.

Just kill the fastest corruptor then the two dismantlers. A damage class must recover the threat before the dismantler casts its spell in the same way as group 4. End with the pillager then the rampart.

Guardians must be turned with their backs to the raid so that the area does not appear towards other members. Simply pass behind their backs when the area is laid. Be careful though with the loss of threat when the guards launch their rampages.

Quite simple group because you just have to kill the 2 corrupters in interrupting their pipes. If a mass affliction is not interrupted, it will be very easily manageable as you will be grouped together.

Certainly the most complicated group to manage at the beginning because your first tank will have to recover the two guardians while the other will take care of the boss. It is important not to focus on the boss hoping to kill him because he has a immunity shield about 15 seconds. So prefer to kill all the small enemies in the middle that inflict fairly significant damage to your group. Once the threats have been removed, all you have to do is kill the boss, finishing with the guardians.

This is the most complex boss in the operation after Dreadmaster Brontes. Indeed, this one requires a total knowledge of the combat in order to anticipate the groups of enemies. Each player in your group will need to be responsive and focused because the slightest mistake can cause heavy damage and lead you to defeat.


Do you want to be up to date and know all the tricks for your video games? In gamesmanagers.com we enjoy playing as much as you do and for that reason we offer you the best tricks, secrets or tips for you to play non-stop. We offer you quality content and always updated to keep you up to date. That's why, in our website, you will find not only videogame guides but also tricks, secrets and thousands of tips so you can play to the limit. Are you ready to get it? Enter now and enjoy your videogame!
SWTOR - Vanguard Soldier (1-30) ❯

SWTOR - At the balance of the Force