Zorn and Toth is the first step in the new Operation Explosive Conflict, after a long, winding path strewn with groups of mobs.

Like Sorno and Jarg in Karraga Palace, it's a double boss that requires two tanks (like many explosive conflict bosses for that matter) and that must be killed within seconds of each other. 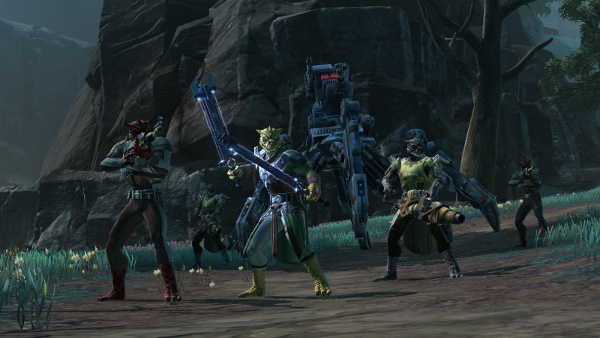 2 tanks, 2 healers, 4 dps. Note that the distances are advantageous in this fight.

The key principle of the fight is that the two bosses will have to stay at a distance of more than 25 meters from each other. Indeed when these approach, Zorn poses a weakening "frightened" (in a radius of 25 meters) which increases the damage done by Zorn by 100% (among other things, the rocks he throws).

To make matters worse, Toth regularly jumps on Zorn which has the immediate effect of placing the frightened effect on the tank and possibly the melee located within 25 meters at the time of the jump. Then follows a reset of the threat and an immunity to provocations of a few seconds which can be very painful for the dps which takes over the boss.

Be careful, during the jump, an earthquake occurs causing great damage to people in the landing zone!

Both bosses also do bumps which make combat difficult for tanks and melee combat.

Zorn uses a technique regularly on his tank, always only to be cashed by him (force scream) and which will be followed by area damage on the whole group.

Of course, it will be necessary to avoid as much as possible the damage that the boss sends on the members of the group, rock and whatnot! Watch out for your feet, it's classic.

Finally, the boss has a soft enrage at the death of one of the two (you have to kill them a few seconds apart) and an enrage at 4m. 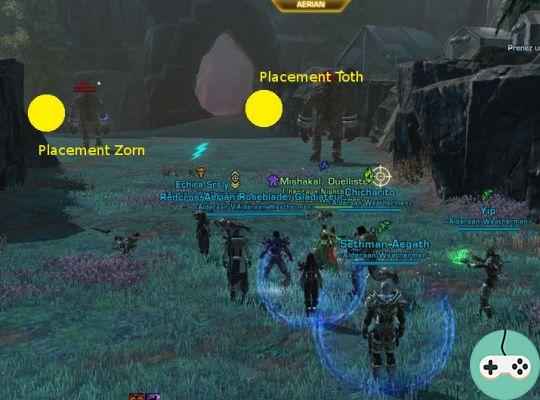 The placement on this boss is particularly important in order to limit the damage taken.

The main idea is that all distances, including healer, be more than 25 yards away from Zorn so as not to take additional damage. If you have at least two distances, only the tank will be affected and it will be the only one to have to change targets which will limit the loss of dps. Otherwise the melee dps on Zorn will probably have to switch targets as well.


It's up to you to judge the ideal location for the two bosses but keeping in mind that they must be within 30 meters of each other, we adopted the following placement: Zorn next to the tree and Toth on the rock face on the opposite side.

The tank classically always keeps them with their backs to the group.

Last but not without importance, once the two beautiful steps have been sent beyond the grave, a human will appear - their trainer - who will have to be killed to validate your success. It is not very resistant but try to keep a healer and a tank alive otherwise it causes unpleasant surprises ....

add a comment of SWTOR - Explosive Conflict: Zorn and Toth