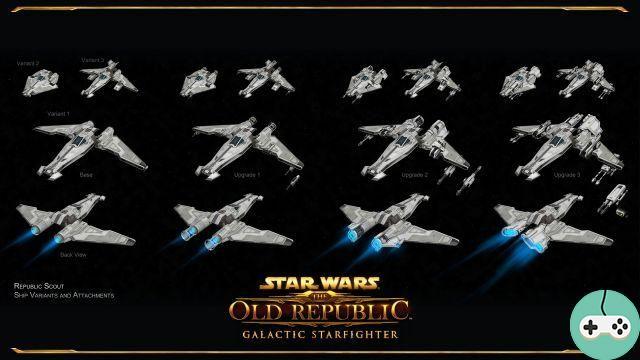 Who says space battle naturally says ships! And you are going to have a choice in Galactic Starfighter. Four classes of ships (the fourth will be there in February), several versions in each class and the possibility of equipping them according to the way you play, that promises many hours of testing.

To give you an idea, here are the four known ship classes, with their strengths and weaknesses. thanks to Nicou and Llogwey for their help in translating Dulfy's article.

Scout ships come in two versions. One of them is the common, agile and weakly armed variant while the other is a heavily armed scout comparable to a combat hunter. 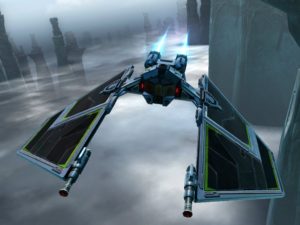 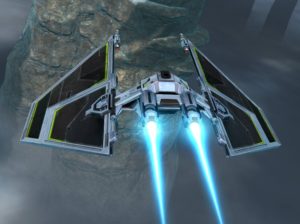 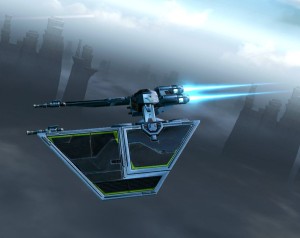 The Imperial Tandankin shipyards produce a small number of elite scout devices used for both reconnaissance and skirmish. The S-12 Blackbolt combines extraordinary speed, maneuverability and strafing capability with powerful communication probes and antennas. Enemies can be detected early on and their position relayed to allies - or the Blackbolt pilot can engage enemies directly with short and medium range laser cannons. Stationary targets are prime targets for Blackbolt missiles. The Blackbold only has basic defenses, however, with weak shields and a thin, reinforced fuselage. For this reason, Blackbolts pilots often earn a reputation as danger thirsty or suicidal lunatics (sometimes both). 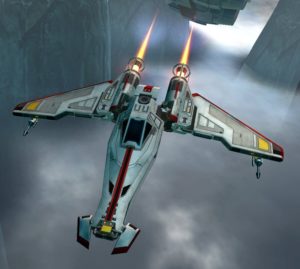 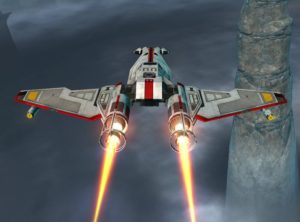 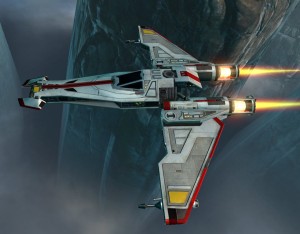 As the backbone of the Corallia Stardrive scout ship series, the Novadive is designed to provide an ideal balance between reconnaissance and offensive capabilities. Advanced probes and communications systems allow Novadive pilots to detect enemy ships quickly and relay their positions to their allies, while the short and medium range gun slots and missile slots ensure the ship is able to hold its own. fend off against enemy fighters and even engage armored objectives. Unfortunately, the defense systems are poor at best; veteran pilots have learned to rely on the speed and maneuverability of the Novadive rather than its shields and armor to survive heavy-handed attacks. 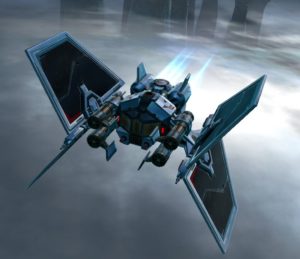 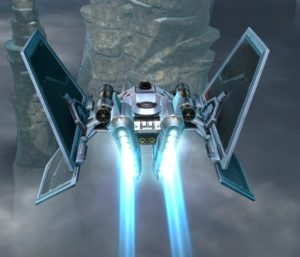 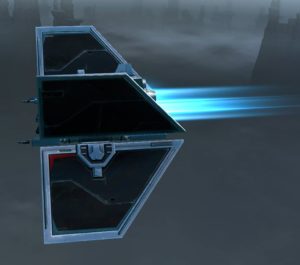 The Tandankin shipyards have contributed to the Imperial war machine for decades, specializing in experimental concepts. With its array of laser cannons, ship-to-ship missiles, and reinforced armor and shields, the Tandankin-built S-13 Sting hardly manages to rank as a scout ship, but it still has probes and ranges. communication scarcely less efficient than those of other vessels in the scout category. Its weapons and defenses don't yet rival those of a full-fledged hunter but they can be just as deadly in expert hands. 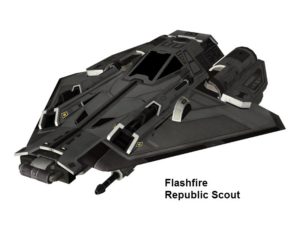 When the Corellia StarDrive appeared to be on the verge of losing its military contract, the company refocused on a new model of scout ship - one that could do without probes and communication range as well as specialized probe technology at the benefit from more powerful laser cannons, medium range missiles and more powerful shields around the hull. The result was the Flashfire, combining the speed of other scout ships with deadly offensive capabilities. A Flashfire cannot compete head-to-head against a fighter, but its maneuverability can make the difference for an experienced pilot. 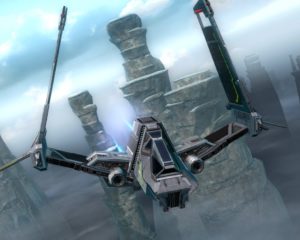 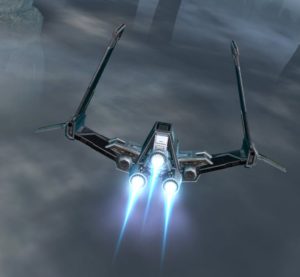 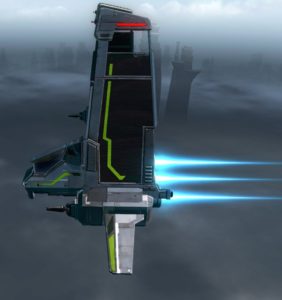 The ultimate Imperial dogfighting vessel, the F-T6 Rycer (named after an Imperial pilot of the last war) is produced at the Dromund Kalaskar shipyards. It can be equipped with two main blasters, including a multitude of options. Efficiently equipped, it can destroy targets at any range. The Rycer is also much more maneuverable than most other assault ships, however it is quite fragile, leaving its survival in the hands of the pilot. 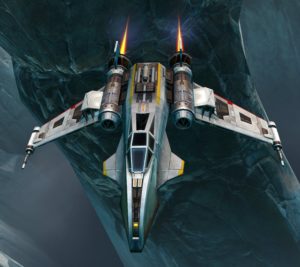 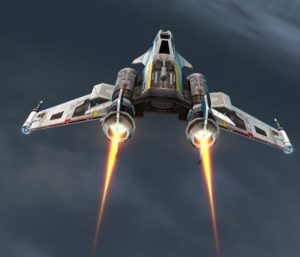 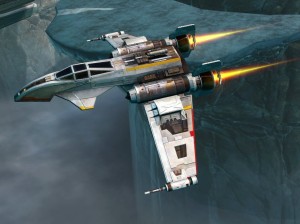 Rendili has been producing ships for the Republic for centuries, and the FT-8 is his latest work, redesigned from the FR-5A Honor Guard. The Star Guard carries with it two blasters and enjoys superior maneuverability than other assault ships, to the detriment of defense. Ion cannons and lasers can be added to it to increase its firepower and engage targets over multiple distances, but it will still lack power on heavily armored enemies. On contact during dogfights, however, it doesn't get much better. 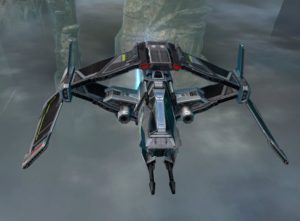 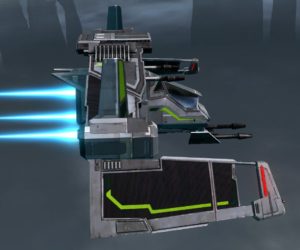 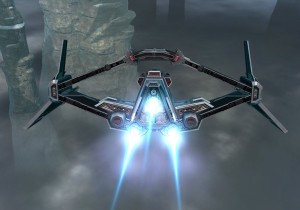 In the Dromund Kalakar shipyards, tradition is as important as innovation, and the Quell follows that line, pairing modern design with a name honoring the past. Carrying with it two secondary weapons, which it can exchange according to the range of the enemies, the Quell is a versatile vessel, combining speed, maneuverability and defense. 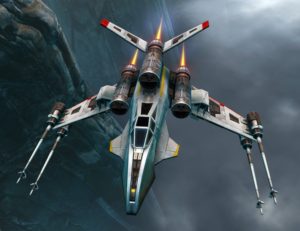 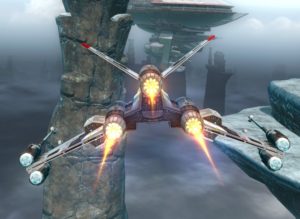 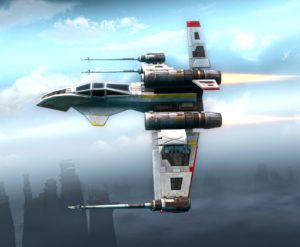 Well armed, well protected, and with the speed and maneuverability that a pilot expects, the FT-6 Pike from the Rendili shipyards can carry two secondary weapons in addition to its primary, making it a dangerous opponent in the short. and medium range, being able to take out enemies as well as heavily armored targets in a single attack.

There is only one type of gunner ships at the moment. 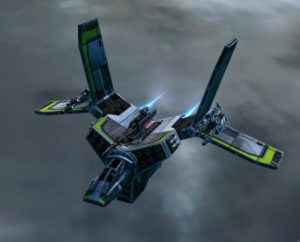 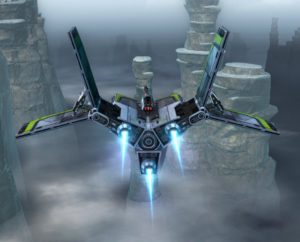 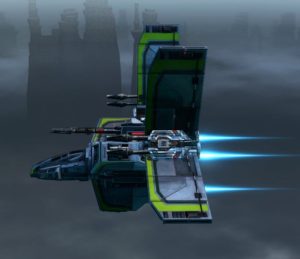 After the Empire conquered Sullust, Imperial engineers put several local Sorosuub factories to work to produce parts for combat ships. The GSS-3 Mangler manufactured by Sorosuub uses two types of interchangeable gun ramps, shoots quickly and has an improved communication range. Her defenses are more than honorable, while her weaknesses - passable sensors, speed and spin - are common things for a ship of this class. Rumor has it that the Mandalorian clan even demanded Manglers as payment when the Empire bought their services. 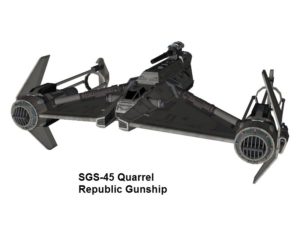 Sienar's SGS-45 Quarrel is equipped with interchangeable models of long-range submachine guns, providing it with both firepower and versatility. Its mediocre speed and maneuverability are comparable to any of the Gunner-class, but it can strafe quickly and has an impressive communication range. Pretentious fighters laugh at the "rather mundane" appearance of the Quarrel until they see an experienced gunner devastating an entire enemy squadron without taking any damage.

There are two types of bombers. One of them contains a turret drone and missiles while the other contains exclusively mines. The bombers will be available in February.

The B-4D Legion and Warcarrier bombers use drone technology. Drones can be used to attack enemies, strengthen and repair allies, and offer new strategies on the battlefield. In addition to its basic laser cannons, they can equip a missile or a mine as a secondary weapon in order to be even more deadly.

The Razorwire and the Rampart Mark Four are the ultimate minelayer. They carry many mines and have a large number of ammunition to set traps, barricade and protect any location. Their poor maneuverability make them quite weak in dogfighting (fighting in motion, fast, dynamic).

What will be your choice ?