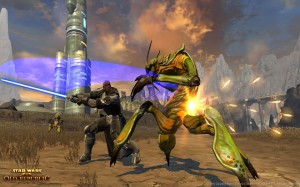 Hello everyone, as you all know, update 2.6 radically changed our little Vigilance / Vengeance specialization, so I'm going to rely on the guide I made last year to update the cycle and the optimization / equipment part. 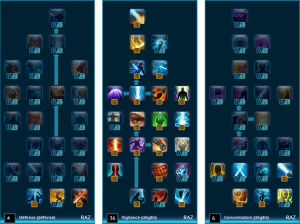 Among the most important points: the 8% damage on Expert Strike, these are the biggest damage resources. Preparation is a very useful and enjoyable skill when you do your daily work, but to go on a raid, it is totally unnecessary. We prefer the Fatal Throw which allows you to jump on the boss having already put the broken armor.

You will be able to notice the huge change in Zen Strike: Instead of having a 30% chance to negate Expert Strike cooldown while using Plasmic Iron or Impale, we now stack a charge. After two charges, Expert Strike is available again.

This ends the very randomness of the Guardian's damage. We will now see what it is at the cycle level. 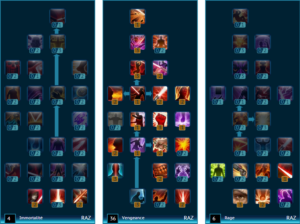 Among the most important points: the 8% damage on Rampage, these are the biggest damage resources. Visceral Hate is a very useful and pleasant talent when you do your day laborers but to go on a raid, they are totally useless. We prefer the Fatal Throw which allows you to jump on the boss having already put on the broken armor.

You will be able to notice the huge change in Vandalism: Instead of having a 30% chance to negate the Cooldown of Rampage using Air Slash or Shatter, we now stack a charge. After two charges, Rampage is available again.

This ends the very randomness of the Ravager's damage. We will now see what it is at the cycle level.

Guardian Vigilance and Ravager Vengance are both Damage Over Time (DoT) classes. However, your biggest source of damage will come from your Expert Strike / Rampage. These attacks represent at least 25% of your total damage, because the originality of this specialty is the chance to refresh the cooldown of these two skills using Plasmic Iron / Shatter and Air Slash / Impale.

I was talking earlier about Damage over time: 3 attacks will allow you to land damage.

The object of the game is to maintain these 3 Damages over time as long as possible. The Plasmic Iron / Smash is the easiest to keep, as the cooldown of this skill is 12 seconds, like the duration of its damage over time. Aerial Lunge / Impalement et Blade Storm / Force Cry both have 9 second cooldowns for damage lasting only 6 seconds, you will not be able to consistently keep all 3 together but it is imperative to never drop below 2 active damage over time. This is because your burn damage is around 18% of your total damage, so it's imperative to keep it up for as long as possible. 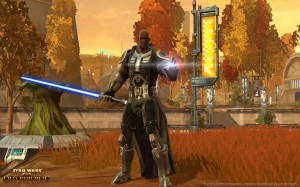 The cycle of 2.6 is in my opinion much simpler than before, because by removing the random aspect, we now have a well-defined cycle.

Storm of the Blades

Here is the cycle that you should try to maintain throughout the fight. First change compared to before: it is no longer necessary to launch the Storm of Blades as soon as the 2 charges of Deluge of force are there, priority to Frappe expert, if you are using a Air slit or a Plasma iron or to elimination when you have two, that's okay.

If you do your cycle well, you will have enough energy not to use the Strike at all, so a big damage gain in perspective!

Here is the cycle that you should try to maintain throughout the fight. First change compared to before: it is no longer necessary to launch Force Cry as soon as the two charges of Massacre are there, priority to pillage, if you use a Impale or a Weak or a Vicious throw when you have two, that's okay.

If you cycle well, you will have enough energy to stop using your cycle at all.Assault, so a big gain in damage in perspective!

To sum up, in both cases:

2) Keep Plasma iron / Smash, Aerial Lunge / Impalement under recharge, in other words: launch them as soon as they are available! If you have your two loads of Flood of Force / Massacre, no big deal, relaunch (of course if you have a Expert Strike / Rampage available, put it before so as not to lose one ...).

On a well-mastered test, you should have a Expert Strike / Rampage every 9,5 seconds or so (correct if I'm wrong).

I am going to talk here again about a tip on which I had already written an article, but as much to give a layer because it is very important! As you may know, Expert Strike / Rampage damage doesn't quite match the animation of these skills.

Let me explain: these two attacks involve 3 hits, for a channeling duration of 3 seconds. However, the last blow does not strike at 3,0000 seconds but at around 2,6 seconds. We lose 0,4 seconds per expert strike / rampage by leaving the animation to the end. It is a big waste of time, therefore damage during the fight.

The trick is there: you have to cut the pipe using an offensive skill at 2,6 sec. In the cycle shown above, this parameter must therefore be integrated. I made a little video to explain this following requests on the US forum:

Besides the 0,4 seconds saved, what will this tip bring me? Well, we're just going to bring the last shot of the expert strike / rampage closer to that of the second skill. Indeed, by doing this small manipulation, the last hit of the Strike and the damage of the next skill will be so close in time that they will be almost confused and will therefore be a big peak of damage (see the link in the log that I post below).

Relics of Unexpected Assault: Késako? These are relics that have a 30% chance to give you a big power bonus (740 for the Dread Forge for example) every 20 seconds and for 6 seconds. These relics are ESSENTIAL!

The second relic will be a Relic of Concentrated Smite (740 primary stat for Dread Forge).

With the arrival of equipment 78, the optimization will change a little. Indeed with a full 78 equipment (and well optimized), we have a huge reserve of Vigor and Power, so I think it is better to put criticism. I'm currently playing with Crit Rating 144 which equates to 2 crystals and critical / influx sophistication.

Why put criticism? For me the most important for a damage class is consistency. Indeed it's good to hit hard, but if it takes ten tries to get there, it's not great ... After many tests, I therefore opted for criticism, because it allows to smooth the damage and have a much higher average dps (damage per second) than in full power. Obviously the perfect try is: full power + a lot of criticism .... As much to play the lotto, it will take a long time to do something good!

In terms of precision, once well optimized, we reach a cap of 99,67% (by putting a precision modification on a piece of equipment).

Here is a link describing my equipment.

This part is there to give an example of dps, I do not want to make a contest. But you will be able to see that this update brings a lot in terms of damage (good maybe even a little too much considering the very basic cycle of the class, but hey ...)

Here is what I have done best for the moment.

In particular, you can see an example of what a final hit of Expert Strike / Critical Rampage coupled with Elimination / Vicious Throw at the 173rd second can do. It's those damage spikes, created by cutting off the Expert Strike / Rampage that will help you out, so practice well.


Do you want to be up to date and know all the tricks for your video games? In gamesmanagers.com we enjoy playing as much as you do and for that reason we offer you the best tricks, secrets or tips for you to play non-stop. We offer you quality content and always updated to keep you up to date. That's why, in our website, you will find not only videogame guides but also tricks, secrets and thousands of tips so you can play to the limit. Are you ready to get it? Enter now and enjoy your videogame!
Mortal Kombat: Test your might ... soon ❯