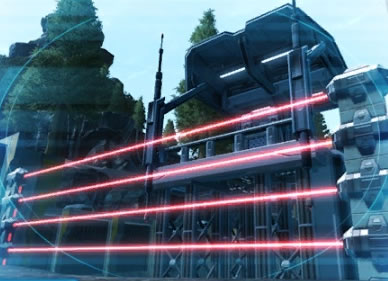 Curious readers, the past few weeks we have defeated the first half of Operation Denova in hard mode and we are gradually getting closer to Kephess. The 3rd and penultimate boss of this operation is Colonel Vorgath and even if I will not dwell too much on this fight it requires above all a good concentration for the whole group and a DPS ... sufficient. Compared to the previous post on this same site and concerning combat in normal mode, the differences are slim, so I will go over some generalities, sometimes making comments and of course adding what is different and that it is important not to miss.

Overview of combat and general mechanics

Phase 2, Vorgath and his adds:

The tank must not hang around to choose the path that the raid will have to take, we at Illendar prefer to stick to the left wall as much as possible in order to avoid an angle on the right part of the field but also to avoid being bumped into a Red zone.

So take the first green square available from the left and activate to advance the raid as quickly as possible, there is an enrage on the course, causing a very fast wipe if you drag.

Do not forget the healers, that when the tank makes the probes appear, we can heal him and apply a shield or protection to him to help him in his fight against the mob that arrives in the pod.

The probe which is discovered by the tank makes 2 relatively short spells that must absolutely be cut. One makes fly back and the other one hurts, you will need 3 people most of the time to break them all. To break the spells, I am in favor of defining before the fight how to organize, improvisation is funny but ultimately annoying at the end.

Give an order for your 3 players with an interruption, ideally the tank (Bulbiz for example) and 2 DPS Tsubaki and Kala'han (the healers not having the focus on the probe are playing with the fire of their assign this mission).

When Bulbiz breaks the first spell, he announces “Tsubaki” as the next to be interrupted, then Tsbuaki after his interruption announces “Kala'han” and so on. It is from my point of view the simplest of the methods. It sounds "childish" but after 5 minutes and the spells are short enough, an error of inattention (a spell that passes) or a lack of confidence (two players use their interrupts simultaneously) and it can mess things up.

Two droids "trapped" and exploding on contact with a player will appear in the distance, slowly they will approach the RAID to cause area damage to the whole group. With us it is Keilan who takes care of it and he proceeds as follows:

For the 3 “classic” adds, don't hesitate to keep one of your area damage spells (AOE) to make them fall quickly and all at the same time, because they often hit and hinder the tank and the healer. They don't like it and then they sulk, they moan etc.

Once the minefield is deactivated (there is a panel on the right) and the second tank joins the group, we attack the end of the fight which remains quite simple when concentration is maintained.

You have to get your two lieutenants down, which presents no difficulty. Be careful during this phase Vorgath does not snore, he hits / shoots and performs the spells listed below.

For the red zone that pops under an Operation member, don't panic, you have a few moments before it explodes, just make sure you're away from other players. Avoid going through the whole raid when you walk away, go shortest by turning around and don't run like a headless chicken through all the players in melee for example.

For other players, do not try to anticipate the movement of the target player, let him move away. Also avoid remaining melee to keep typing as Vorgath can send you flying at another player, inflicting damage on you and the innocent player you were thrown on.

Vorgath announces that he will change target several times during the fight, the latter must be re-provoked by one of the two tanks, communication here is the easiest way not to burn his provocation spells unnecessarily.

Four turrets will also appear, we usually kill two (the closest) and let one of the two tanks take aggro on the remaining two (leaving one or two alive avoids a repop of four new turrets).

The essential tools of combat

The tank must quickly spawn the path and throughout the fight summon probes quickly. The slower you are, the greater the chance of getting minefield enrage (= wipe)

Don't skimp on the DPS you need to kill the probes. Missing one is almost synonymous with minefield enrage (especially if your route contains a lot of red zones).

Organize the probes' spell interruptions so as not to miss them (= wipe).

Stay focused throughout the fight, whether it's breaking probe spells or avoiding red areas or bomb defusing or even droid depop

Do not forget about the adds that can pollute the healers in their mission. Vorgath may be simple, your healers will have already committed quite a bit of force or ammo, avoid unnecessary damage.

Good luck to you !