SWTOR - How to treat? 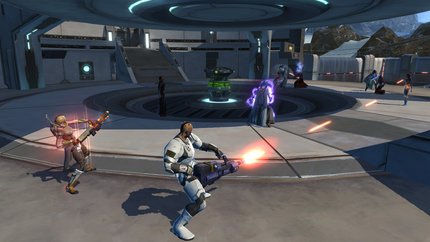 Here we are going to talk about the heal gameplay of The Old Republic in general terms. What is important to know? What is similar to what is found elsewhere, what is new? You plan to play heal, this is what to expect!

You are playing a WoW-like, deal with it!

If there is one thing to integrate about SW: TOR, it is that we are talking about a WoW-like, understand by this that if you have played WoW or a game similar to it in terms of of gameplay, you will not be lost. The main principles, the interface, the keyboard shortcuts, everything is quite similar to the title of Blizzard which has dominated the world of mmorpg for the last seven years. Here is a non-exhaustive list of the various things to know as a healer: Anyway, I won't go into too much detail, it's a WoW-like, I think the vast majority of readers of this blog see what I'm talking about. The points on which SW: TOR differentiates itself from its competitors obviously exist, and I will go into a little detail about those that relate to skincare.

Small originality compared to WoW which changes a lot of things for us healers, the basic format of a group is four people, and not five as in a lot of games. By extension, the operation formats are 8 and 16 players. And the maximum number of players that an operation group can contain is 24 (for World Bosses or wild PvP like Illum for example). 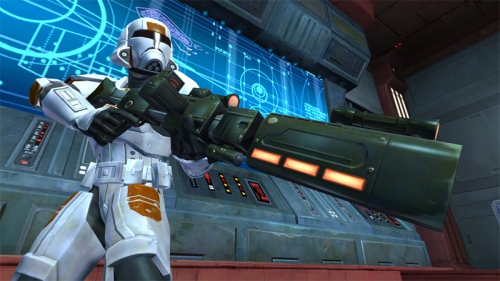 This means that our basic set-up of people to heal is 4 targets: a tank, two dps and ourselves (it will necessarily be a little different in operation, and we cannot say at the moment if the heal / player ratio will be higher or lower than in groups of four). Overall, we will still have fewer targets to worry about than in a lot of other games. It can be interpreted as a sign of a certain simplicity, or quite simply to announce a need for more intense heal on few targets. Basically you have to launch three heals per person on 5 targets, or 4 heals per person on 4 targets, overall it's the same in terms of gameplay intensity. So we are not going to put the plow before the Bantha or sell the skin of the Rancor before we have killed it (please shoot me down on sight for those two shameful comparisons, please).

In terms of anticipation, according to the operation videos we saw and the smaller group format, we can expect a rather quiet heal rate compared to some more hardcore gamer oriented games. The vital question seems to be the optimized management of resources so as not to run dry at the wrong time, rather than the responsiveness at any time to keep your group alive. It is anyway very difficult to really anticipate the difficulty or the gameplay style of the game at high level since we have seen little, if at all, when it comes to heroic difficulty.

The main heal mechanisms Once again, do not expect too much originality in this area, overall, for the glimpses we may have had, the main systems that will influence your gameplay as healers use well-known principles of the genre. : In short, we are here in familiar territory, these various principles are generally used by other games but remain the basis of our future gameplay. The details are for the moment under NDA, you will know everything there is to know about this side in the guides for each class. It is ultimately the association between these classic elements that will determine a rich and original gameplay ... or not.

If there is one thing to remember that is specific to the role of healer in The Old Republic, it is the question of resources, because it is in this area that SW: TOR stands out from its predecessor and competitor World of Warcraft. . Where WoW like many other games features a stat-based resource system for healers similar to all classes (mana in the majority of cases), Bioware's new baby stands out with a different resource system for each of the classes of healers. Thus, if the Jedi Scholars and Wizards have strength points, a large pool of resources that regenerates slowly and is ultimately what comes closest to what we know in other games. Secret Agents and Thugs for their part have an energy bar quite similar to that of rogues in WoW, smaller but which regenerates faster. Finally, the Commandos have on their side Ammunition in small quantities, but which are recharged very quickly, while their side the Mercenaries have on the contrary a small overheating gauge which charges with their skills and dissipates quite quickly. when no skill is used.

In short, you will have understood it, on this side, we will have something to be a little bit confused, and I dare to hope that it brings a good richness of gameplay as well as a real replay value in the fact of playing several classes of different healers. In any case, the beta feedback is pretty good on this point. Afterwards, if this system is very promising and announces to us healers who follow each other but do not resemble each other, the big unknown remains the question of balancing. When we see that the developers at Blizzard had spoken a lot in a blog post about the difficulty of getting out of the mana system for healers, we say to ourselves that there is a way that it is not that obvious (or so that they fabricate to death, but still doubt it).

The absence of macros and add-ons at the exit

This is a subject that had already been discussed here and was confirmed in an interview, the game will not have support for add-ons and macros upon release. For us healers, this is a sensitive subject since we are traditionally the players who use this kind of devices the most to make our lives easier. I'm not trying to start the debate for or against gameplay aids, each one has their own style, personally I prefer to fight against my opponents than against my interface.

In any case, according to what was said in interview and what I could hear during conversations during the PGW, these options should come quickly after the release. Personally, I keep my fingers crossed to make it happen quickly, because I know that the interface will quickly frustrate me. Since we talk about it know that it looks like what we find everywhere else, it is just slightly less modifiable and customizable than the standards of the genre.

Conclusion: healing in The Old Republic

This article should give you a little idea of ​​the frameworks in which you will evolve on the game that you all expect. If you were hoping for a revolution in the way you heal and play a mmorpg, you might be disappointed. If you fancy a little freshen up after WoW, Rift or whatever, chances are you will find what you are looking for. For the rest, you just have to hope and come and take a look during the open beta weekend which should take place in a week or two (even if unless you are a geek like a sick person, you It will be hard to really test the heal in detail over such a short period of time.

Moreover, your experience as a healer in The Old Republic will depend above all on the choice of your class, since they still have fairly clear and original game systems. Which is great, since the next article in this series which should be online in a few days will be about choosing your healer class. Cool right?


Do you want to be up to date and know all the tricks for your video games? In gamesmanagers.com we enjoy playing as much as you do and for that reason we offer you the best tricks, secrets or tips for you to play non-stop. We offer you quality content and always updated to keep you up to date. That's why, in our website, you will find not only videogame guides but also tricks, secrets and thousands of tips so you can play to the limit. Are you ready to get it? Enter now and enjoy your videogame!
SWTOR - Galactic History - Dromund Cheese ❯